Clay Ketter's Pirate Lane (2007) is part of a series of photographs showing the foundations of homes on the Gulf Coast of Mississippi, which were destroyed by a natural disaster of enormous scale – the hurricane Katrina. It acn be seen as a testimony and a reminder of our human interdependence and vulnerability. Climate change, hurricanes and viruses have no nationalities and know no borders. The artwork raises vital questions regarding the palpable global challenges conveyed by climate change, how to address responsibility for these changes, and what transformations and meanings the art work can convey in a setting like Stockholm School of Economics.

Clay Ketter’s (born 1961 in Brunswick, Maine) work is characterized by an uncompromising clarity, be it painting, sculpture or photographic work. Although following an evolutionary path which appears to be completely logical, Ketter manages to take the viewer by surprise by a skillful combination of content and execution. His artistic career originates in Sweden, which has been his home since the late 1980’s, while his work has been exhibited in numerous museums, art institutions and galleries around the world. Early on in his career, Ketter experimented with materials not normally associated with fine art: his Wall Paintings and Trace Paintings challenge the viewer as to the distinction between craftsmanship and art, often succeeding in the refutation of this distinction.

Through the years, Ketter’s art has evolved around more existential issues. Mankind’s futile struggle for protection against natural forces as well as other inevitabilities can be seen as the thematic backdrop for the photographic series Gulf Coast Slabs as well as his claustrophobic assemblages of doll’s houses. In these traces of human life and deconstruction, Ketter’s art pinpoints the fragility of our existence. Clay Ketter is represented in public and private collections in the US, the Nordic countries, France, Great Britain, Italy, Germany, Austria and Mexico.

The work Pirate Lane from 2007 is part of the series Gulf Coast Slabs. This series of photographs registers the foundations of homes on the Gulf Coast of Mississippi, which were destroyed by a natural disaster of enormous scale – the hurricane Katrina in 2005. Katrina is one of the most widely discussed natural disasters in the last decade, with unimaginable consequences for the people living in this part of the world. It raised numerous questions concerning the rapid climate changes as well as social-political issues. Shortly after Katrina hit the Gulf Coast, Clay Ketter read about the devastation and decided to visit the area. The titles given to the art works are the street names and numbers, sometimes even the names of the previous occupants, providing each work with a defined place.

”...with their ominous sharpness, their unsentimental documentary brute force, Gulf Coast Slabs cast an unexpected light on the artists entire oeuvre. They disclose something that – indisputably – has been there all along. Come to think of it, Ketter’s pictorial world has from the very start gained strength from this Pompeian ambiguity, the dual perspective of construction and ruin." Dan Jönsson, quote from the text Under the Volcano, Gulf Coast Slabs, 2008. 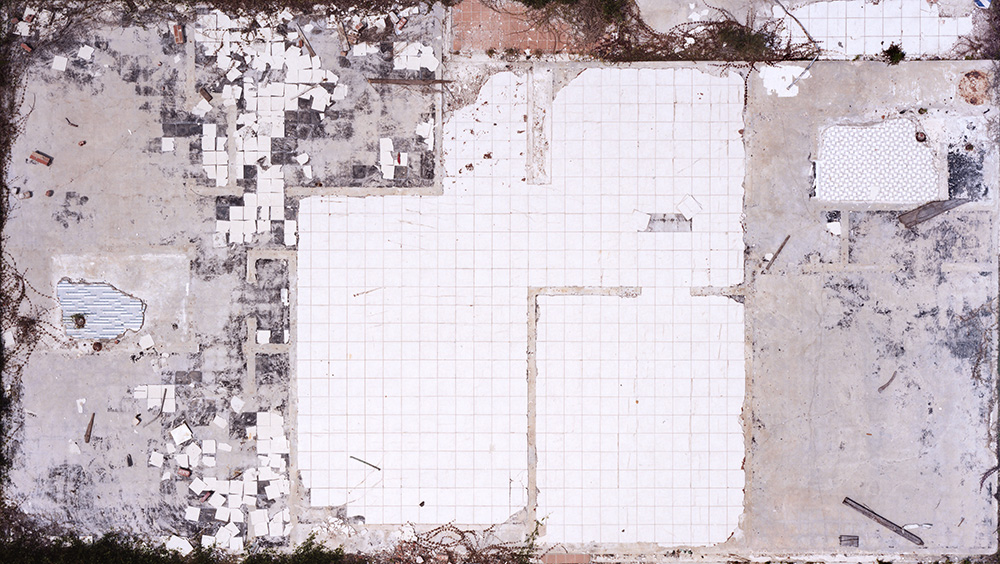 The work has been donated to SSE by Alumnus Lars Förberg and Lena Förberg in cooperation with Alumnus Cecilia Hillström.

"Pirate Lane (2007) raises vital questions regarding the palpable global challenges conveyed by climate change and how to address responsibility for these changes."