The six portraits that hang slightly above eye level in the board room at the Stockholm School of Economics, have been an integral part of the room for many years. The people in the portraits are either founding members, former presidents, or chairmen of SSE and connect the room with the school’s history. By and large they are rendered in a sombre, realist style and are today as much a part of the board room as are the chairs, the lamps and the carpet.

When entering the room, one’s attention is drawn to three paintings hanging side by side to the left of the main entrance. The men portrayed are Olof A. Söderberg (1872-1931), K. A. Wallenberg (1853-1938) and Joseph Nachmanson (1876-1927), all painted by the same artist, Ivar Kamke (1882-1936). The three men were the foremost supporters of creating a business school in Stockholm, more than a hundred years ago. 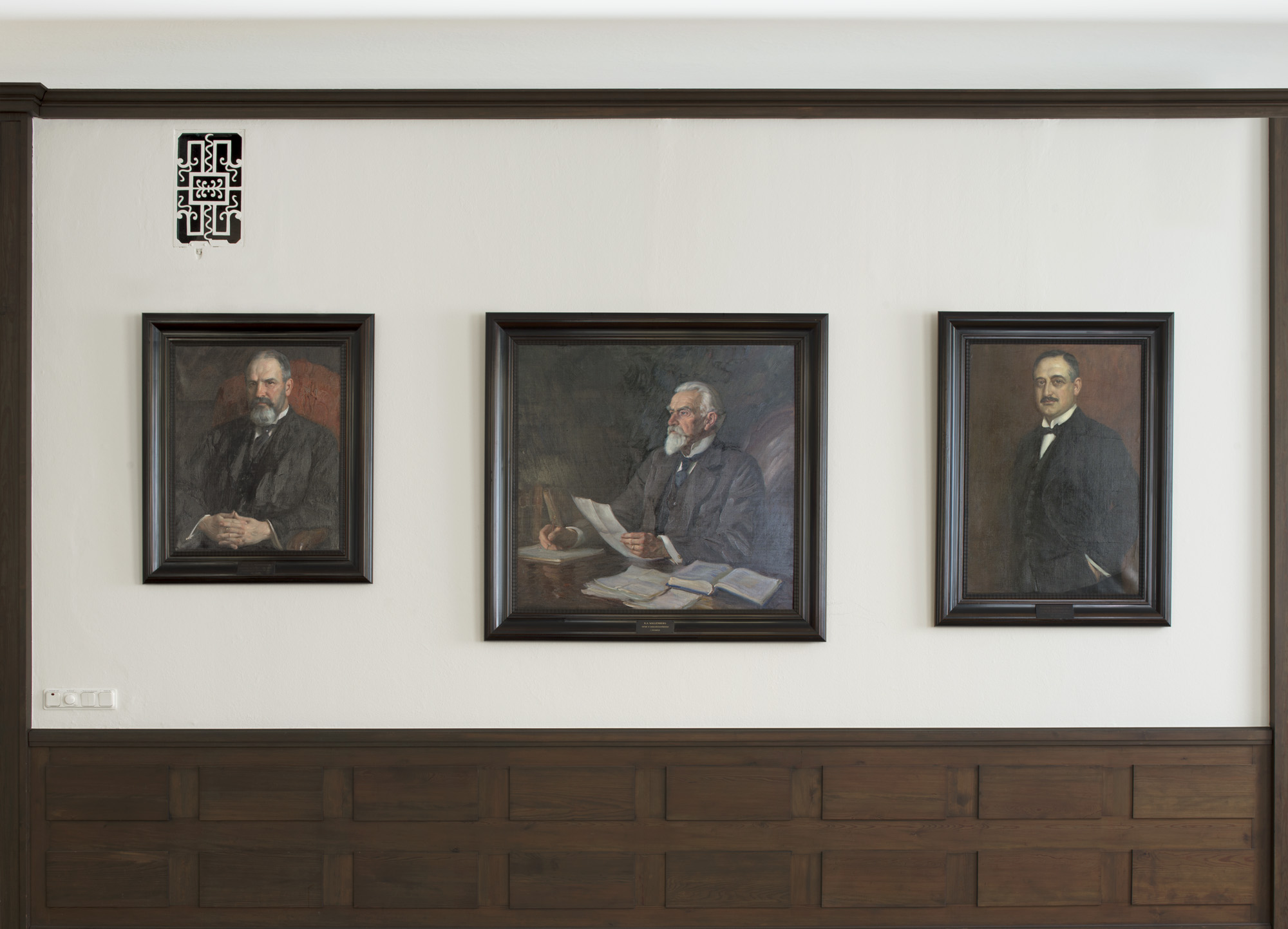 Olof Alfred Söderberg, together with his brother Per, inherited the family business Söderberg & Haak from their father P.O Söderberg, who played a significant role in the industrialization of Sweden by making steel the most important construction mate-rial in the new industrial era.

Knut Agathon Wallenberg followed in his father A. O. Wallenberg’s footsteps and became a prominent industrialist and politician. K. A. Wallenberg served as Minister of Foreign Affairs in 1914-1917. Together with his wife Alice, he formed the Knut and Alice Wallenberg Foun-dation with an initial endowment of 20 million Swedish kronor. Today the foundation is the largest private financer of scientific research in Sweden.

Joseph Nachmanson was one of the most prominent bankers in Sweden and a central figure in the development of several large corporations, among them Stockholms Enskilda Bank, founded by A. O. Wallenberg, the father of K. A. Wallenberg. Nachmanson was also part of the consortium that in 1903 substantially modernized the Swedish newspaper, Svenska Dagbladet. The artist Ivar Kamke, who was commission-ed to portray the “SSE founders”, was one of Oscar Björck’s students who would most closely follow in the footsteps of his teacher at the turn of the century. Early on Kamke stunned his teachers and fellow students with extraordinary technical skills in drawing and painting and soon became known as a skilful portrait artist. His brilliant artistic style is often compared to that of Anders Zorn, both in form and in the development of the nude figure in nature, a genre that Zorn excelled in.

The three portraits at SSE are painted in two distinct styles. K. A. Wallenberg looks as if he has just paused in his daily work to lift his gaze towards something the viewer can-not see, outside of the painting. Olof A. Söderberg sits in a large red chair, with no apparent surrounding objects, and his gaze is sharply focused on the viewer, or the painter himself. The third portrait, depicting a standing Joseph Nachmanson, differs stylistically from the other two. Nachmanson is standing casually, with one hand in his pocket, a stance that was considered fashionable at the time.

Right across from the trio of founders, the portrait of the first president of SSE Carl Hallendorff (1869-1929), painted by Märta Rudbeck, hangs on the wall between the large bay windows. Hallendorff was an historian and lecturer in political science and economic history. In 1908 his experience convinced the SSE Association that he was the right man to be the first president of the school, scheduled to open a year later.

Märta Rudbeck (1882-1933) was a Swedish painter and graphic artist, most famous for her colourful depictions of flowers. At the turn of the century she studied at the Caleb Althins School of Painting as well as at the Royal University College of Fine Arts, both in Stockholm. In the portrait of Hallendorff the forward leaning position of his body suggests movement. For Rudbeck creating an impression of movement was very important when arranging and painting portraits. The tone is reminiscent of Rembrandt, with just the face and the left hand of Carl Hallendorff clearly visible. 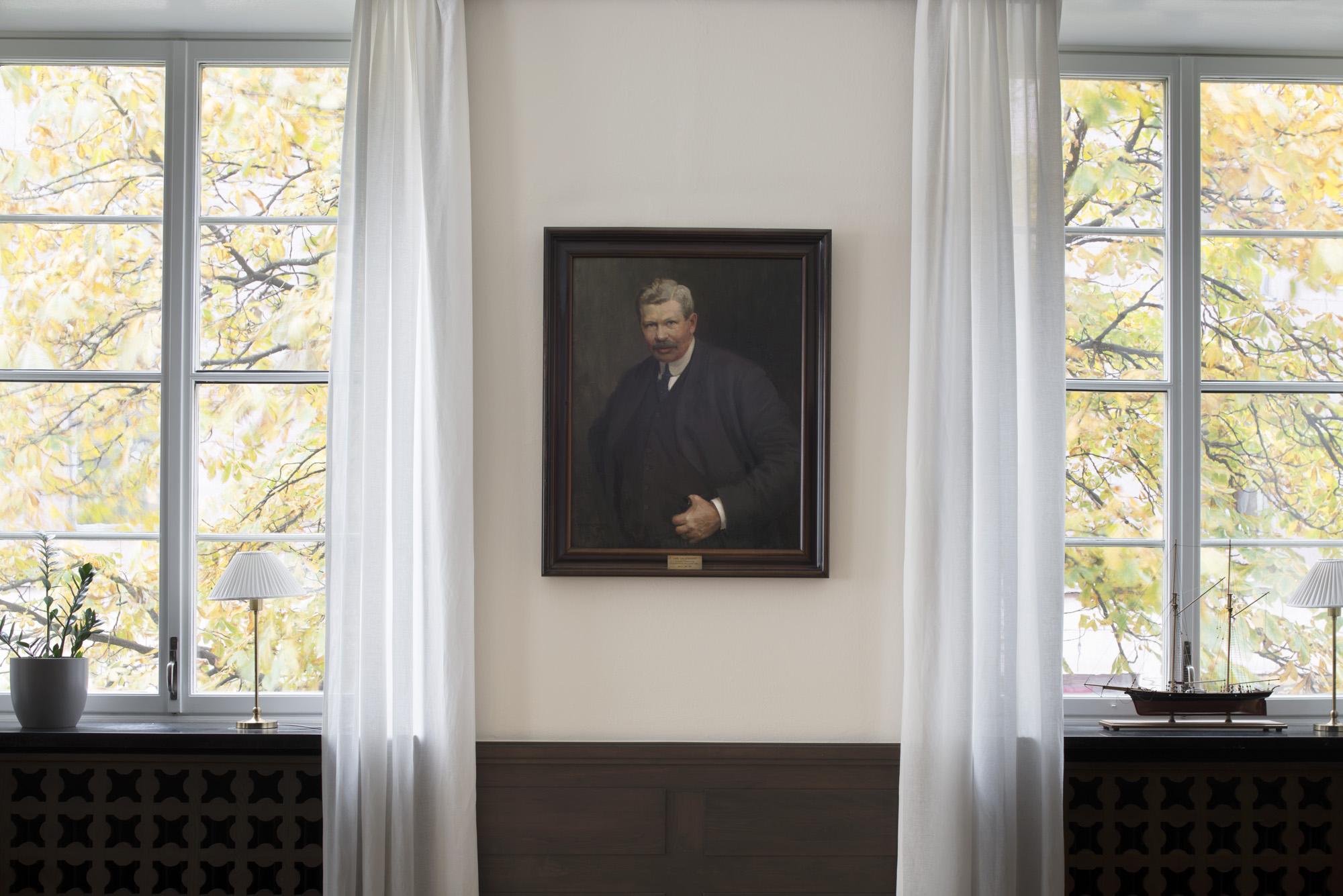 On the same wall, there is a portrait of the first Chairman of the Board of Directors of SSE, Alfred Lagerheim. It was painted by Anna Cervin (1878-1972), from an original by Emerik Stenberg. It was not an uncommon practice to copy old paintings — often family portraits — in order to preserve the original or simply to have many copies of the same portrait. Carl Herman Theodor Alfred Lagerheim was a diplomat and politician, most notably serving as the Secretary of the Swedish State Department in 1899-1904. The Swedish government appointed Lagerheim to be the first chairman of the Board of Directors in 1909-1924. Anna Cervin was a Swedish painter educated in Stockholm and at the Académie Colarossi, Paris. She mainly painted still lifes, landscapes and portraits. She became well known for copying and revitalizing old, badly preserved portrait paintings. In the first half of the 20th century Cervin was included in several exhibitions featuring women artists, such as Fem målarinnor (Five Women Painters) at the Värmland Museum in Karlstad. 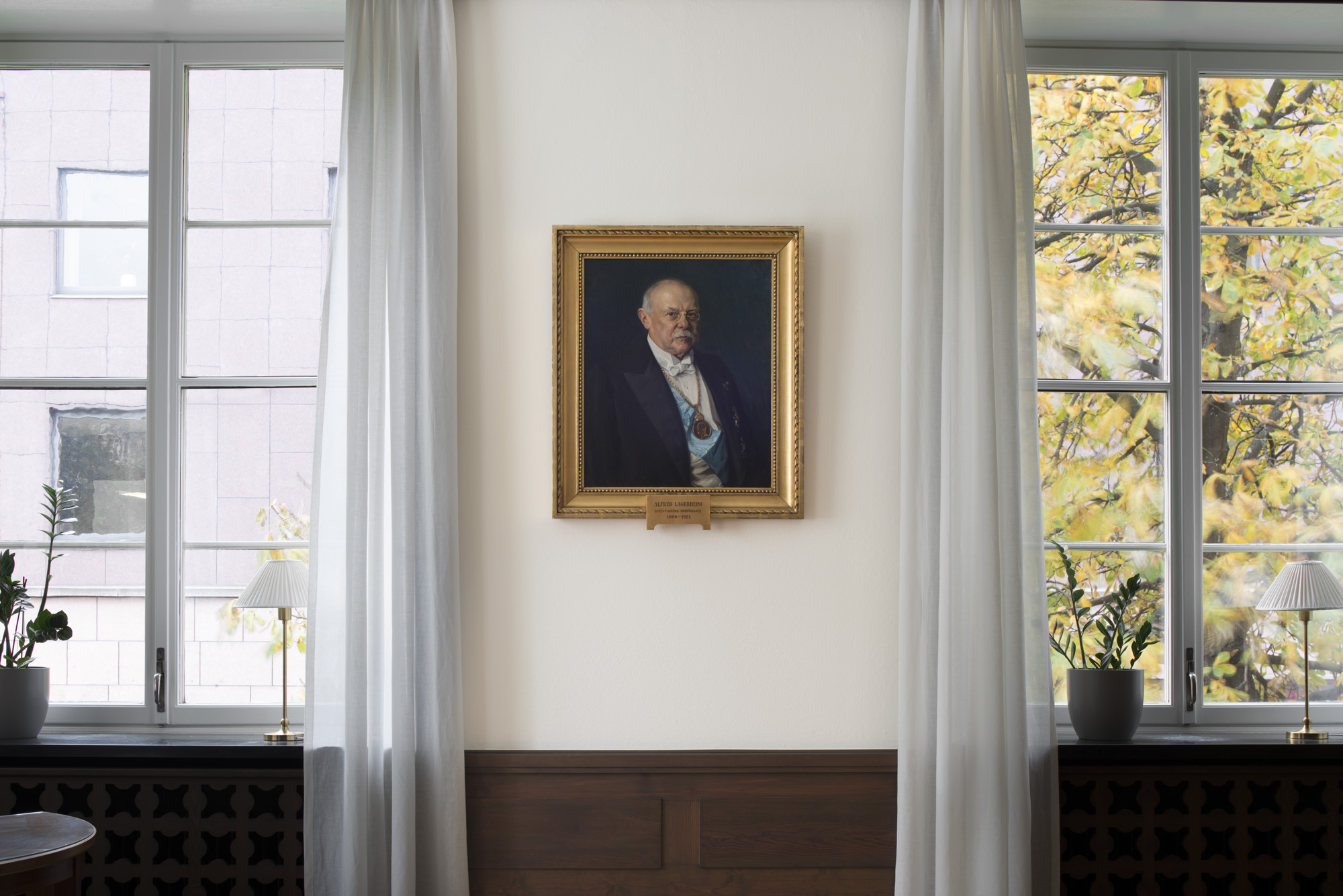 The portrait of Alfred Lagerheim was from an original painting by Emerik Stenberg, a Swedish portrait painter in the tradition of Anders Zorn. The painting in the board room has several features that were clearly influenced by portraits by Zorn. This influence shows most notably in the brightly lit middle of the painting, starting with Lagerheim’s face and contin-uing vertically downwards, revealing the medal of the Royal Order of the Seraphim (Kung-liga Serafimerorden), which he received in 1900.

The sixth portrait hangs on the wall toward Sveavägen and depicts Ragnar Söderberg (1900-1974), one of Olof A. Söderberg’s two sons, the other being Torsten. It was painted by the Swedish artist David Tägtström (1894-1981). Ragnar Olof Söderberg was a businessman and donor, as well as an alumnus of SSE. Between 1954 and 1973 he served as a member of the Board of Directors and as the Chairman of the SSE Association in 1968-1974. 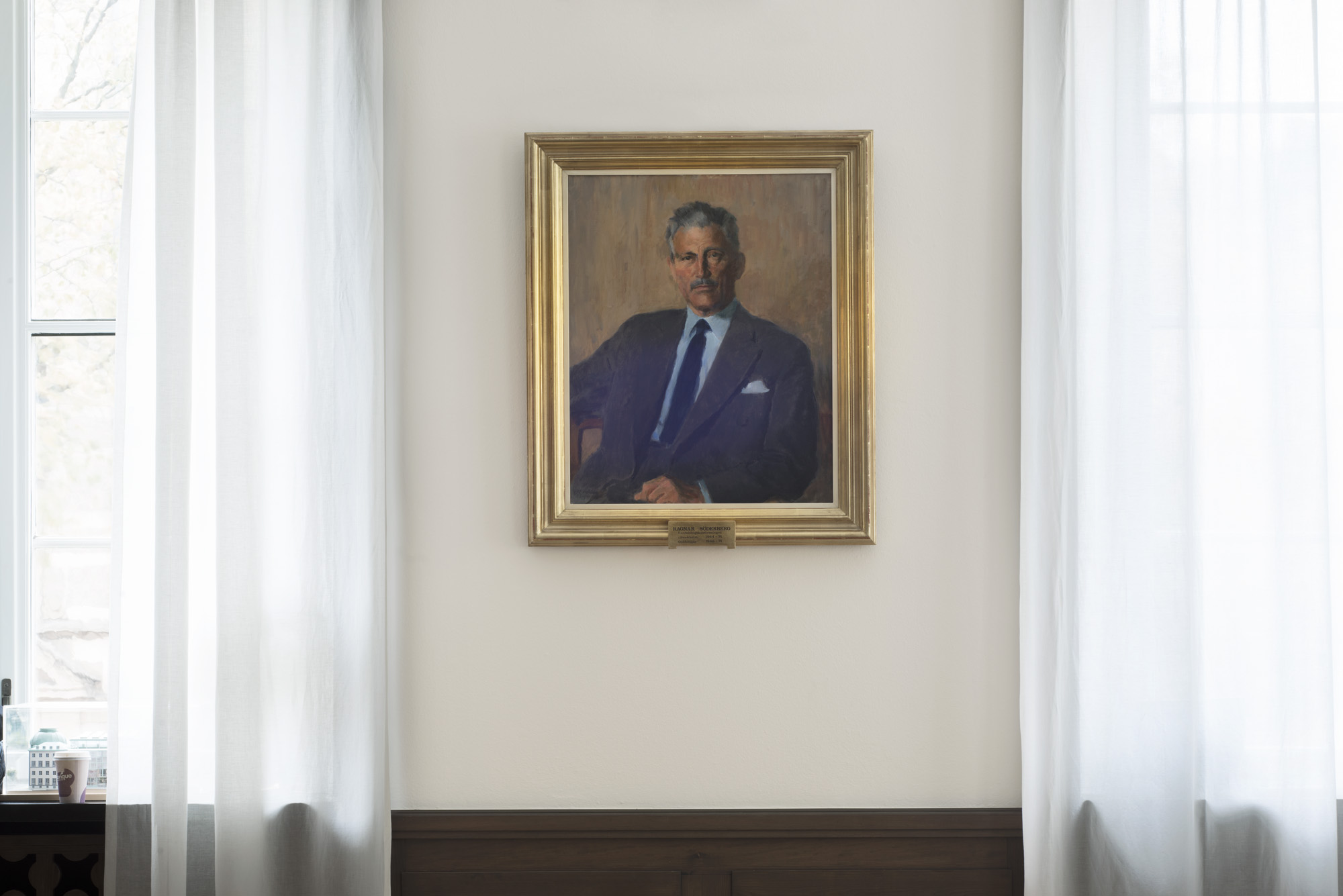 David Tägtström was a graphic artist and painter, well-known for his portraits of famous people including Queen Louise, Prince Eugen and Villhelm Moberg. His style was influen-ced by modernist movements such as post-impressionism and Austrian expressionism, and was developed through many of his portrait commissions. This portrait is the most recent in the room, made posthumously in 1976 and shows Söderberg in a relaxed, calm position with his gaze toward the viewer. The face looks asymmetrical and when one covers either side of the face, two different men appear: one old and one young, but suggesting slightly different temperaments. Tägtström has successfully captured two different versions of Ragnar Söderberg, creating a vibrant surface in an otherwise solemn space.