During the summer of 2022 the British-Nigerian artist Yinka Shonibare CBE and his studio have created the Yinka Shonibare Room in the school´s main building at Sveavägen 65. This is SSE´s fourth art classroom, and a chance for students and researchers to further explore questions like globalisation, cultural identity, the implications of colonialism and the economic and political relationship between Africa and Europe. 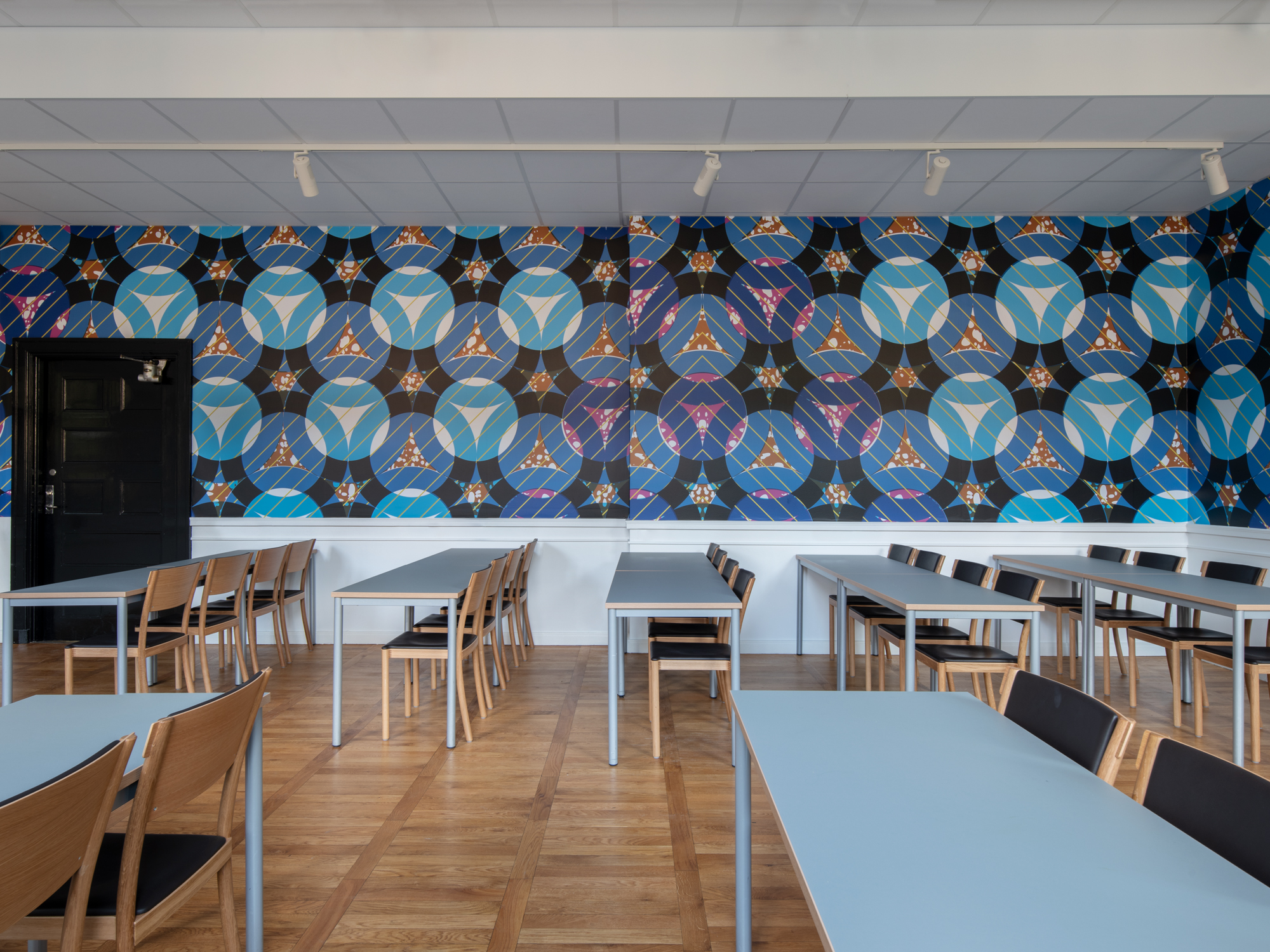 Yinka Shonibare CBE is one of the world’s currently most widely-acknowledged artists. He was born in London in 1962, grew up in his family’s native Nigeria, then returned to the UK to study art. During his long and succsessful career he has been exploring national identities within the context of globalisation. Through examining the implications of colonialism, class and the construction of cultural identity, his works comment on the relationship between Africa and Europe, and their respective economic and political histories.

Yinka Shonibare CBE works in different techniques; painting, photography, performance, film and sculpture. His signature material is the colorful batik fabric that is considered genuinely African despite having a completely different origin. The fabrics are in fact inspired by Indonesian design, mass-produced by Dutch people in the 19th century who sold them on to European colonies in West Africa. There, the textiles became very popular, which led to them ironically becoming a symbol for Africa.

The classroom contains a mural painting (picture on the top of this page), black and white elements and a small library with 107 hardback books, Dutch wax printed cotton textile and white painted wooden shelves, and is made thanks to a collaboration between SSE and The Princess Estelle Cultural Foundation.

The room was made possible thanks a generous donation by Ola Källenius, Joakim Weidemanis, Thomas Ranje and Steffen Karlsson. 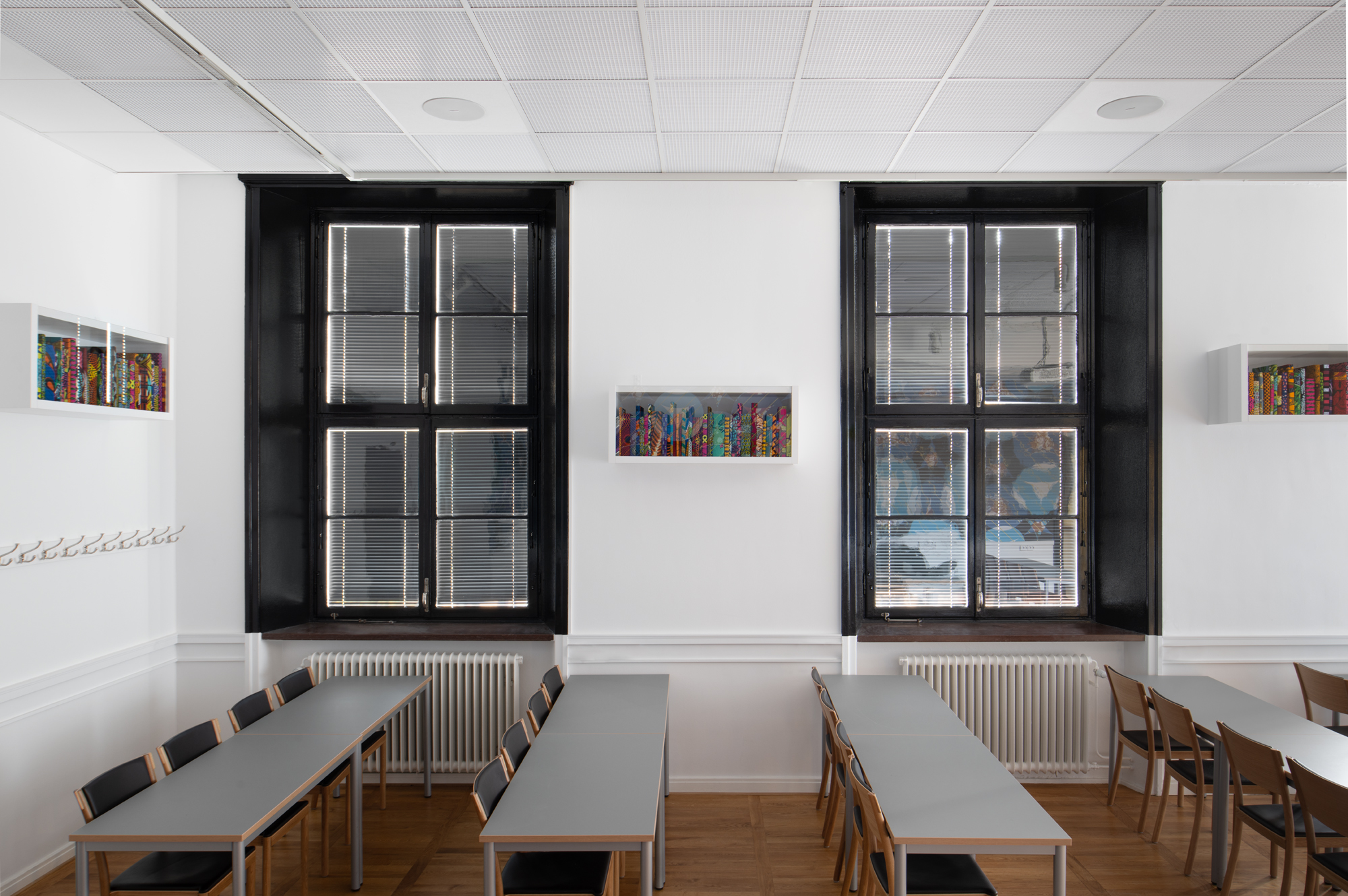 In 2004 Moderna museet in Stockholm invited Yinka Shonibare to participate in a programme of collaboration. On that occasion he created the artwork “Vasa in a Bottle” (a small version of the Vasa ship with sails made of batik fabric, part of the Moderna museet collection) and video film, “Un Ballo in Maschera” produced by the museum in collaboration with SVT Drama. Watch a documentary on the making of the film here at SVT Play (until January 4, 2023).

(CBE is a title that Shonibare added to his name two years ago, when he was appointed Commander of the Most Excellent Order of the British Empire.)

Find more information about our other art classrooms:

Shonibare describes himself as a “postcolonial hybrid” and regards the cotton batik fabrics as a metaphor for migration and as his most crucial work material.

Stockholm School of Economics is a place for science and learning facts. But it is also a place for reflection, for cultural literacy and creativity. The new class room is an excellent pedagogical environment. It is designed for learning, and it sheds light on subjects and issues that are central to a social scientific academic institution such as SSE. The new room activates our senses and thereby the potential for multi-facetted learning. I am extremely grateful to the artist, the Princess Estelle Cultural Foundation and our generous donors for materializing this project.
Lars Strannegård
SSE President