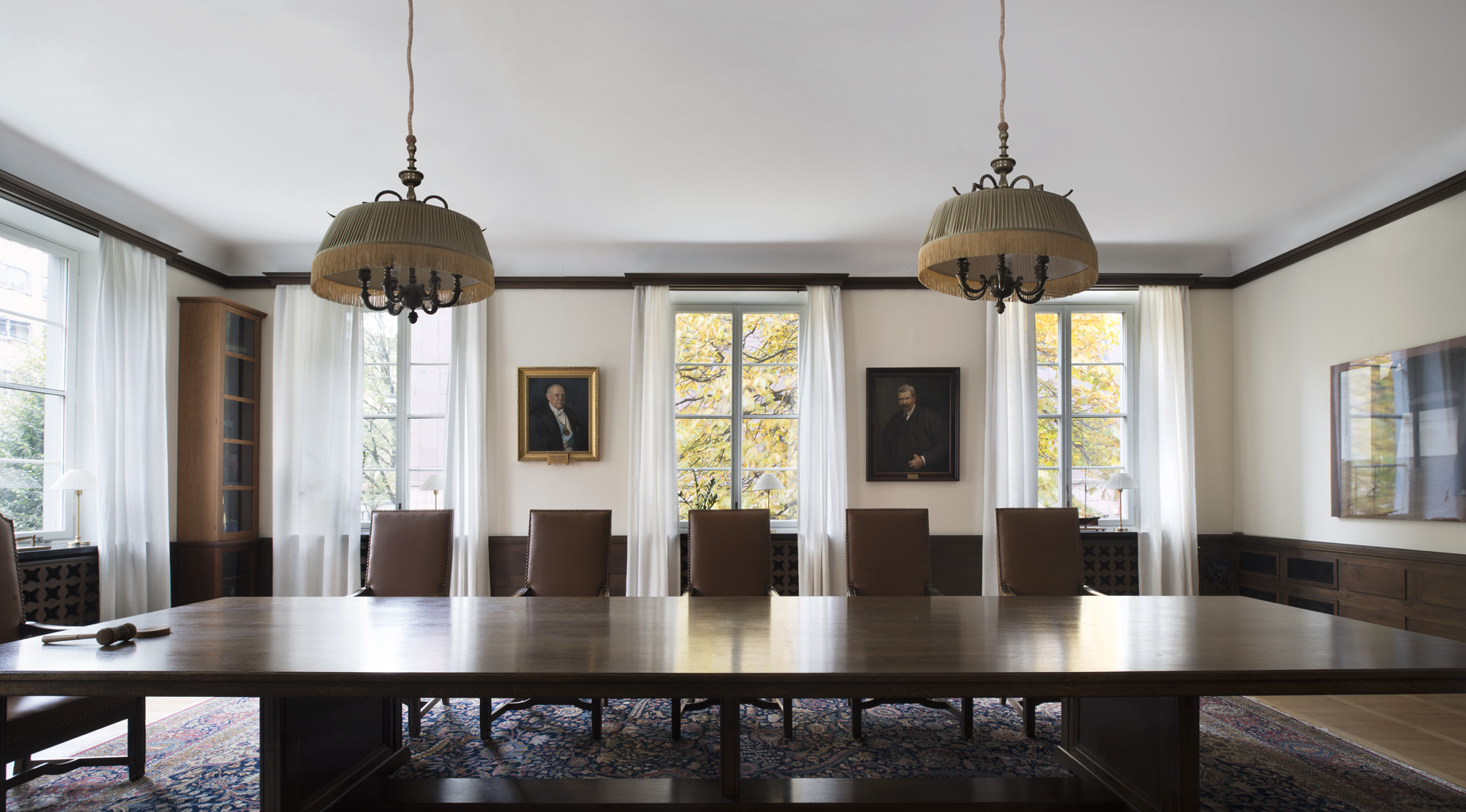 The board room project was initiated to aesthetically delve into the history of the Stockholm School of Economics. The Board Room perhaps more than any other space in the school, signifies the intersection between past traditions and present value systems and was therefore the perfect place to start. The approach used was to, with deep respect for the past, put this symbolically charged space in a historical perspective. The idea was to pay tribute to the room's original aesthetic and symbolic qualities, and meanwhile to shed light on the past through the lenses of today. Thereby, the hope was that a more multi-facetted understanding of today's society could arise.

Located on the ground floor, right next to the president's office, the Board Room is sparsely furnished with heavy, high backed armchairs, and a large table in the middle of the room. The walls are decorated with portrait paintings, each of high significance for the room and the Board Room project, since the people represented in the paintings are all men. In one sense, it would have been easy to get rid of the old art and furniture and just replace them with something new, marking the expansion of the school and its historic changes. changes. But this was not the idea. Instead the artworks Somewhere else by Maria Friberg, and Konsekvensanalys by Bella Rune were added to the room. Moreover, Art Initiative invited the writers Therese Bohman, Ingrid Elam and Dragana Vujanović Östlind to contribute with their respective layers of reflection on the Board Room and the new artworks. In addition, this publication includes texts about the portraits, the history of the Stockholm School of Economics as well as its architecture.

The photographic work Somewhere else by Maria Friberg is an important artwork by an artist that is at the forefront of rethinking gender and power structures in both society at large and in the world of business. It poses a spiritual rumination of the very physical representation of the room and its inherent cultural norms.

The digital work Konsekvensanalys by Bella Rune is an immersive artwork that uses augmented reality technology. It treats the current environment as a canvas to integrate new, virtual objects that interact with the past, the present and the future. Augmented reality became a household technology in the summer of 2016 when Niantic and Nintendo released the mobile game Pokemon Go, which created a global phenomenon that transcended age, gender and culture. The artwork similarly works with any mobile device onto which an app can be downloaded for free.

First and foremost, we would like to thank the artists and writers. We would also like to extend a big thank you to Art Initiative's funders Josefsson Foundation, Ragnar Söderberg Foundation, and the wiwen-Nilsson Family who made the Board Room project possible. Furthermore, we would like to thank the Art Initiative Advisory Board, chairman Per Josefsson, Daniel Birnbaum, Emma Stenström, Sigrid Sandström, and president of SSE Lars Strannegård for all their support.