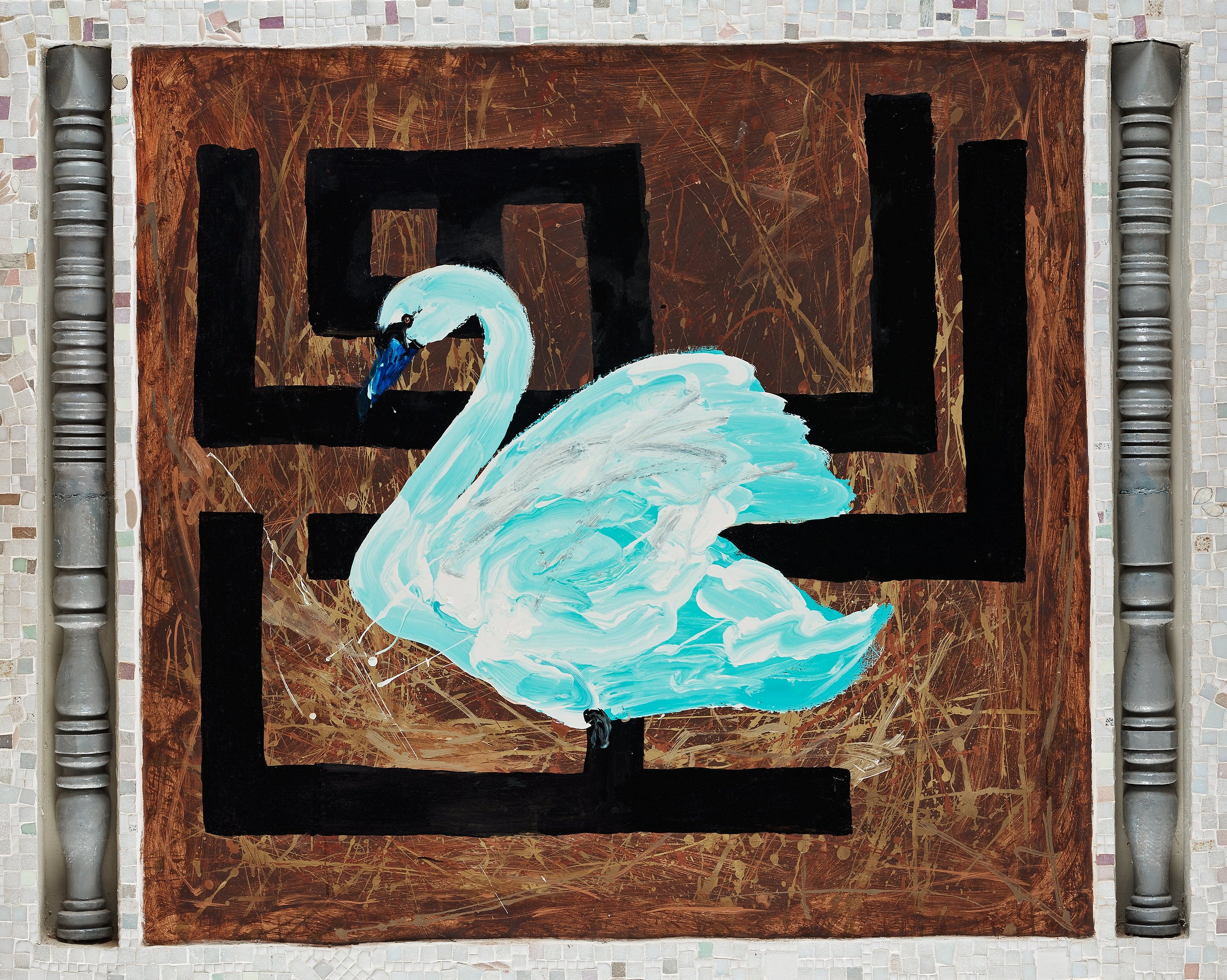 The Swan Song of Anthropocentrism

On Ledas Svan by Ernst Billgren

In Ernst Billgren’s symbolically charged work comprised of ceramics, painting, and mosaic, we face a depicted swan. With its dark, blue beak, it resembles the trumpeter swan, a species whose feathers were in high demand due to its use in adorned fashionable hats and writing quills. Intensively hunted, it was facing near extinction and it was only after aggressive cultivation that the species started to recover in the 2000s. The swan is connected to many myths including the swan of Leda (Ledas svan) from which the artwork has taken its name, a Greek myth where the Greek god Zeus disguised as a swan seduces the princess Leda. Furthermore, classical literature conveys the myth of the swan song, a belief that swans would sing beautifully as a final gesture before death. With its closed beak, Billgren’s animal, just like the trumpeter swan, does not seem to be about to perform its last gesture quite yet. However, the background of the painting indicates the risk of hearing the swan song of nature in the future. Here, a tormented brown surface and a black geometric pattern give connotations to a swastika, the symbol of the Nazi movement. In the epicenter of their ideology, pseudo-scientific theories conveyed the idea of racial hierarchies and the notion of a master race that should dominate “the lower orders” of mankind. Unsurprisingly, the same hierarchical idea can be found in their relation to nature. Under the motto Blot und Boden (blood and soil), the soil (land) should be cultivated and exploited to protect and nurture the German blood (race). This thought has been shown to dominate the extensive exploitation of forests, marshlands and mountainous areas during their time in power – nature was to be brought to heel just like people perceived to be of lower racial standing. Their view of the relation between humans and nature can be said to exemplify a variation of the idea of anthropocentrism. According to this belief, human beings are put at the center of the universe and regarded as higher in standing than nature. Consequently, it is believed, that it is a human right to use nature at our disposal, such as using the trumpeter swan as a resource for decoration purposes without respect for its continued existence. Anthropocentrism is believed to be embedded in many modern societies and is often considered to be the root cause of the problems caused by humans in the biosphere. To challenge this idea, a line of thought called post-humanism proposes that there is no inherent human right to exploit nature, instead, human rights exist on a spectrum with animal rights and the rights of nature. In other words, humans must leave the view of being the center of the universe and enter a relationship with animals and nature based on equality. Perhaps is it only then, when we hear the swan song of anthropocentrism, that we avoid the risk of hearing the last melancholic chants of Billgren’s animal. Let us all hope it stays silent.

Ernst Billgren (b. 1957) is a Swedish painter, sculptor, author and graphic artist. Billgren studied at Konsthögskolan Valand in Gotheburg (1982-1987), and is a member of the Royal Academy of Fine Arts since 1997. Through his artistic practice, themes such as the notion of landscape painting, mythologies and national romanticism are investigated. Inspired by the tales of the Brothers Grimm, animals became important figures early on in Billgren’s work. Often dressed in clothing and positioned in furnished rooms they are, just like in the work Ledas svan, used to pose questions about the relation between culture and nature. Among others, Billgren is inspired by the artist Dick Bengtsson (1936-1989), known for his symbolically-saturated paintings. In Ledas svan, there are several possible connections to Bengtsson’s work such as the reference to the swastika which occurs in Bengtsson’s Hus med Hakkors och spade (House with swastikas and spade) from 1968, the treatment of the canvas creating a historicized patina, and the enigmatic imagery.

Ernst Billgren is represented at a wide range of institutions including the Gothenburg Museum of Art, Moderna Museet and Nationalmuseum in Stockholm.