Author talks, literary lectures and other activities in the Literary Agenda

During the first four years a number of authors and literary scholars were invited to visit the school as a part of SSE's Literary Agenda. We also did a city walk together with Afrosvenskarnas riksförbund after reading Homegoing by Yah Gyasi. 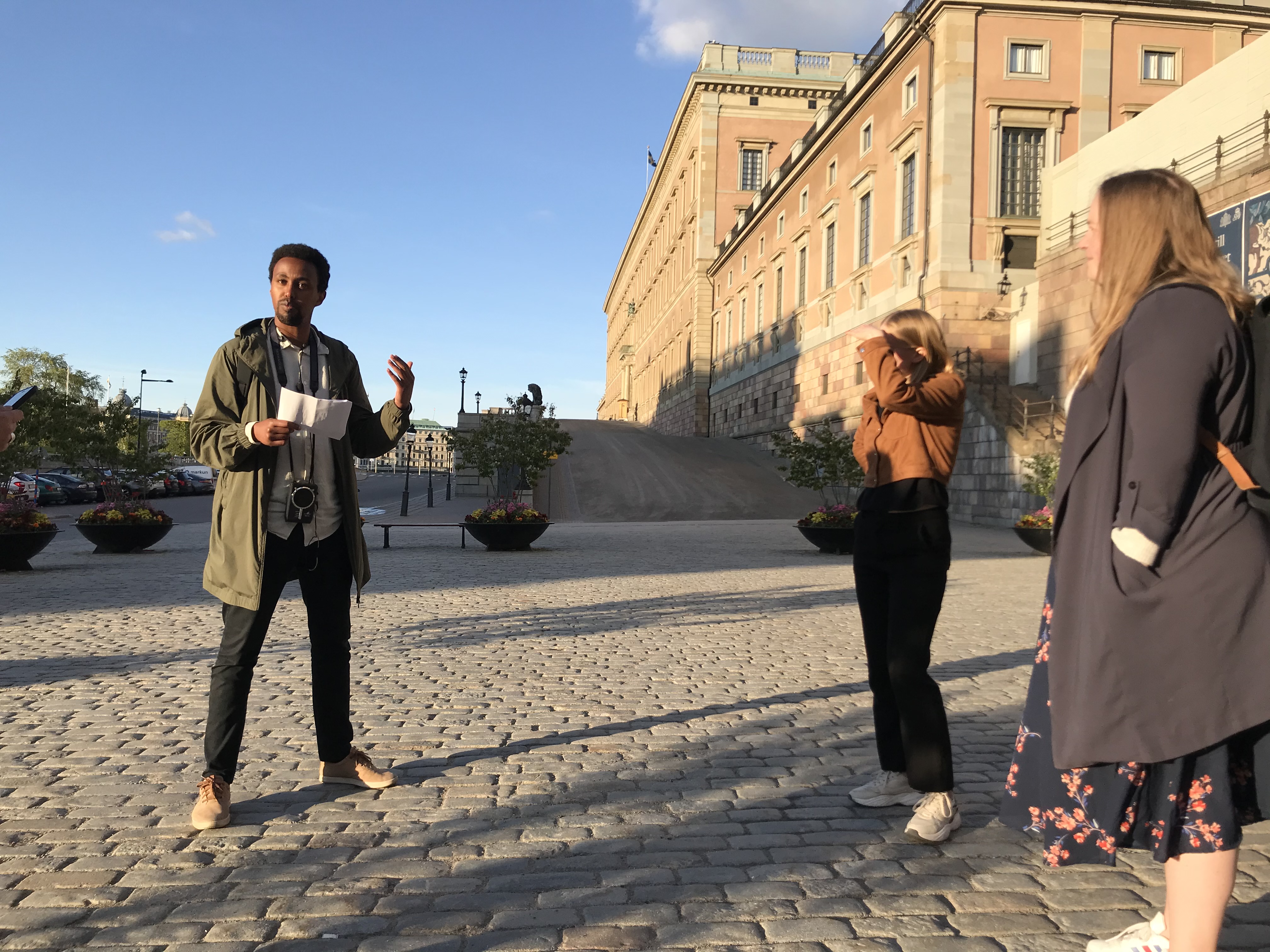 On May 20, 2021, students, faculty and staff went on a city walk to learn about the connections between slavery and today´s economy after having read Homegoing by Yaa Gyasi in the Literary Agenda. The city walk “In the footsteps of the slave trade” was made by The Afro Swedish National Society (Afrosvenskarnas riksförbund).

November 5, 2018, The author Theodor Kallifatides visited the school to talk about his book Another Life.

February 14, 2019, The author Johannes Anyuru was interviewed by Alan Shima on his book A Storm Blew In From Paradise.

March 26, 2019, Jennifer Clement, President of PEN International and an internationally acclaimed fiction author translated to more than 30 languages, had a conversation with Jesper Bengtsson, Chairman of Swedish PEN. This event was the first co-produced literary lecture with International Författarscen.

April 25, 2019, Susanna Romanus and Yukiko Duke had a literary talk together with Lovisa Fhager Havdelin, General Secretary of Teskedsorden. Teskedsorden is a not for profit organization that promotes human rights and democracy, and the literary talk discussed issues of how gender, ethnicity and sexual orientation are represented in literature.

May 28, 2019, Mircea Cărtărescu, acclaimed Romanian author and poet, talked about his literature with the Swedish author, translator and professor in aesthetics Aris Fioretos. This author’s talk on postmodernism in literature was arranged in collaboration with Internationell Författarscen and open to the public.

During the fall of 2019, SSE hosted talks with Ian McEwan and Viet Thanh Nguyen and also watched a live stream with Jamaica Kincaid. Colson Whitehead and Han Kang were to come, but had to cancel. All were in collaboration with Internationell Författarscen.

March 31, 2020, we did a digital workshop on how to write poetry with Anna Hallberg.

May 13, 2020, we did a live stream with Athena Farrokhzad on poetry and writing. Athena was interviewed by Literary Agenda´s Tinni Ernsjöö Rappe.

May 27, 2020, we did a live-streamed conversation - What is it like growing up black in an all white society - with hip-hop artist Jason Timbuktu Diakité and Lovisa Fhager Havdelin from Teskedsorden.

September 21, 2020, we did a lunch seminar on written meaning with Magnus Linton, author to Text & Stil.

October 6, 2020, we had invited Professor Martin Hägglund from Yale to tak about his book This life", but he unfortunately had to cancel due to sickness the same day.

May 20, 2021, students, faculty and staff in the Literary Agenda went on a city walk to learn about the connections between slavery and today´s economy, and how the heritage of slavery shapes the modern world. The city walk “In the footsteps of the slave trade” was made by The Afro Swedish National Society (Afrosvenskarnas riksförbund). We read Homegoing by Yaa Gyasi in the Literary Agenda early spring 2021.

October 15, 2021, the Swedish Minister for Culture and Democracy Amanda Lind visited SSE to learn more about the school´s educational mission FREE and the strategy to embedd art and literarure in the acedemic environment. She was met by (by others) SSE president Lars Strannegård and Edvin Lindhout, student representative for the Literary Agenda.

- The Crown Princess and Prince Daniel were very easy to talk to and it was fun to hear that they were legitimately curious to learn more about why we as individuals wanted to study at SSE, and where we see ourselves in 10 years. I was personally happy that they seemed to appreciate the art at our university! We also gave them a curated selection of my favourite books from the Literary Agenda, said Douglas Bengtsson.

March 16, 2022, we meet the Mexican writer Fernanda Melhor in the SSE auditorim to talk about her book Hurricane Season - a conversation led by student Douglas Bengtsson and Tinni Ernsjöö Rappe. 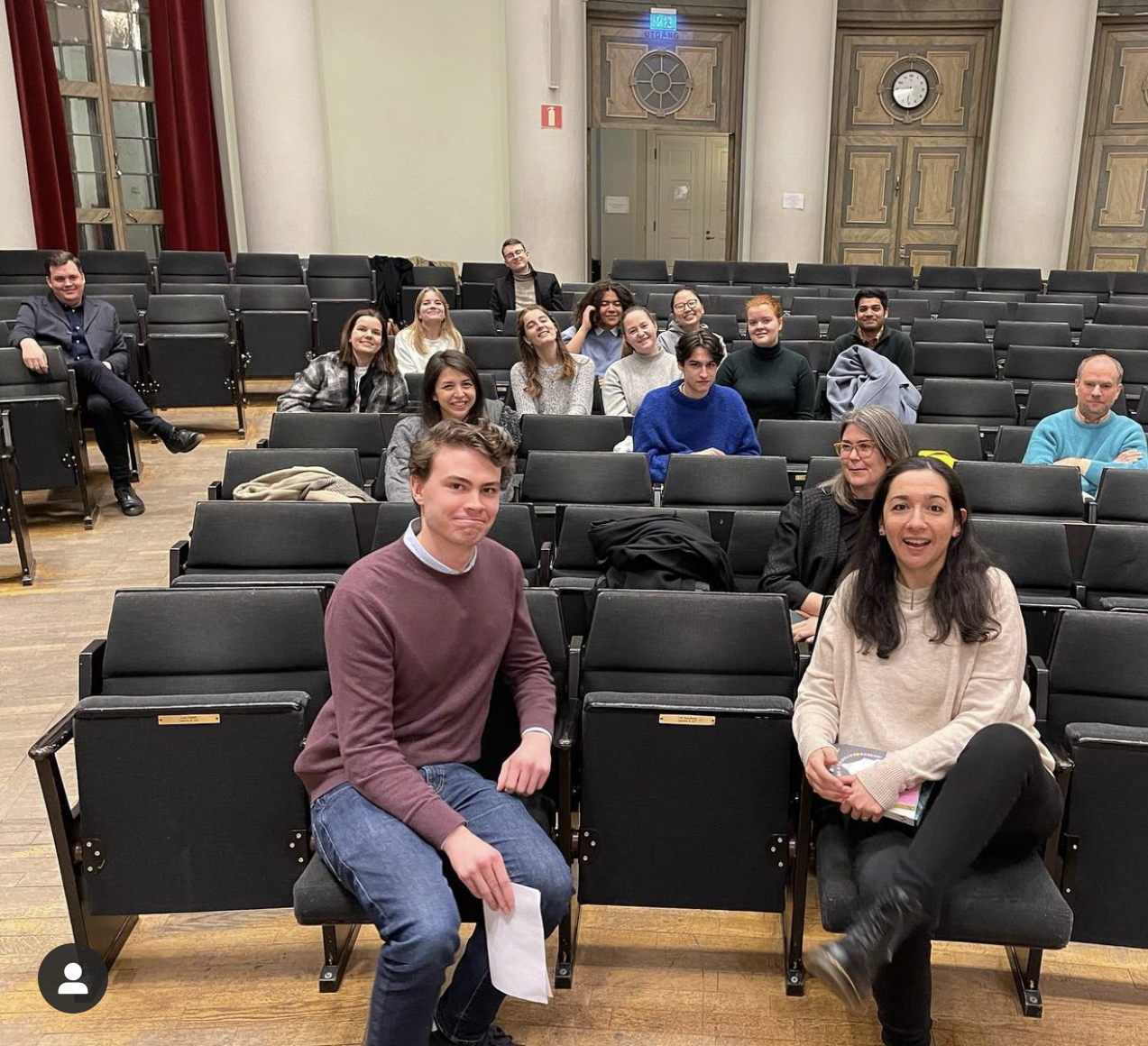 Back to Literary Agenda
Poetry workshop with Anna Hallberg in March 2020.