A Guide About the Life in Sweden

Are the Swedes as frosty as the climate? What makes a Swedish work place stand out from the rest of the world? And what can SSE offer you? 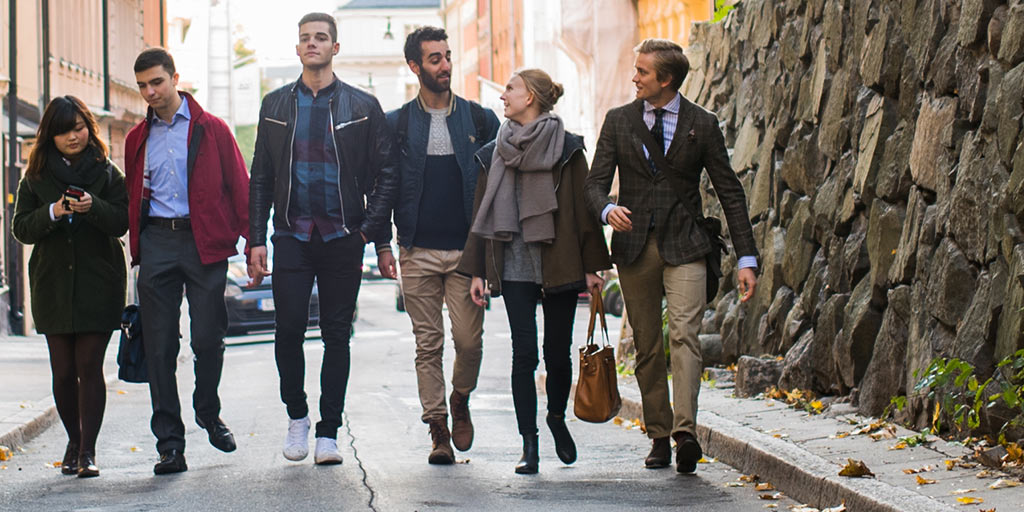 Let’s start with the basics

As a collective, Swedes aren’t too crazy about hierarchy. We don’t generally call our professors “sir” and we don’t say “miss” to our boss. We’re on first-name terms with almost anyone we address, except when it comes to actual royalty. We use first names with both friends and foes; with colleagues and superiors alike. The only area where we Swedes pull rank is within the military. The vigorous labor movement of the late 1800s made its mark on both Swedish politics and our attitude towards hierarchy. In short, we aren’t big fans of it. One should, of course, be careful not to generalize: The Swedish culture is as diverse as the country’s ten million inhabitants.

In Sweden diversity is a fact. And at SSE we believe it is a key to success. We are one of the best business schools in Europe, with an impressive track record when it comes to labor market success. Within three months of graduation, more than 90 percent of our students have jobs. We believe an open mind allows you to spot business opportunities no one else sees. Regardless of gender, ethnicity, age, religion, social background, sexual orientation or disability, everyone is welcome to study here. Diversity is the attire of success!

Certain aspects set Swedish work places apart from the rest of the world. There are, for example, few companies or organizations (if any) where you could be fired for criticizing your boss. In general, there are quite strong labor laws in place to protect employees. There seems to be a certain consensus that something could be gained from considering different points of view. According to most leadership studies, Swedes prefer their boss to be a more democratic kind of person. Many younger employees expect – even demand – transparency and require management teams to be good at communicating. Why do we know this? Because we know management.

And even though the digital era is transforming the labor market and its circumstances, the Swedish model, with its democratic approach, has paved way for its strong innovative vein. Alongside its more traditional mining and forestry industries, Sweden is known for its innovative and creative sectors. Ever heard about Spotify, IKEA, H&M…? And we’re not even going to get into the tech and IT areas. Read more about the different opportunities and directions you can aim for at the SSE.

At the SSE, we have very close ties to the business community, providing students opportunities to interact with companies and business leaders. We believe in combining theory with practice. Curious about how we do it? Check out the SSE Business Lab.

While some of our students decide to study abroad for one or two semesters, some others decide to pick additional courses at the Stockholm School of Entrepreneurship (SSES). SSES may be understood as a global network of silo-busters, system-thinkers and changemakers that work to question the taken for granted and strive towards a better future. From the cutting-edge of knowledge SSES provides free of charge courses, experiences and incubation for students and alumni of Stockholm’s top five universities: Karolinska Institutet (KI), the University College of Arts, Crafts and Design (Konstfack), the Royal Institute of Technology (KTH), the Stockholm School of Economics (SSE), and Stockholm University (SU).

Welcome to Stockholm – The Capital of Scandinavia

To study in Stockholm is to broaden your horizons in a metropolitan jewel – encrusted with beautiful archipelago islands, sweeping green parks and nature reserves, Stockholm is regarded by many to be one of Europe’s most beautiful capitals with its many bridges connecting the islands that make up the city center.

For those in pursuit of culture there is much to choose from: museums, theatre, the opera… many of which offer student discounts. And we haven’t even mentioned the music scene yet. If you consider the great musical exports such as Abba, Roxette, Robyn, Max Martin you can just imagine the melting pot of up and coming artists that Stockholm represents.

Want to know more about studying in Stockholm?

Clubs generally close earlier than in central Europe, often around 3 a.m. with just a few places that are open until 5 a.m. On the other hand, partying at the student corps is a completely different story. And, of course, there is more to student life than studying for exams and celebrating passing them. It is all about what you are passionate about. We should know. There has been quite a long line of passionate people who have passed through the SSE’s doors; Spotify board member Per-Jörgen Pärson, Magdalena Andersson, Swedish Minister of Finance and Sebastian Siemiatkowski, co-founder of Klarna are just a few of them. We have a wide global network of alumni who don’t mind dropping by to share their experiences with us.

By always entrusting us with the task of supplying a new generation of leaders and specialists, the business community has demonstrated unfailing support. Our business school is a school for the community.

The Swedish brand is often associate with the country’s beautiful outdoors. Perhaps you have seen Zlatan’s’ Volvo commercial that was shot in the snowy white wilderness? Sweden’s meandering land border stretches over 1,572 kilometers from north to south. This offers a diverse climate and, in the spring and summer, you can transition between snow in the northern mountain ranges to sun and sandy beaches in the south in just a matter of hours by rail or air.

There is a good deal of truth to the rumor that Swedes love nature. Maybe that’s because there is so much of it. We even put all of Sweden on Airbnb. This love is also represented in the Swedish corporate fauna. The nature theme can be found in all branches of business, not only when it comes to attracting tourists. We know how to think outside the box. Want to learn how to build a brand like Zlatan?

What about the Swedes – are they as frosty as the climate?

Well no. As we all know all stereotypes are just that - stereotypes. We might not be the chattiest of people, but we’re friendly and helpful – and we are very keen to practice our English. Almost all films are subtitled, so other languages play a central role in our consumption of pop culture. In general Swedes –particularly those in the major cities – have extremely well-developed feelers when it comes to detecting “what’s new”. That applies to most things: from clothes and design to food and drink. We are keen travelers and we aren’t afraid to be inspired by the rest of the world, picking out the best bits and incorporating them into our own lifestyle.

Because we are very open-minded, Sweden is a great nation in terms of innovation, particularly considering our relatively small population. Start-up rates are high and the strong industrial history provides a great labor market for business-oriented engineers. Most larger IT and technology employers are situated in or close to Stockholm. We cooperate with top schools all over the world and are a member of the prestigious CEMS networks. And, above all, we have a close relationship with your future employers and believe in getting your business feet wet early on. At the SSE, you can expect a close encounter with business reality with everything from guest lecturers, trainee programs and research networks. No wonder 47 percent of the board members of companies listed on OMX30 have a background at the SSE. In other words, we shape the leaders of tomorrow.

The SSE Employment Report, which is prepared every year, proves that studying at the SSE pays off. Of those graduating from SSE MSc programs in 2019, more than 90 percent had jobs within three months of graduation.

Want to know more about the different programs at SSE? Read more here!