No retreat, no surrender

Why did COVID-19 hit the automotive sector so hard, and can a similar situation in the future be avoided?

These factors coincide in a way that causes companies in the industry to be exposed to extremely high costs that must be managed. One way to manage costs is to work with continuous improvements and efficiency improvements. For example, it is accepted that efficiency needs to be improved by about 5 percent each year in order for companies not to diminish in profitability or competitiveness. Therefore, new methods are constantly being implemented to develop and produce in new and more efficient ways. The harsh climate has forced companies in the industry to constantly think anew and to constantly change proven models.

In addition to the automotive industry constantly striving for lean and continuous efficiency improvements, the players in the industry have specialized in relation to different technology levels. At the top of what can be described as an industry hierarchy is end-producing companies, i.e. those who produce the final product and who put their brand out to the customer. Then there is another category that is mentioned as system suppliers in that they develop significant technology areas that are included in the end products. In addition to these two levels, it is also common to speak of component suppliers represented by companies that develop and produce components at a lower level.

Companies that are at the top of the hierarchy, such as Scania and Volvo Trucks, account for a supply of around 10-15% of the components and systems and the value of the components. The rest comes from lower-level system and component suppliers in the hierarchy. It is not uncommon for companies such as Scania and Volvo to collaborate with around 5,000 external suppliers, who are represented throughout the globe in production as well as new and existing development projects. A major player in the industry needs a total of more than 600,000 components in production and aftermarket. Thus, managing and leading a company at the top of the automotive industry is partly about managing one's own business and, partly about being a player in a network where development and production take place across company boundaries in what can be compared to global production chains.

Sourcing economy of scale and scope of general and specific parts

Why has this industry ended up in a situation where vehicle manufacturers, who put their brands on the end products, cooperate so closely with external parties? One explanation is that the end products have such a broad technical content that no actor has sufficient knowledge or resources to supply all parts. If this (in theory) was still the case, the final product would quickly lose in performance like what once happened to Trabant from East Germany compared to e.g. Audi from West Germany. In addition, the volumes of the 600,000 different components would be too expensive to manage, develop and produce.

The fact that the industry, since the time of the Ford Model T, developed in a direction where the emphasis on parts come from suppliers, means that the suppliers have developed highly specialized capabilities and operate technology areas that vehicle manufacturers need for competitive reasons. However, it is also true that vehicle companies are, to a varying degree, self-sufficient in certain areas of parts that are considered business critical. Regardless, parts of the final products can be considered in relation to two categories: general and specific. General parts are supplied from many sources and from different suppliers. They are therefore under greater price pressure and one supplier is interchangeable with another. Specific parts reflect a more valuable and rare competence whereby the degree of interchangeability is low. Parts are thus supplied from players who can develop and produce general parts at the best price or of a specific nature with the highest technology content.

The automotive industry is global. This means that vehicle manufacturers as suppliers are located around the world. It is common for suppliers to choose a geographical location in close proximity to vehicle manufacturers in order to minimize inventory and to deliver Just-In-Time, or that parts are produced where it is absolutely cheapest and ships with deliver to locations with final assembly. The logistics that administers where parts are manufactured, and integrated into other systems and that are finally delivered to the manufacturing sites of vehicles is incredibly complex.

How is the automotive industry affected by a global shock like COVID-19 and what alternatives exist to avoid a similar disruptive situation in the future? The short answer is there are no alternatives to avoiding a similar situation in the future. We need to learn how to live with this type of risk and there are significant learning opportunities to be gained that will enable the industry to deal with similar situations in the future. This reasoning can be clarified in relation to a simple model and briefly explained in relation to four scenarios. The model: “The lack of foundations model” is based on two significant shortcomings: (a) lack of capital and (b) lack of parts. 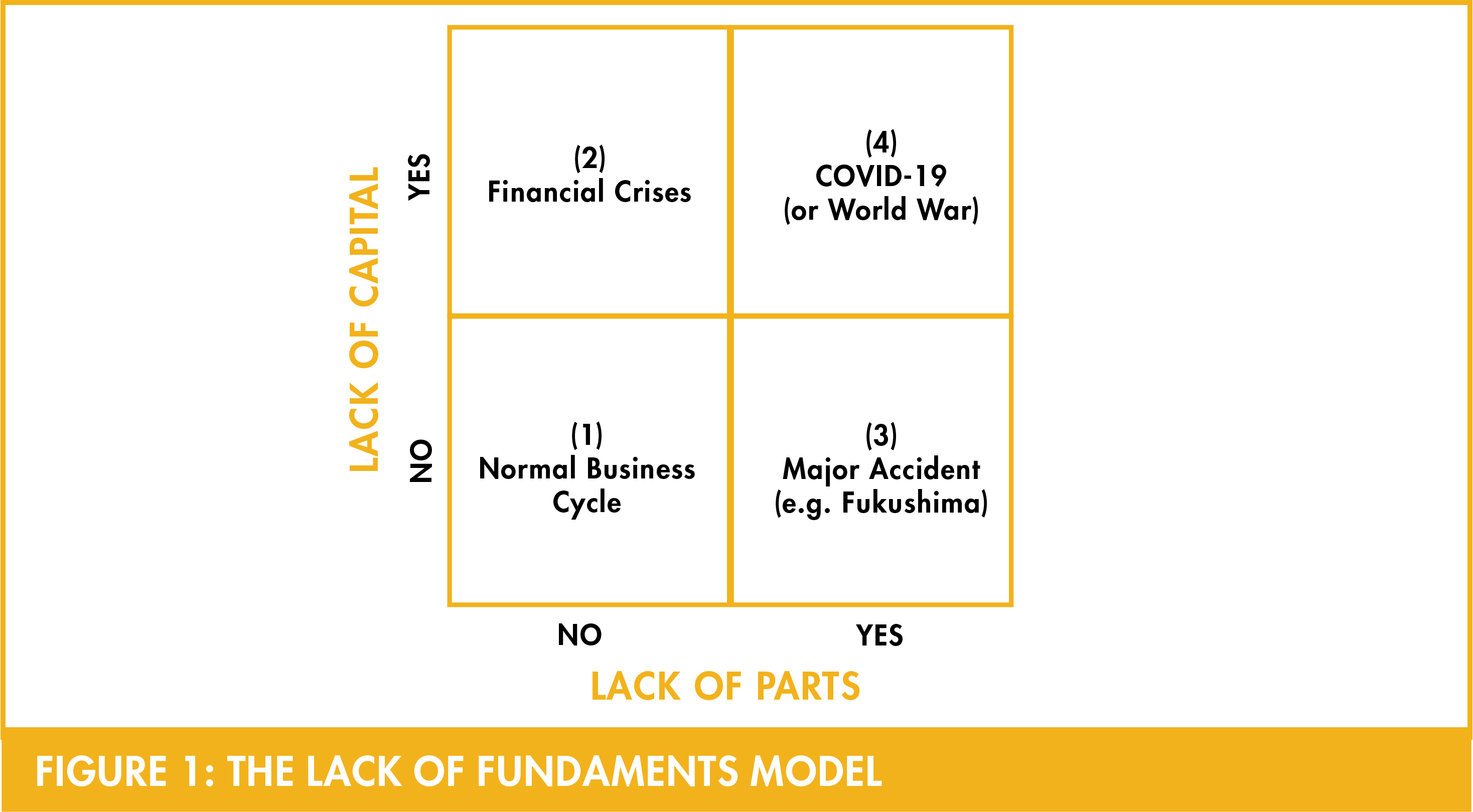 (1) A normal business cycle means that vehicle manufacturers commonly operate under very high competitive pressure, strict cost control, challenging development projects, changes in legislation and regulations, as well as business cycles, strikes and forecasts. These are major challenges in themselves, but remain in the "normal business" category since both capital and parts are available in the system.

(2) Financial crises are a sudden shortage of capital. This shortage is due to customers are unable to pay with credit as well as suppliers are unable to complete development projects because banks and financial institutions hold extra money. However, this scenario does not mean a lack of parts, neither specific nor general, because the challenge is financial rather than operational.

(3) A Major accident, such as the nuclear accident in Fukushima, challenges vehicle manufacturers in the lack of certain specific parts, for example rear cameras for cars and colour pigments for grey metallic colours. If the lack of car components applies to a specific part of a vehicle, these components can be retrofitted. The production process is thus only partially affected.

(4) COVID-19 (or a World War) means that there is a lack of financial as well as operational fundamentals. There is no money because the revenue suddenly ceases and the flow of parts and components end in companies as well as country after country that stops. A

sequential opening rate for these companies as countries, delay the start of the global production chain.

The main implication of this article is that the automotive industry itself has no realistic chance of avoiding a situation like the disruptive consequences of a COVID-19 pandemic in the future. However, measures can be taken to avoid the global spread of new viruses and to learn to live with and manage the risk of supply chain disruption by being better equipped for the future. Countries and, above all, unions (such as the EU) need common stop-and-restart policies to minimize the economic and operational impacts that would otherwise hit country after country in a sequence reminiscent of falling domino bricks.

Martin Sköld is Scania Associate Professor at the House of Innovation at Stockholm School of Economics.