Georg Nordmark has three artworks, all sculptures, in the Handels x Mejan 2022 exhibition: Kinetics of Fodder (2021) outside the main entrance of Sveavägen 65, Dumb Ball (Elephant Feeder) (2021) in the middle of the atrium and Strong box (Great Ape Feeder) (2021), in the corridor to the right after the entrance. 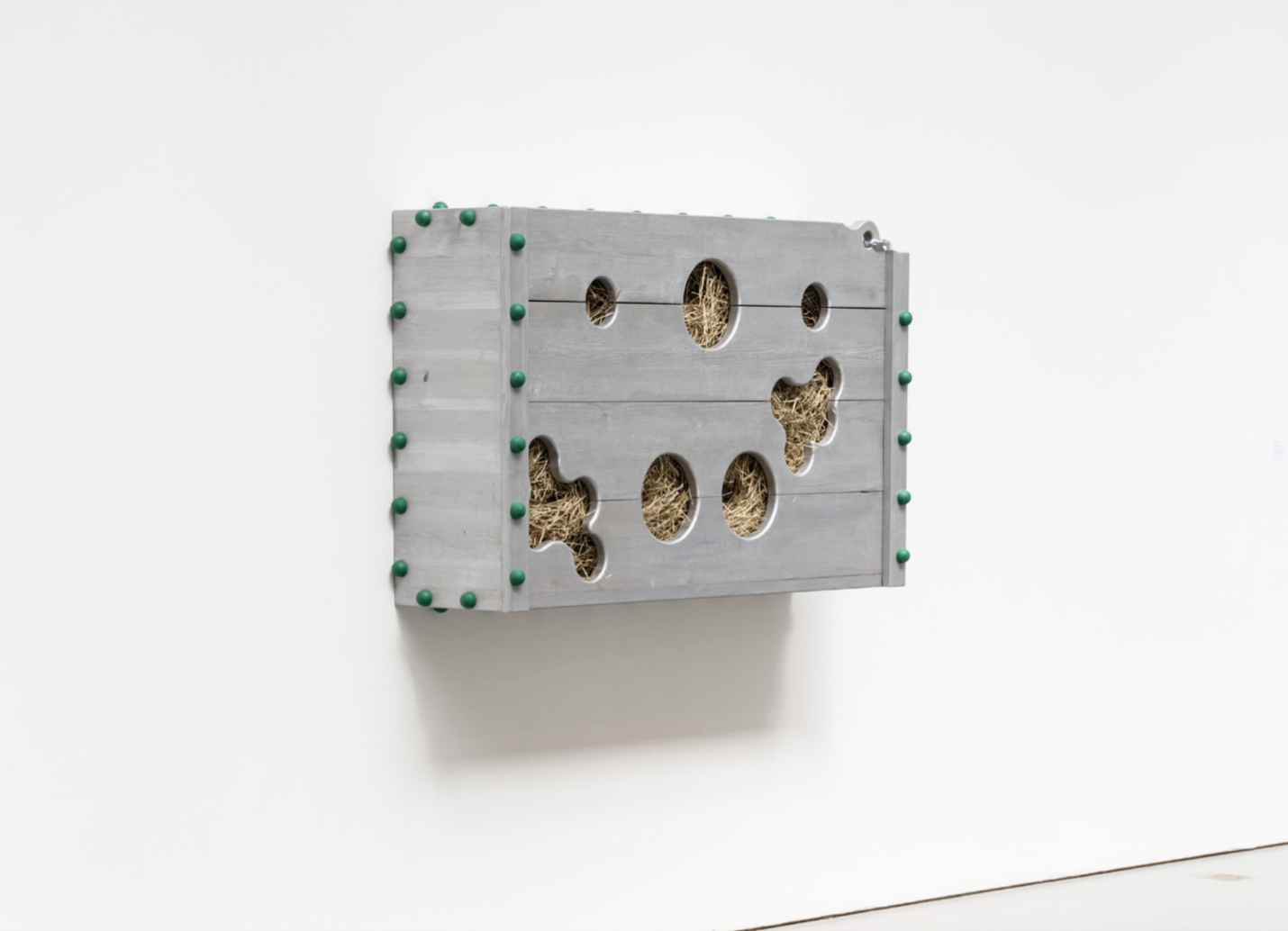 Georg Nordmark graduated from Royal Institute of Art Stockholm with a masters degree in fine arts in 2021. He was born in 1994 in Gothenburg, Sweden and he is now based in Berlin. Nordmark’s art practice stems from instruments and objects used in the handling of animals.

Kinetics of Fodder (2021) outside the main entrance of Sveavägen 65, is a paraphrase of Cady Noland’s sculpture Tower of Terror, reshaped with the referential context of animal studies that have come to characterise Georg´s artistic practice.
With the functional potential for both a delaying feeding devise by mean of hole sawed inconsistencies and the publicly shaming shackles of pillory holes, Georg wishes to suggest a critical approach to imprisonment, discipline and behaviourism that transgresses species barrier. The development of animal handling and human imprisonment are inextricably linked in their designs and authoritarian rationale.
The work operates in both the prisons exercise yard, the Zoo exhibit and the art space as an actor of enforced play and merciful punishment.

Dumb Ball (Elephant Feeder) (2021) in the middle of the atrium (pic far down on the page), is a perforated sheet metal octahedron, designed with elephantine proportions and capabilities in mind. The construction is originally intended as an enrichment and feeding device, as the edible content can fall out of the dispersed holesawed crevices when rolled, yet not roll all too easily, owing to its hedronic composition, making the food play suitably stagnant to fit the incessant finitudes of caged life. It rests between a Smithian minimalism, a Montessorian didactics and a behaviourist reductionism. The faces mirror the surrounding colours of the exhibition and tease an enclosed sugary surplus. 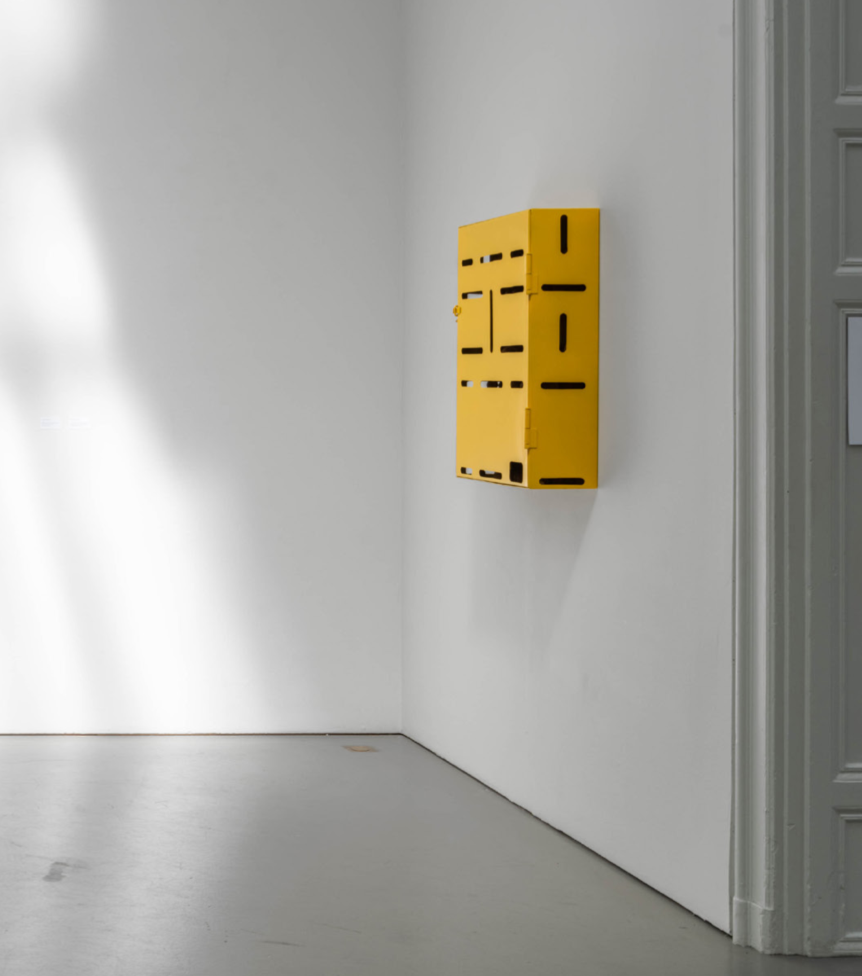 Strong box (Great Ape Feeder) (2021) (above), in the corridor to the right after the main entrance, is a sheet metal cabinet with perforated shelves and apertures, loaded with walnuts. The work appropriates foraging device designs used in zoos for larger primates, made in thick steel, structurally similar to a safety cabinet, to withstand the strength and curiosity of grate apes while testing their spatial intelligence.
Contradicting the function of a safe, the sculpture has a palpable interior, that permits access, with finger-sized apertures, for probing with digits and improvised tools. The sculpture thusly gains the structure of a labyrinth, where the filling could be trickled down to the lowest level and out through the sufficiently spacious exit. Laden with nutritious walnut, which fatty content supposedly improve brain functions, the kernel of which appropriately resembles previously mentioned organ, the mind game allures with an apparently edible outcome.
The sculpture is made to imply a form of safeguarded slow feeder, making readily available sustenance a motivator for trivial tasks. Here, food gathering is rendered a tedious coaxing of vailing steel-clad intentions.
The sculpture invokes notions of labour, cognition and possession.

“My works draw on the communicative properties of objects to concretise the relational pre-conditions of our ‘anthro-zoological’ present; its limitations and untold values. My visual language relies on the utilitarian anti-aesthetics of practical instruments, with recognisably functional shapes and proportions. Each work is intended to evoke movements, bites, claws and sniffs from animals which, transposed to an art context, create a distinct tactility and intentionality.  I examine the function and exceptionality of the art object – from elevated pieces of fine art to raw stimuli and curiosity.”