Policy brief: In recent years, press freedom in many Eastern European countries has increasingly come under threat. This policy brief provides an overview of the importance of a free press for democracy and the challenges to media freedom in these European transition economies.

Freedom of expression – which encompasses media freedom – is a fundamental human right enshrined in most countries’ constitutions. Yet for many of their citizens, it is more of an aspiration than a reality. Following the dissolution of the Soviet Union, a number of countries in Eastern Europe embarked on a process of democratisation and accession to the European Union – for which one of the prerequisites is a free press.

Figure 1 shows a measure of press freedom for the eight Eastern European countries that joined the EU in 2004. These countries saw a general improvement in press freedom from the early 1990s to the early 2000s. But since then, experiences have diverged and in 2017 only Estonia and the Czech Republic showed better scores on press freedom than when they first joined the EU. This pattern of backsliding is not confined to the media, but is also evident in other measures of democracy. 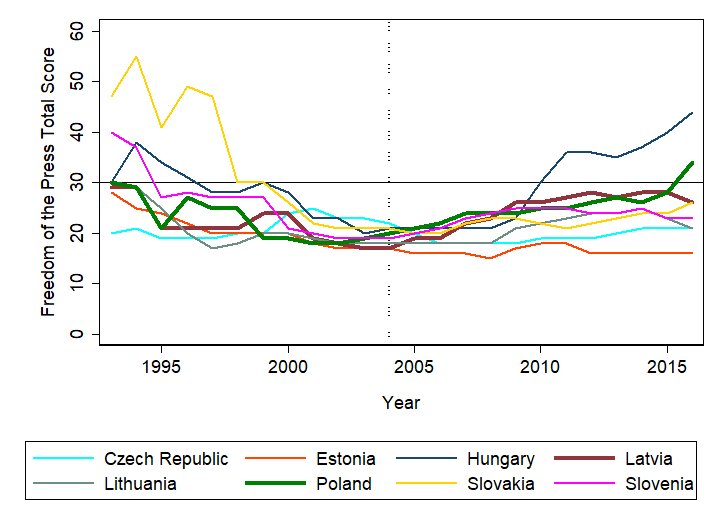 Source: Freedom of the Press, Freedom House. This figure shows the Freedom of the Press total score for the 8 central and eastern European countries that joined the EU in 2004 from 1993 to 2017. A country with a score between 0 and 30 (31 and 60) is designated as having a free (partly free) press.

A free press and a strong democracy are mutually reinforcing. Research, from mainly Western democracies, shows that the media plays an important role in informing the electorate and holding politicians accountable. For example, Snyder and Strömberg (2010) find that U.S. voters are less informed about their Congressmen when they are covered less in the local press. This is ultimately damaging for voters, as these politicians work less for their constituency and these constituencies also receive less federal funding.

Investigative journalism can play an important role in uncovering corruption and other forms of wrongdoing by politicians. For instance, using the Panama Papers and other leaked documents, journalists uncovered 11,562 offshore entities linked to Russia, 2943 linked to Latvia, and 103 linked to Sweden (see: Offshore Leaks Database). While there are legitimate uses for these offshore entities, the lack of transparency surrounding offshore finance also facilitates tax evasion and money laundering. The revelations of offshore holdings became an embarrassment to many politicians, with some forced to resign. In Russian media, the allegations that the leaks document suspected money laundering by President Putin were characterised as US propaganda (Hoskins and Shchelin, 2018).

Figure 2 shows the relationship between the length of time a country’s leader has been in office and its press freedom score in 2020. While there is no systematic relationship between leader tenure length and press freedom in Western Europe (in blue), across Eastern Europe (in red), countries whose leader has been in power for longer tend to have less media freedom. This correlation is likely to reflect three factors: 1) media coverage can affect a government’s chances of staying in power; 2) a longer-lived government might be more able to control the media and 3) a host of other factors, such as the public’s political engagement and the strength of democratic institutions, could influence both freedom of the press and the longevity of governments. 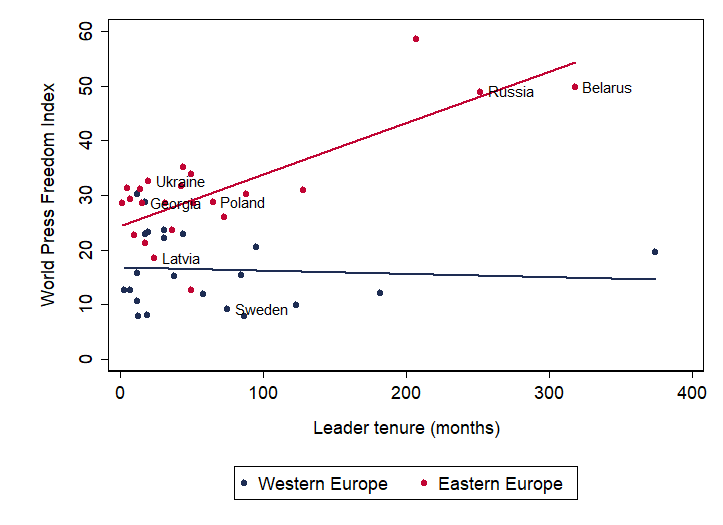 Source: Freedom of the Press, Freedom House. This figure shows the Freedom of the Press total score for the 8 central and eastern European countries that joined the EU in 2004 from 1993 to 2017. A country with a score between 0 and 30 (31 and 60) is designated as having a free (partly free) press.

Electoral Effects of the Media

A number of papers show the causal effects of (biased) media coverage in shaping support for political parties. For instance, watching Fox News increases voting for the Republican party in the US (DellaVigna and Kaplan, 2007; Martin and Yurukoglu, 2017).

Enikolopov, Petrova, and Zhuravskaya (2011) investigate the influence of NTV (the only national TV channel that was at the time independent of the government) on voting in the 1999 parliamentary election in Russia. They find that areas with greater access to NTV were significantly less likely to vote for the government party and more likely to vote for opposition parties.

Biased media can also be used as a foreign policy tool. Peisakhin and Rozenas (2018) find that Ukrainian areas that received Russian TV had on average greater support for pro-Russian parties and candidates in the 2014 elections.

The media landscape in many CEE countries is highly polarised and politicised. Kostadinova (2015) cites research showing that in some former communist countries many journalists still rely on government officials as news sources. In other countries, media in opposition to the communist regimes emerged at the end of the 1980s, such as in Poland where the Gazeta Wyborcza became one of the leading daily newspapers.

Government Control of the Media

Governments have many ways of controlling the media in their country. At the extreme, governments can own and run media outlets, dictate their contents, and censor any dissenting voices. While political and media systems across CEE are diverse, they share some common experiences that might explain their current fragility.

In the Eastern Bloc, the mass media was owned and tightly controlled by the state and used as a tool for propaganda. After the fall of communism, many state-owned media were privatised – along with other state-owned enterprises.  Foreign (mostly western European) media conglomerates purchased a significant fraction of media outlets in a number of countries.

While private and foreign ownership of the media can reduce the government’s ability to influence media content, the experience of CEE was not entirely positive.  Stetka (2012) argues that while foreign owners brought capital and technology, they were less concerned with transplanting Western journalistic and professional standards.  Dobek-Ostrowska (2015) claims that this focus on profit led to the tabloidisation of news across the CEE.

Following the global financial crisis in 2007/2008, foreign investors started to pull out of the CEE media markets and are being replaced by local owners who often have strong links with the government. This is evident in Hungary, where businessmen close to the government have been buying up independent media outlets, including its largest news website, one of two national commercial TV channels, and all regional newspapers (Bede, 2018). The Polish government also aims to “re-nationalise” its media. Plans by a state-run oil company to buy one of the country’s largest media publishers from its German owners were recently approved.

Elsewhere, domestically owned and previously independent media outlets are also being bought by new pro-government owners. In Russia, the formerly independent NTV from the above example was taken over by a state-owned company in 2001 and started to cover the ruling party in the run-up to the following elections in a similarly favourable way to state-controlled TV channels. Gehlbach (2010) argues that Putin’s media strategy is to exert tight control over the news coverage of these three main national television networks, while allowing media outlets with less reach to operate more independently.

In some countries of the region, there is limited information about the ultimate owner of media outlets. Within the EU, Latvia, Hungary, the Czech Republic, Slovakia and Cyprus, are assessed as high risk in terms of transparency of media ownership (Brogi et al. 2020). In 2009, the Swedish company Bonnier sold Diena – one of Latvia’s largest newspapers – to an initially undisclosed investor. A year later, a Latvian businessman acquired a controlling stake in the paper.

Around the world, traditional news media is facing increased competition from digital platforms and becoming highly dependent on advertising revenue, including advertising from the government and pro-government businesses According to the Centre for Media Pluralism and Media Freedom, there are no clear and fair criteria for the distribution of state advertising to the media in the majority of EU countries – especially those in Eastern Europe (with the exception of Estonia).

Szeidl and Szucs (2021) document how the Hungarian government targeted advertising to friendly media outlets and how these media in turn covered the government more positively.  They also present suggestive evidence that a similar favour exchange between government and the media occurs in nine other Eastern European countries, including Poland.

Two weeks ago, many private Polish media outlets coordinated a media blackout to protest government plans to tax advertising revenues. The media companies complained that the tax would cost them $270m a year, while public media received twice as much from taxpayers.

Governments can also ensure positive coverage by intimidating editors and journalists. Since 1992, 91 journalists were killed, imprisoned, or went missing in Russia, 18 in Ukraine, 15 in Belarus, and 8 in Georgia (data by the Committee to Protect Journalists). While not all of these cases reflect government action, several recent examples illustrate how the judicial system may be used against journalists. For instance, according to the CPJ, ten journalists were imprisoned in November 2020 for covering protests against President Lukashenko in Belarus and one journalist was charged with high treason and espionage in Russia in July 2020.

There are also fears that governments can use defamation laws to deter and punish unwelcome media reports. For instance, the head of Poland’s ruling party filed a libel charge against two journalists from the Gazeta Wyborcza for reporting about his alleged involvement in a real estate project (see, e.g. Council of Europe media freedom alert).

The media plays a vital role in shaping the public debate and holding those in power accountable to the wider population. This power of the media also increases the risk that governments attempt to influence media content.

In recent years, many countries in CEE have seen press freedom come increasingly under threat, undermining some of the progress made since the dissolution of the Soviet Union. Part of the present fragility of media freedom in Eastern Europe may be due to their historical experience. During the transition from communism, many formerly state-owned media companies were sold to private and often foreign owners. In the past decade, local business interests with strong ties to the government started to buy up large shares of the media market in a number of Eastern European countries. Meanwhile, public service media have been less successful at establishing themselves as important and unbiased sources of information across Eastern Europe compared to Western Europe.  To ensure positive media coverage, many governments adopt a carrot and stick approach: state advertising revenues and intimidation of individual journalists.

Article 19 of the Universal Declaration of Human Rights states that “everyone has the right to freedom of opinion and expression; this right includes freedom to hold opinions without interference and to seek, receive and impart information and ideas through any media and regardless of frontiers”. To ensure these fundamental rights, there need to be transparent and fair rules governing the ownership, management, and financing of media outlets and safeguards for individual journalists.

Disclaimer: Opinions expressed in policy briefs and other publications are those of the authors; they do not necessarily reflect those of SITE, the FREE Network and its research institutes.

Does the Russian stock market care about Navalny?