Green concerns and salience of environmental issues in Eastern Europe

Policy brief: Changes in individual behavior are an essential component of the planet’s effort to reduce carbon emissions. But such changes would not be possible without individuals acknowledging the threat of anthropogenic climate change. This brief discusses the climate change risk perceptions across Europe.

People in Eastern Europe are, on average, less concerned about climate change than those in Western Europe. Using detailed survey data, we find evidence that the personal experience of extreme weather events is a key driver of green concern, and even more so in the non-EU Eastern part of Europe. We argue that this association might be explained by the relatively low quality and informativeness of public messages concerning global warming in this part of Europe. If information is scarce or perceived as biased, personal experience will resonate more.

Climate change is one of the main threats to humanity. Tackling it entails a combined effort from all parts of society, from regulatory changes and industries adopting new greener business models to consumers adjusting their behavior. While an individual’s contribution to climate change may appear insignificant, research shows that the aggregate effect of mobilizing already known changes in consumer behavior may allow the European Union (EU) to reduce its carbon footprint by about 25% (Moran et al., 2020).

However, the first step for people to adjust their consumption patterns is to acknowledge the threat of anthropogenic climate change. Public ignorance about climate change’s impacts remains high across the world. Furthermore, citizens of more polluting countries are often relatively less concerned about climate change. This lack of awareness is not well-understood, in part due to the multi-dimensional local factors affecting it (Farrell et al., 2019).

This brief discusses the potential drivers of climate risk perceptions, focusing on the differences between Western Europe, Eastern European states that are part of the EU, and non-EU Eastern European countries. We first present the climate change concerns across these regions. We then discuss to which extent the country’s pollution exposure measures and individuals’ socio-economic characteristics can explain these differences. We show that the personal experience of extreme weather events is a key driver of green concern, and even more so in the non-EU part of Eastern Europe. We relate this result to the relatively low salience and informativeness of public messages concerning climate in this part of Europe and discuss potential policy implications.

Figure 1 compares, across Europe, the share of poll respondents who see climate change as a major threat, based on the data from the Lloyd’s Register Foundation World Risk Poll 2020.  While there is a significant variation in climate risk perception within each region, respondents in Eastern Europe are, on average, less concerned about climate change than those in Western Europe. We observe a similar pattern between the EU and non-EU parts of Eastern Europe.

Exposure to pollution does not seem to clearly explain these differences. Moreover, the patterns of correlation between climate concern and pollution differ across regions and measures of pollution exposure. The left panel of Figure 2 presents averages across the regions for two pollution measures: carbon emissions (which is, perhaps, reflecting climate threat in general) and air quality (which is more directly associated with health risks). We can see that CO2 emissions are the highest in the non-EU part of Eastern Europe, the least environmentally concerned region. Still, the EU part of Eastern Europe has the lowest average emissions per capita across the three regions (this ranking likely results from the interaction between reliance on fossil fuels, industrial structure, and level of development across the three regions). At the same time, when it comes to the average air quality (measured as the percentage of population exposed to at least 10 micrograms of PM2.5/m3), the non-EU EasternEuropean region is doing better than its EU counterpart, which is more climate concerned. Here, better average air quality in the non-EU Eastern European region is due to its relatively low population density, and consequently, low PM2.5 exposure in large parts of Russia. (See, more on the air quality gap within the EU in Lehne, 2021).

Source: Authors’ calculations based on Lloyd’s Register Foundation World Risk Poll 2020, question 5 “Do you think that climate change is a very serious threat, a somewhat serious threat, or not a threat at all to the people in this country in the next 20 years?”. Averages are calculated with population-representative weights.

The right panel of Figure 2 shows correlations between (country-level) climate concerns and pollution. For CO2, the correlation is negative in all three regions, suggesting that, within each region, more emitting countries are less concerned. This negative correlation, however, is the strongest in the EU-part of Eastern Europe and almost absent in the non-EU part. The differences between the regions are even more striking for the correlation between climate concerns and air quality: both in Western Europe and in the EU part of Eastern Europe, citizens of countries with worse air quality are more concerned about climate change. However, in non-EU Eastern Europe, the relation is the exact opposite: lower concerns about climate change go hand-in-hand with worse quality of air.

Lower climate concerns in EU-part of the Eastern bloc have been documented before; they are often explained by the Eastern-European economies’ high reliance on coal and other fossil fuels, low-income levels, and other immediate problems that lower the priority of climate issues (e.g., Lorenzoni and Pidgeon 2006, Poortinga et al., 2018, or Marquart-Pyatt et al., 2019). Additionally, the literature suggests that climate beliefs are linked to individuals’ socio-economic characteristics, such as level of education, income, or gender (see, e.g., Poortinga, 2019), which may be different across the regions.

However, the regional differences in climate beliefs also persist when we use individual-level data and control for respondents’ individual characteristics, as well as for country-level variables, such as GDP per capita, oil, gas, and coal dependence of the economies, and exposure to emissions (at the country level, as our individual data does not have this information). This is illustrated in Column 1 of Table 1.

Source: This is an outcome of logistic regression. Experience =1 if the respondent answered “yes” to the World Risk Poll 2020 question L8D “Have you or someone you personally know, experienced serious harm from severe weather events, such as floods or violent storms in the past TWO years?” Media Freedom is based on 2018 Freedom House data, and scores media between 0 (worst) and 4 (best). Controls include age, gender, education, personal feelings about household income, income quantile, urban/rural, size of household, number of children under 15, las well as log of GDP per capita, log of CO2 per capita, mean exposure to PM2.5, and oil, gas and coal rents as a share of GDP. Robust standard errors in parentheses. *** p<0.01, ** p<0.05, * p<0.1

In what follows, we explore another key driver, the personal experience of extreme weather events. While there is a sizable literature on the effect of experience on climate beliefs, that factor was never, to our knowledge, considered to understand the difference in climate risk perception between the EU- and non-EU parts of Eastern Europe.

In line with the recent climate risk perceptions literature (e.g., Van der Linden, 2015), we show that personal experience increases the likelihood of considering climate change as a major threat across all three regions (see column 2 in Table 1). The association is stronger in the EU part of Eastern Europe and even more so in the non-EU part (even if the difference between the last two is not statistically significant). This finding is confirmed when we control for (observable and unobservable) country-specific effects, such as social norms, via the inclusion of country-level fixed effects. In this case, extreme weather events make respondents more climate-conscious within each country (Column 3 of Table 1). In this specification, the effect differs statistically between the two groups of Eastern-European countries, even if only at a 10% significance level. To put it differently, the impact of personal experience with extreme weather events seems to close a sizable part of the gap in climate risk perceptions across the regions and more so in the non-EU part of Eastern Europe.

Our preferred explanation for this finding is that personal experience resonates with the quality and informativeness of public messages concerning global warming. If information is scarce or perceived as biased, personal experience will resonate more. The low political salience of environmental issues in Eastern Europe, inherited from its Soviet past (McCright, 2015), and lower media quality in Eastern Europe (see e.g., Zuang, 2021) are likely to affect the quality of public discourse concerning the risks of climate change, and, consequently, the information available to individuals. 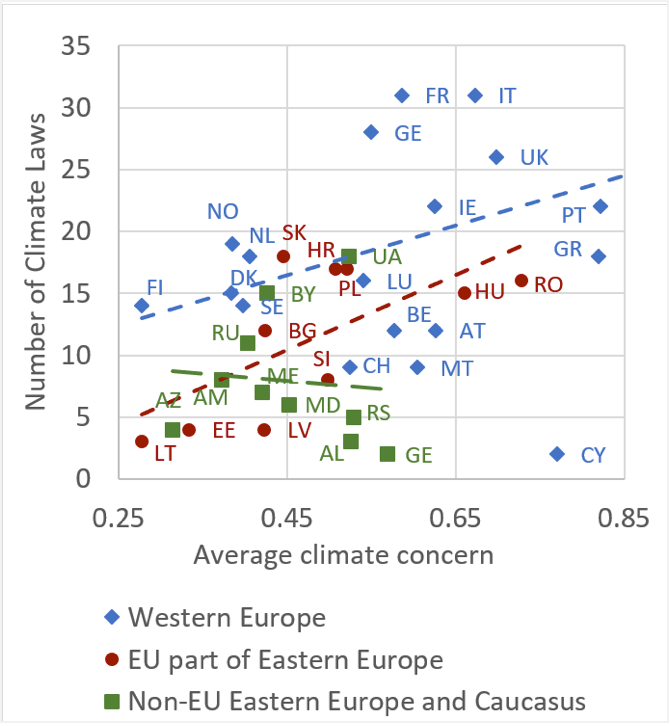 Source: Authors’ calculations based on climate legislation data from Grantham Research Institute on Climate Change and the Environment, and World Risk Poll 2020

Regarding the influence of media quality, column (4) of Table 1 shows that the effect of personal experience on climate change concern is negatively correlated with media freedom. One interpretation could be that individuals in countries with freer media infer less from their extreme weather experience because more accurate media coverage about climate risks improves the population’s knowledge on the issue.

Of course, the causality of the climate belief-experience relationship could also go in the other direction – people who are more concerned about climate change could be more likely to interpret their personal experience as weather-related extreme events. It is impossible to distinguish with the data at hand. However, Myers et al. (2013) show that both channels are present in the US, and the former channel dominates for the people less engaged in the climate issue. Stretching this finding to the Eastern Europe case, we argue that more precise information on the importance of climate change may partially have the same effect as experience – i.e., it will increase people’s awareness and concern about the consequences of global warming.

This brief addresses the differences in climate change beliefs between Eastern and Western Europe, as well as within Eastern Europe. It discusses the determinants of these differences and stresses the importance of personal experience, especially in the non-EU part of Eastern Europe. It relates this finding to the relatively low accuracy of information and quality of public discourse about climate change in the region.

We know already that tackling climate change requires reliable and accurate sources of information. This is especially crucial given what we outline in this brief. This issue resonates with the current social science analysis of the diffusion of climate change denial (see e.g., Farell et al., 2019, on the significant organized effort in spreading misinformation about climate change). Such contrarian information that relays uncertainty and doubt regarding the severity of the global climate change threat could have a severe impact, especially in situations with low political salience of climate change, like in non-EU Eastern Europe. A significant effort of both governments and civil society is needed to provide adequate information and mobilize the population in our common fight against climate change.

Who benefitted from the gasoline tax cut in Sweden?