From east to west: A paper curtain in Swedish foreign news coverage?

How much a country is talked about in the media can determine its place in the public debate. In this brief, SITE researchers Maiting Zhuang and Svante Strömberg study the amount of news coverage devoted to European countries in the Swedish press. They document a systematic difference between Western and Eastern Europe and explore underlying factors that could be important in explaining this East-West divide.

The media plays a vital role in modern societies by keeping the public informed and policymakers accountable. Whether and how events are covered by the news determines their relevance in the public debate. There is ample empirical evidence on the agenda-setting power of the news media. For example, Snyder and Strömberg (2010) show that local press coverage affects how informed US voters are about their representatives and in turn how much their politicians work in the interest of their constituencies. Eisensee and Strömberg (2007) find that news coverage affects how much disaster relief the US sends to foreign countries.

We choose the four most widely read Swedish newspapers (Aftonbladet, Expressen, Dagens Nyheter, and Svenska Dagbladet) and use the newspaper database Retriever Research Media Archive to obtain statistics on the number of mentions of each country between 1995 and 2021. A country mention is an article in which the name of a country appears. Since two or more countries can be named in the same article, the total number of mentions does not correspond to the number of articles. As a percentage of all articles published by the four newspapers in 2021, roughly 20% mention at least one of these countries. While this simple measure of news coverage can be informative, it does not take into account many other aspects of a country’s prominence in the news, such as the length of articles, where articles appear, the tone of coverage, etc.

While there does not appear to be a trend in relative coverage, there is considerable variation from year to year. The year when the relative difference in the number of mentions is smallest is 2014. The two most mentioned Eastern European countries in that year were Russia and Ukraine. Coverage likely increased due to the Crimean Crisis, when Russia invaded and annexed the Crimean Peninsula in Southern Ukraine. The relative difference was also low in 2008, coinciding with the Russo-Georgian war in August. In that year, other newsworthy events, such as the Global Financial Crisis or the UEFA European Football Championship, have a more ambiguous effect on relative media coverage. 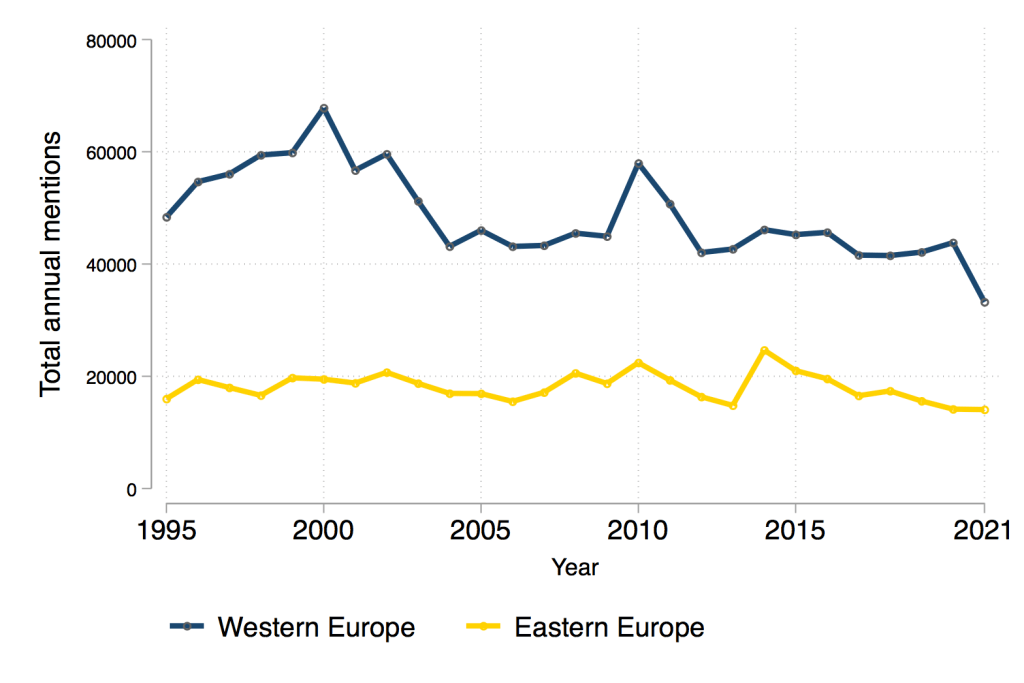 What Explains This Discrepancy Between East and West?

There are a number of potential reasons why some countries systematically receive more attention in the press. In this section, we correlate the mean annual mentions of each country between 2019 and 2021 with different aspects of that country’s relationship with Sweden.

Figure 2 shows how news coverage of a country depends on its geographic distance to Sweden and its population size. Overall, the further a country is from Sweden, the less that country is covered in the Swedish press. On average, Eastern European countries (in yellow) are covered less than Western European countries (in blue), for a given distance to Sweden. For example, Poland and Germany are both around 1000km away from Sweden, but Germany is mentioned almost twice as often in the Swedish press. As we measure the distance between the most populous city of each country and Stockholm, some of this difference in coverage is driven by the fact that countries sharing a border with Sweden receive extensive coverage. For instance, Denmark, Finland, and Norway are on average covered more than six times as much as Latvia.

Population also plays a role, that is, larger countries (e.g., Germany, Russia, Spain, and Poland) receive more coverage than smaller countries (e.g., Lithuania, Ireland, and Estonia). As Eastern European countries have on average smaller populations than Western European countries, population can partly explain the East-West difference in news coverage. One counterexample is Russia, which has more than twice as many people as France or the UK, but receives less coverage in the Swedish press. 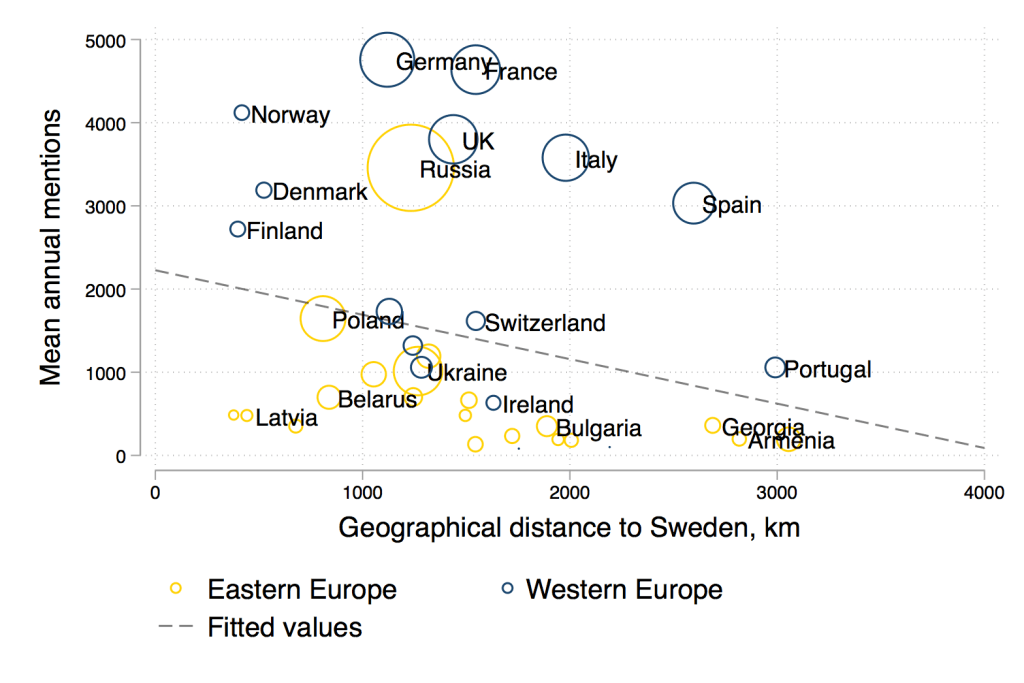 Note: Geodesic distances are calculated between the latitudes and longitudes of the most populous city of each country and Stockholm. Marker sizes are weighted by population averaged over 2019-2021, and fitted line is unweighted. Source: CEPII’s GeoDist dataset (Mayer and Zignago, 2006) and the World Bank. See Figure 1 for a list of countries included.

Figure 3 shows that Sweden’s economic relationship with a country affects how much the country features in Swedish news. We find a strong positive correlation of 0.8 between a country’s total trade volume with Sweden and country mentions in Swedish newspapers. As Sweden’s largest trading partners tend to be in Western Europe, this partly explains the relative coverage of East and West. Another factor is the overall size of a country’s economy (as measured by its GDP). Swedish newspapers more commonly mention countries with higher GDP, and these are more likely to be in Western than Eastern Europe. 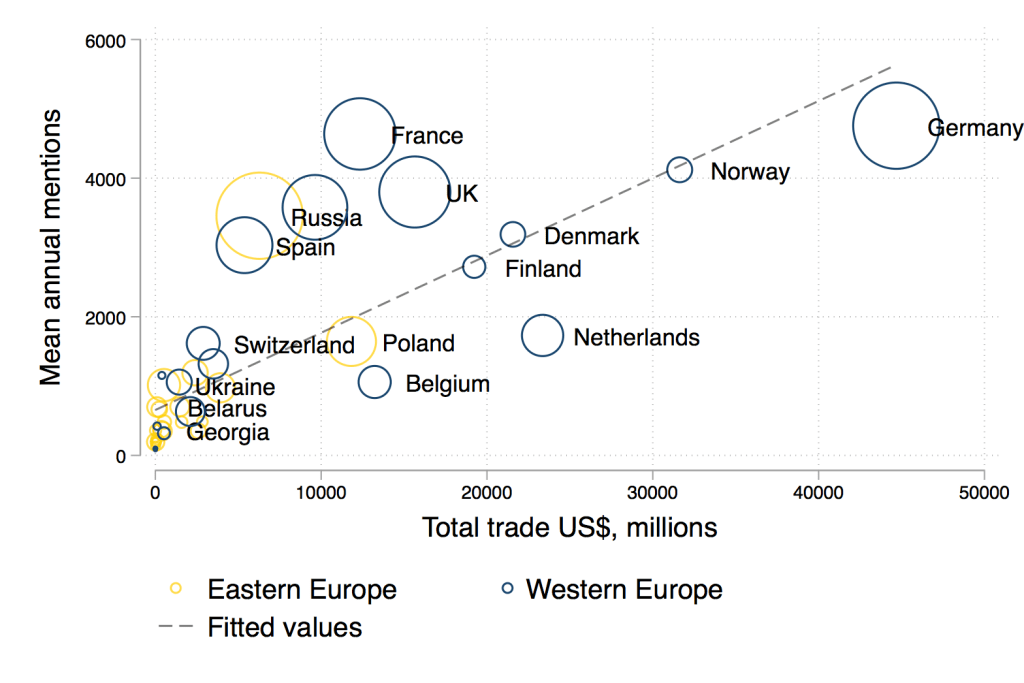 Note: Trade data are from 2019. Marker sizes are weighted by national GDP, and fitted line is unweighted. GDP figures are averaged over 2019-2021 and measured in current prices, PPP adjusted, international dollars. Source: The World Bank’s WITS database and the IMF World Economic Outlook, October 2021. See Figure 1 for a list of included countries.

There is a large literature documenting the link between cultural factors and the economic relationship between nations. For instance, studies show that similarities in ancestry, language, religion, norms and values can influence bilateral trade (Melitz, 2008; Guiso et al., 2009) and the diffusion of technology (Spolaore et al., 2009). In this section, we show how the amount of press coverage correlates with differences in language, religion, and values and norms using cultural distance data from Spolaore and Wacziarg (2016).

Figure 4.a shows that Swedish newspapers are more prone to cover countries whose languages are similar to Swedish. The language similarity measure originally developed by Fearon (2003) is based on the prevalence of languages within a country and distance between languages. The distance measure is calculated using linguistic trees provided in Ethnologue. It ranges from 0 (close) to 1 (distant) and reflects the expected number of common linguistic nodes between two randomly chosen individuals from each country and takes into account that countries can be linguistically heterogeneous (for more details, see Fearon 2003). Norway and Denmark are linguistically closest to Sweden, however, these are also two neighboring countries with which Sweden conducts extensive trade. On average, Eastern European countries are more linguistically distant from Sweden, although some Western European countries (such as France and Spain) are as linguistically distant from Sweden as many of the Eastern European countries and receive considerably more press coverage.

Figure 4.c shows an index of a country’s cultural proximity to Sweden, that is, its distance in terms of cultural values, attitudes and norms based on average responses to the World Value Surveys from 1981 to 2010 (see Spolaore and Wacziarg, 2016). This cultural proximity index aggregates the Euclidian distances in survey responses between each country and Sweden. The index is standardized so that 0 shows the average country’s cultural distance to Sweden and negative (positive) values indicate above (below) average cultural similarity. Western European countries are significantly closer to Sweden than Eastern European countries based on this measure. As Swedish press coverage is on average declining in a country’s cultural distance to Sweden, this difference in country’s values and attitudes can explain some of the East-West difference in media coverage. 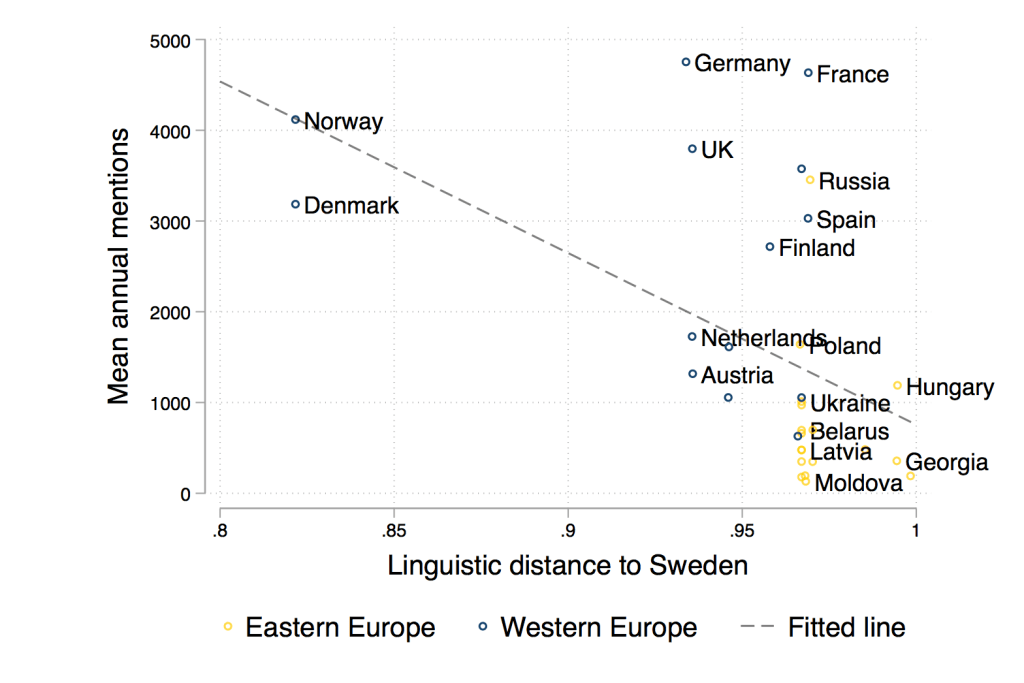 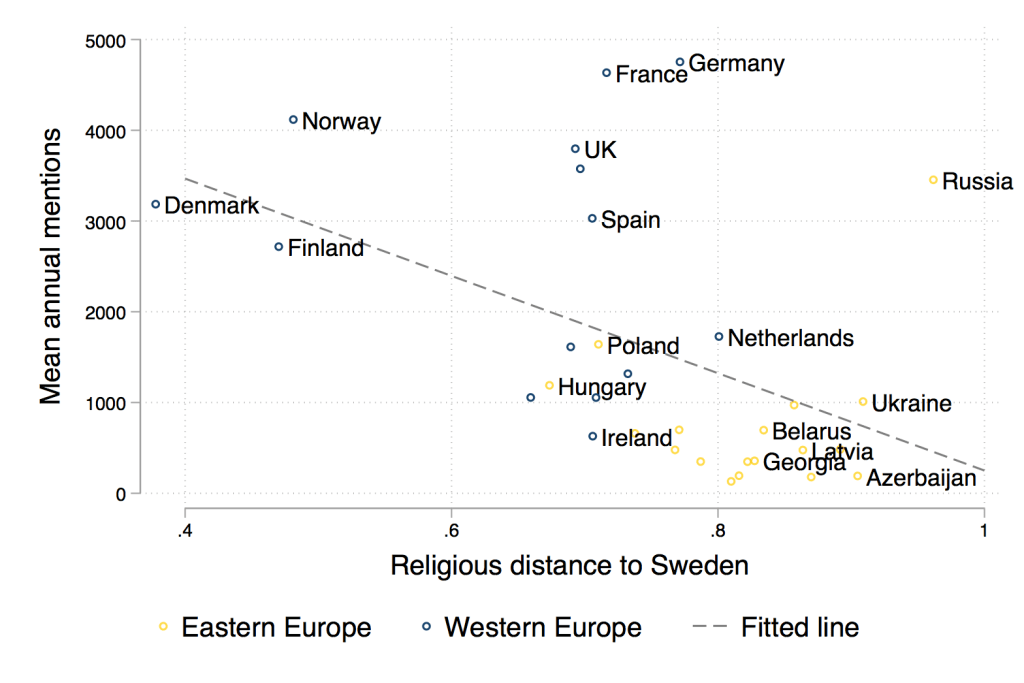 Note: We use the tree-based weighted religious distance from Spolaore and Wacziarg (2016). This measure is an estimate of the expected distance between the religions of two randomly chosen individuals from each country. See Figure 4.a for a list of included countries. 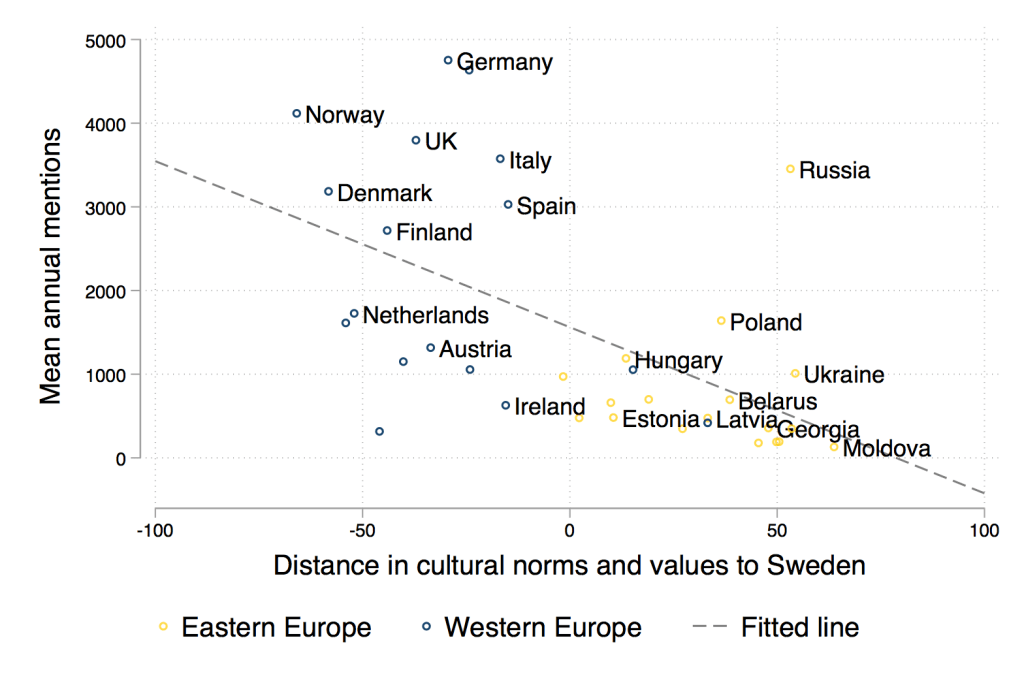 Note: We use the distance in cultural norms and values from Spolaore and Wacziarg (2016).  This measure is based on all value-related questions from the World Values Survey Integrated Questionnaire from 1981–2010. The mean distance across countries is standardized to zero. See Figure 4.a for a list of countries included.

As the public and policymakers primarily receive information from the mass media, news coverage can have profound effects on public debate and policy decisions. Using data on the content of the four most widely read Swedish newspapers over the past decades, we measure how much the Swedish press covers Eastern and Western European countries. We find that over the past 25 years, there have been 2.7 times more mentions of Western than Eastern European countries. We find that the Swedish press is more likely to mention countries that are geographically closer, more populous, have a larger GDP and more trade with Sweden. Cultural proximity (as measured by language, religion and values, attitudes and social norms) also correlates with higher coverage. These factors are of course not independent from each other. For instance, the other Scandinavian countries with whom Sweden shares a border and a history, are culturally similar to Sweden and some of Sweden’s most important trading partners. They are also some of the countries that are most covered by the Swedish press. Some of these factors, such as sharing similar values, appear to explain the gap in coverage between East and West, while others, such as geographic distance, do not. More recently, concerns over energy security in the EU (see e.g., Le Coq and Paltseva, 2022) and the rise in military tension between Russia and Ukraine illustrate how developments in Eastern Europe can directly affect life here in Sweden. Perhaps it is time for Sweden to pay more attention to her eastern neighbours?