On December 16-17, 2019, the Stockholm Institute of Transition Economics hosted the annual Academic Conference at the Stockholm School of Economics that brought together researchers and scholars in economics and political science from all over Europe and North America contributing to a better understanding of the political economy of Eastern Europe.

The conference “The Political Economics of Long run Development in Eastern Europe” featured research presentations, and three keynote speakers - Ruben Enikolopov (Director and Professor at the New Economic School), Daniel Treisman (Professor of Political Science at the University of California), and Sergei Guriev (Professor of Economics at Sciences Po).

The conference began with the first keynote speaker Ruben Enikolopov, who presented his paper on the Politicial Effects of the Internet and social media. Professor Enikolopov explored what the impact and consequences of social media play for today's political environment - explaining how the internet and social media have become an important tool for autocratic regimes as a vehicle to manipulate information. 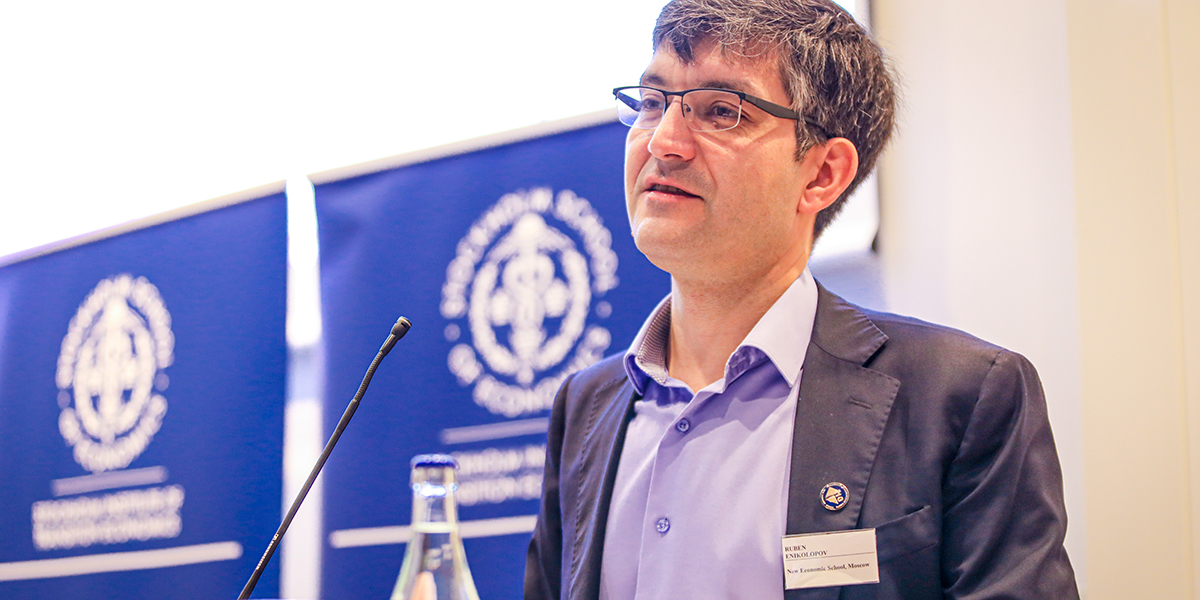 Ruben Enikolopov during his presentation.

In the next part of the conference, the first panel discussed the Current Political Economy of Eastern Europe, featuring Scott Gehlbach (Professor at the Department of Political Science and the Harris School of Public Policy at the University of Chicago), Galina Zudenkova (Professor at the Department of Economics at TU Dortmund), and Andreas Stegmann (Postdoctoral Fellow, at BRIQ - Institute on Behaviour and Inequality).

Scott Gehlbach, opened the first panel by explaining the importance of obfuscated ownership as a strategy to prevent predation in an environment of poor property rights protection. Next, Galina Zudenkova discussed how communication technologies affect protests and governments' choice of censorship. Andreas Stegmann, finally presented his research on how interpersonal contacts between people living in authoritarian regimes and "the outside world" can affect attitudes and beliefs in authoritarian societies, exploiting the East German Extended Visitors Program of 1972. 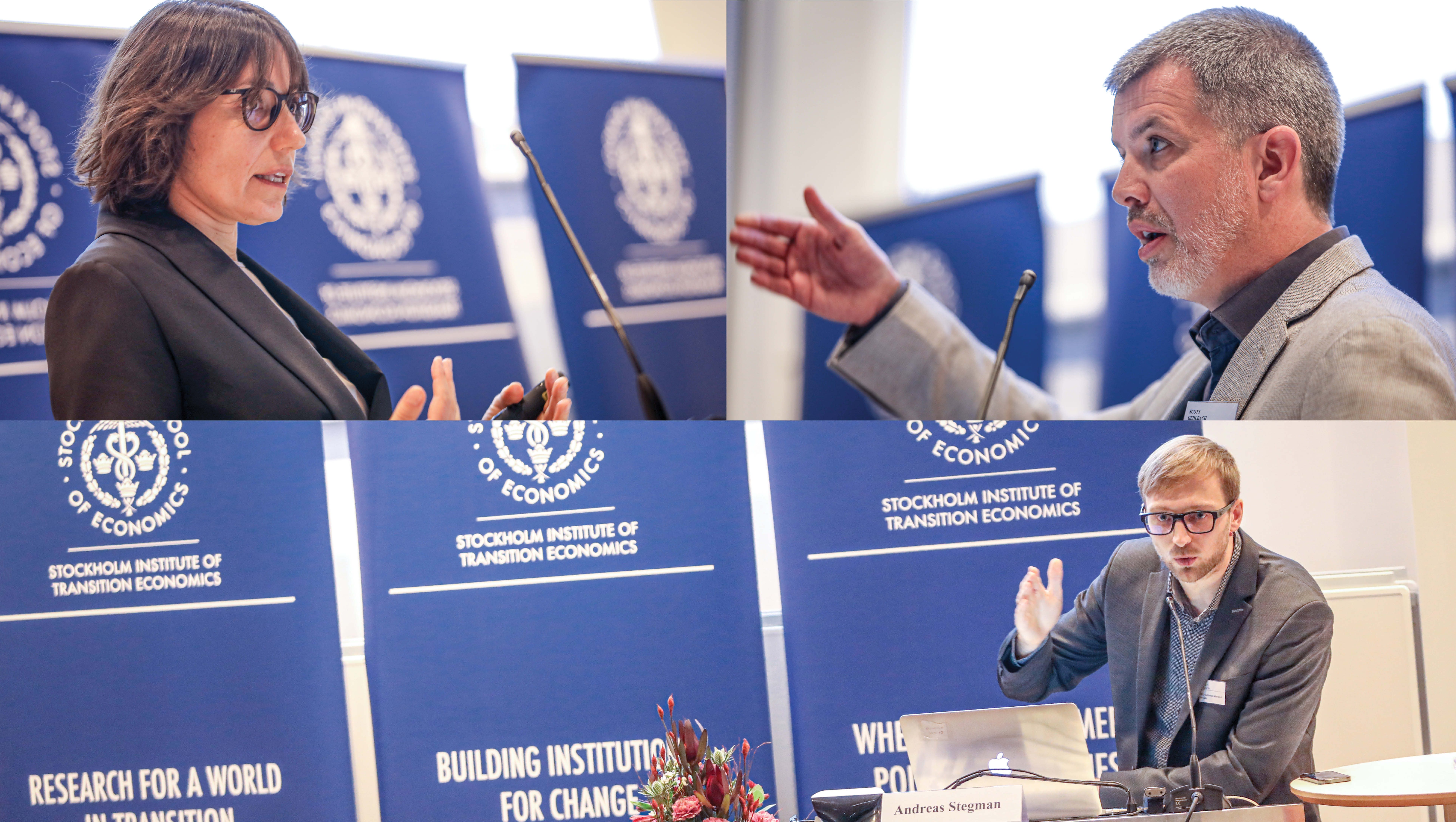 Gerhard Toews discussed the long-run effects of the forced resettlements of the so-called "enemies of the people" on development outcomes across localities of the ex-Soviet Union. Natalya Naumenko, analyzed the the economic consequences of the 1933 Soviet Famine. Christian Ochsner, presented his research on the economic concequences of the temporary occupation of Austria by the Red Army. Finally, Marvin Suesse presented his latest research on the impact of the Russian State Bank on industrialization during the Tsarist regime. 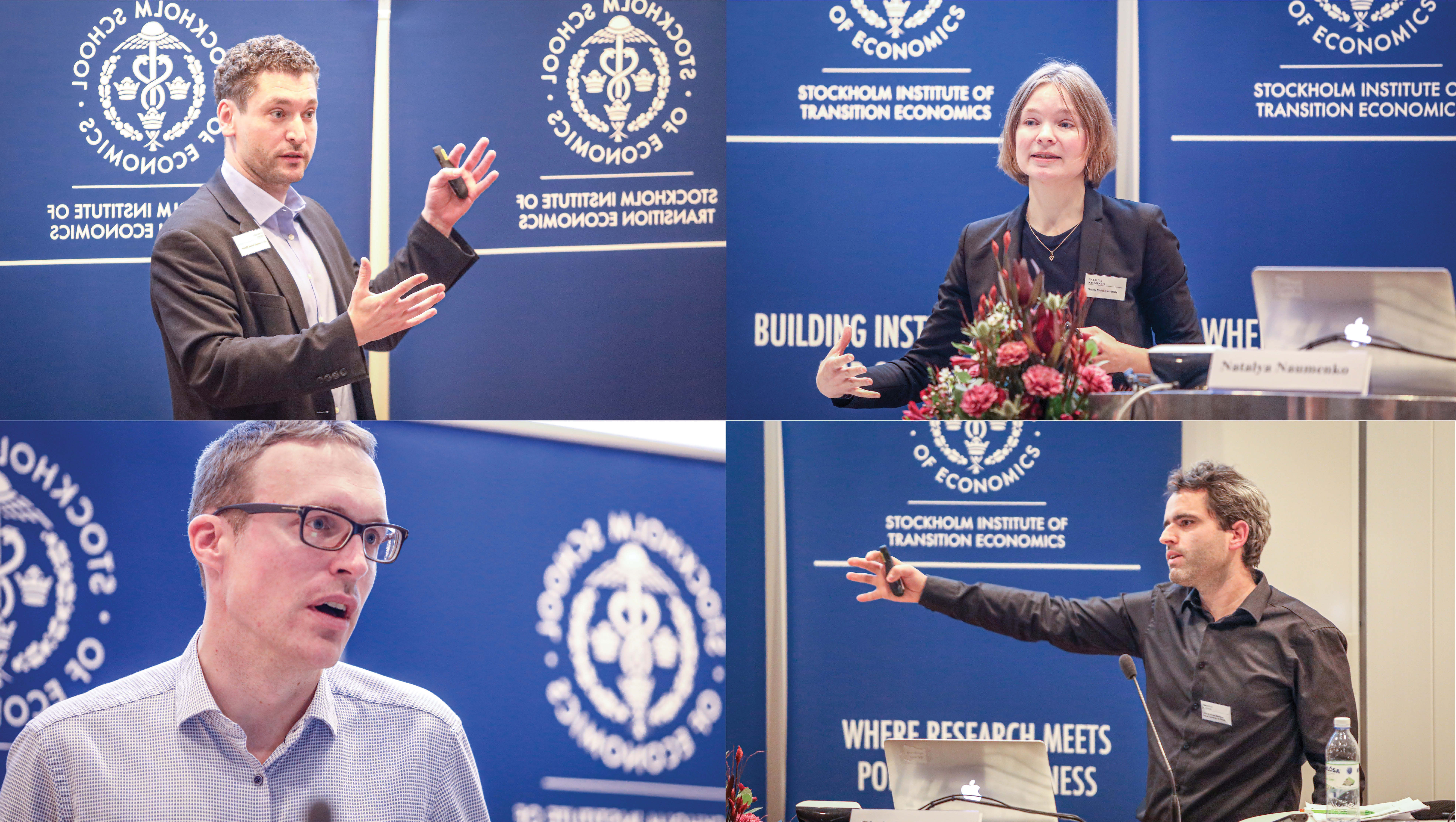 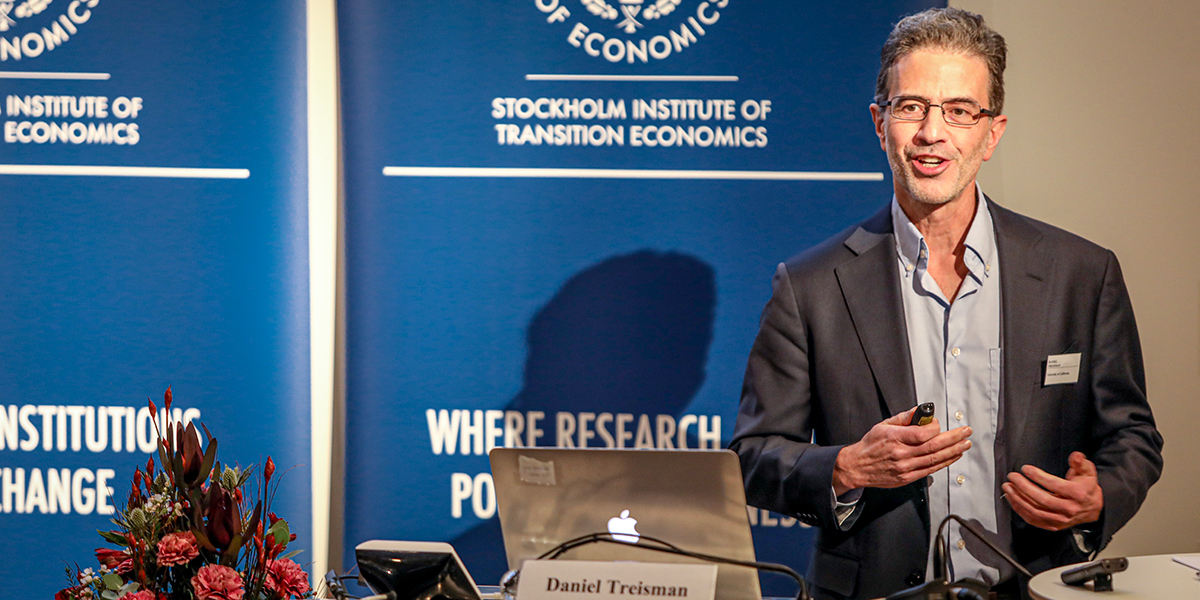 Daniel Treisman during his presentation.

On the second day of the conference, the third panel continued with an analysis of the current political economy in Eastern Europe. Featuring Timothy Frye (Marshall D. Shulman Professor at the Department of Political Science at Columbia University), Michal Myck (Director of the Centre for Economic Analysis, CenEA), Tetyana Tyshchuk (Associate Professor at Kyiv School of Economics), and Vasily Korovkin (Assistant Professor in Economics at CERGE-EI).

First, Timothy Frye initiated his session by presenting his latest research on how employers subvert political elections and shed light on its consequences. Next, Michal Myck discussed how night-time lights from satellite images can help to understand the economic development along the Polish-German border presenting the differences over the last 20 years. Afterward, Tetyana Tyshchuk analyzed a recent civil service sector reform in Ukraine and its impact on civil servants' efficiency. Vasily Korovkin ended the session by presenting his latest research on the economic consequences of the conflicts in East Ukraine on trade and other economic indicators in non-conflict areas. 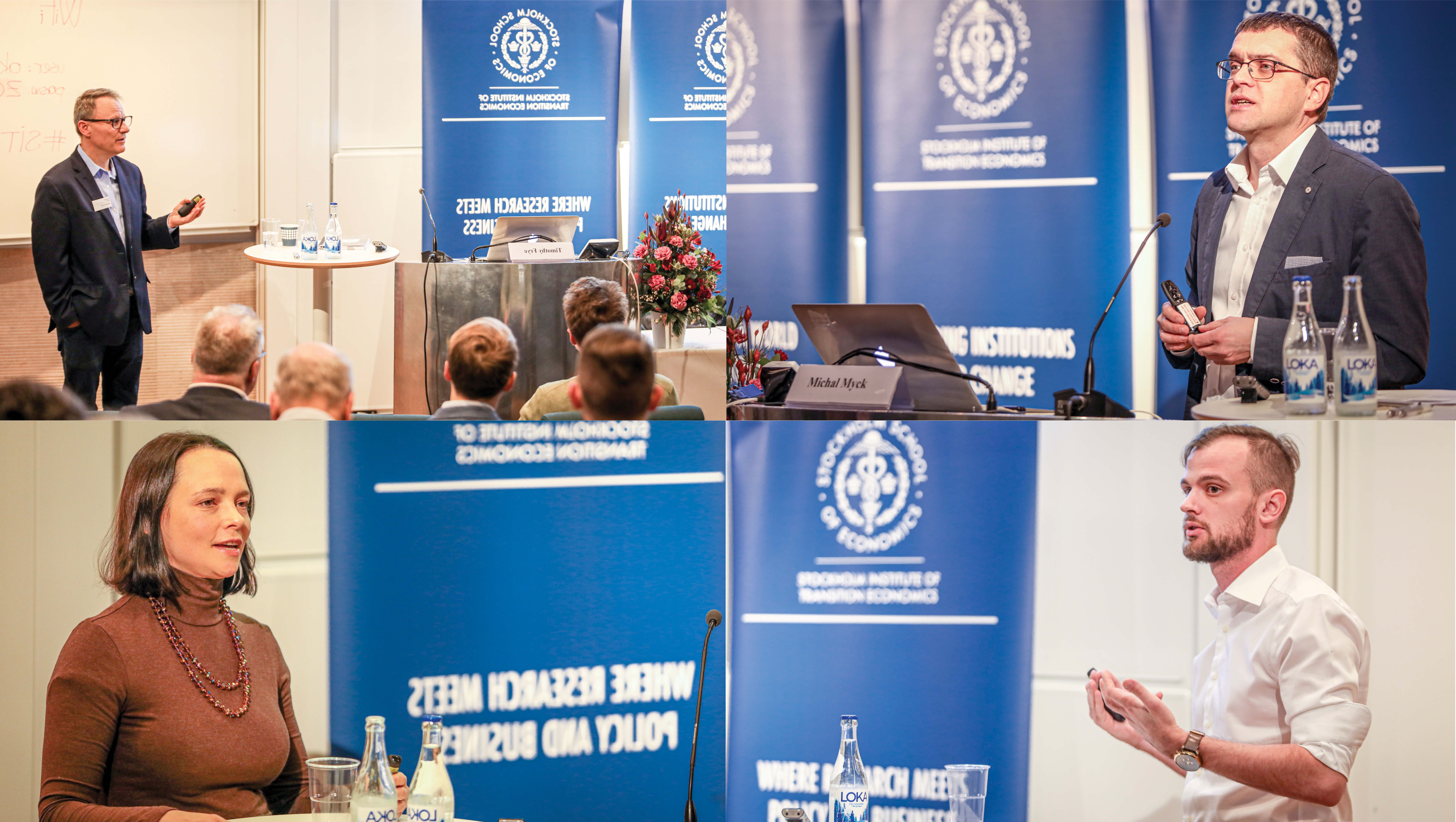 Last but not least, the third keynote speaker, Sergei Guriev (Professor in Economics at Sciences Po) offered a well-reflected analysis of the recent rise of populism in and beyond Europe. Sergei's presentation dived deep into the various definitions of populism and how to understand its rise. According to Sergei, Europe has recently seen a rise in populism which can be related to factors as diverse as globalization, the Internet and new communication technology, but also the 2007 global financial crisis. While economic motives often push people to vote for populist parties, governments led by populist parties do not display above average results with respect to economic performance, though. 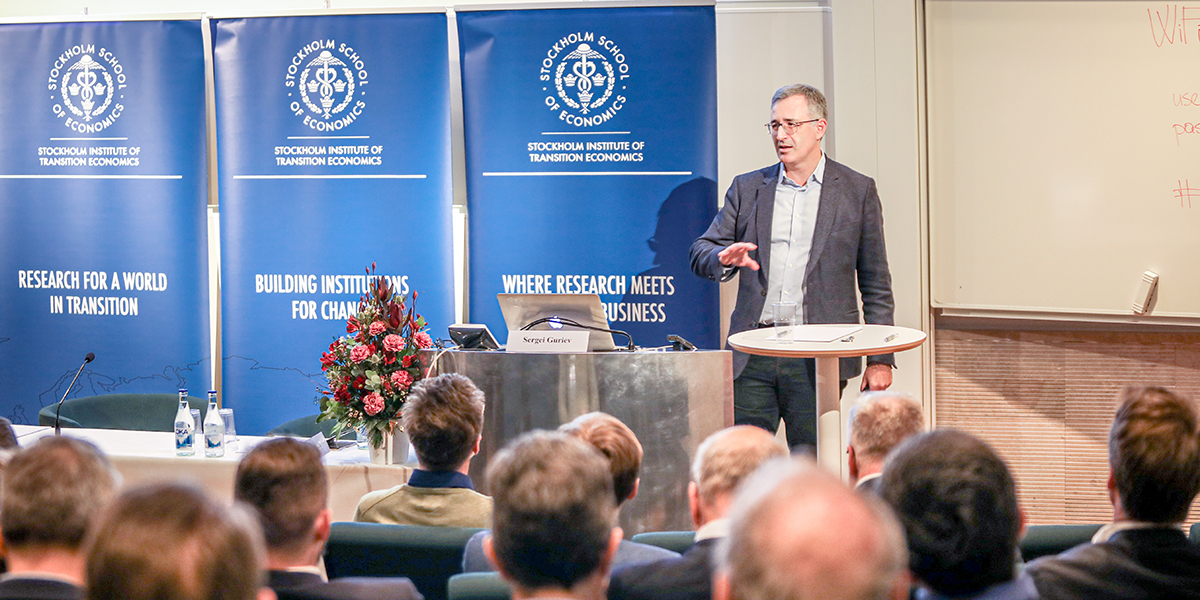 Sergei Guriev during his presenation explaining the recent rise of populism.

The conference was a big success and SITE would like to express appreciation to all the speakers and participants for sharing their knowledge and thank Riksbankens Jubileumsfond for financial support for the conference.

Disclaimer:
SITE regularly organizes seminars and conferences to promote communication and sharing of ideas. Opinions expressed by the speakers and lecturers are those of the authors; they do not necessarily reflect those of the SITE.