Difficult times ahead for the Belarus economy

Policy brief: The Belarus economy was already struggling to generate growth before both the corona pandemic and the political protests following the August presidential election. The lack of growth was the result of an incomplete transition process to modernize the economy combined with a strong reliance on the Russian economy and its dependence on international commodity prices that have not paid off in recent years. With the added political turmoil and, so far, lack of a new political and economic strategy, the economic outlook for Belarus looks grim. Even if a full-blown crisis may be avoided by restrictive economic policies, stagnation will nevertheless be the most likely outcome without fundamental reforms.

The Belarus economy was for many years doing very well under president Lukashenko, but since the global financial crisis in 2008/09, this course has been reversed. The downward growth trend has been exacerbated by both slumps in international oil prices (particularly important because of linkages with Russia, see Becker 2016a, 2016b, 2018, 2020), and the COVID-19 pandemic. This is clearly illustrated in Figure 1, which shows how the average growth rate has fallen all the way to a negative one percent in the years since 2015, while the period before the global financial crisis generated an average growth of 8 percent.

The lack of growth in Belarus and its causes has been analyzed in several papers long before the current developments. Akulava (2015) discusses how the government already five years ago understood that it needs to stimulate the private sector to generate growth; Kruk and Bornukova (2016) in turn describe how growth in the boom years was driven by capital accumulation but not improvements in productivity (TFP) that could have sustained growth in more recent years. As for policies to generate growth, Kruk (2014) argues that Belarus should focus on institutional changes that create the right incentives for firms and lead to a more efficient resource allocation rather than simply spend money on new equipment for existing firms. The need for productivity-enhancing reforms is further stressed in Kruk (2019) who points out that there is limited space to stimulate growth by expansionary macroeconomic policies.

Although the political situation after the election is strongly linked to the lack of democracy and freedom, the citizens’ willingness to protest is most likely enforced by the very poor economic performance of recent years. And while the importance of economic developments is sometimes glossed over in the current reporting and narrative of Belarus it will be an important factor in the popularity of any future government in Belarus as well as the current one. 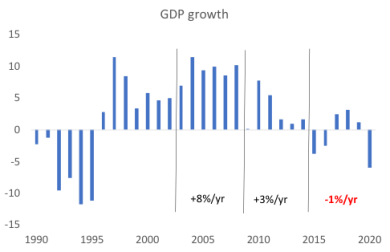 Note: The chart is based on the April 2020 version of the IMF’s World Economic Outlook and in the just-released October edition, the 2020 forecast is less negative due to global economic developments. However, this does not change the general downward growth trend Belarus has experienced.

On the structural side, the economy of Belarus is heavily connected to Russian economic developments, which in turn depends on international oil prices (Becker 2016a, 2016b). In the group of FSU countries, Belarus stands out as the country that has the largest share of its exports going to Russia and the largest share of its FDI coming from Russia. On top of that, Belarus enjoys subsidized prices on oil and gas from Russia that benefits not only its exporting refineries but also other energy-intensive industries that are important for generating export revenues.

Figure 2. Exports and FDI shares with Russia and Rest of the World

As a final background note, the importance of SOEs in terms of employment has gone down in recent years but SOEs are still an important provider of jobs in Belarus and another sign of an unfinished transition agenda. 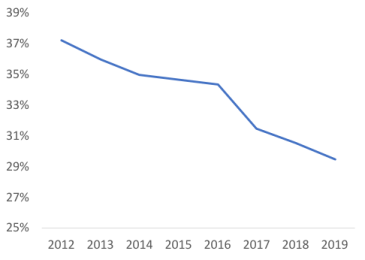 To improve growth prospects, this is clearly a sector in need of reforms, including some privatizations, to make it more competitive and less of a drain on government finances. However, this process will need to deal with sensitive employment issue regardless of who is in charge politically.

Furthermore, Marozau, Aginskaya, and Akulava (2020) discuss how the corona pandemic may threaten the jobs of the over 1 million people that are employed by SMEs. The financial constraints of the government make it hard to offer widespread support to SMEs, and the authors argue that the government should target future winners among SMEs rather than the big losers in the crisis.

The challenge of increased unemployment is further exacerbated by the lack of an unemployment benefit system with extensive coverage (Bornukova, 2017). The lack of a well-targeted social security system could lead to a new increase in poverty rates. Mazol (2019) shows how past crises had a negative impact on poverty with absolute poverty increasing almost twofold in 2015/2016.

The economy in Belarus was facing challenges (like much of the world) this year due to the COVID-19 pandemic well before the political crisis following the August election triggered additional problems. The IMF growth forecast for the year was well into negative numbers and given the (not always stable) links to Russia and thus to oil prices, the longer-term outlook was cloudy as well. Although the IMF’s October forecast shows less negative growth for 2020 (from minus 6 to minus 3 percent as the world is expected to see less of a contraction due to the COVID-19 pandemic), the longer-term outlook is one of stagnation with annual growth of around 1 percent.

For 2020, the economic and political difficulties can be seen in exchange rate developments as well as in the evolution of foreign exchange reserves (Figures 4 and 5).  In some ways, the 25-30 percent depreciation of the currency viz the dollar and euro is not the full story on the currency, since the exchange rate viz the Russian ruble has been much more stable. Given the close links to the Russian economy, this is quite important to note. Indeed, foreign currency reserves (the more liquid part of international reserves) have gone down by some 40% this year but are still at around 3 billion USD.

Additional pressure on the financial system in the past months came from significant withdrawals and people moving their savings to hard currencies after the August election. Krug and Lvovskiy (2020) discuss how this development is driven by political turmoil and also how the lack of trust that is currently generated in the system will lead to further stagnation of the economy. This line of reasoning is supported by Mazol (2018), who shows how financial stress in the past has contributed to costly economic contractions. 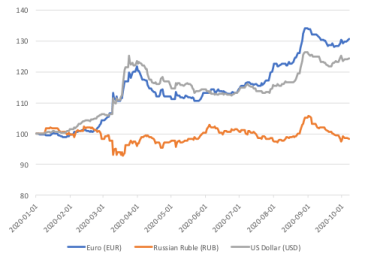 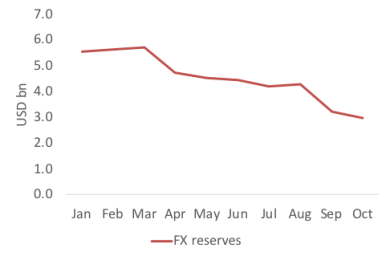 The current economic policy will not generate growth in the short or long term by itself and the current political situation is clearly affecting growth negatively. The current political leadership could of course once again turn to Russia to ask for economic assistance in various forms, including loans, subsidies, or investments. Given the situation in Belarus, this will clearly come at a high political cost that will not necessarily be immediately transparent to people in Belarus or the outside world. Further, a sufficient level of assistance is not bulletproof either – Russia is itself facing difficult economic times ahead, both because of the COVID-19 pandemic and its impact on oil prices but also because of its own inability to generate sustainable growth that is not based on oil, gas and minerals (Becker, 2018, 2020).

How long the political and economic repression can go on without triggering a full-blown meltdown of the financial system in Belarus is anyone’s guess. Unfortunately, a policy mix of more restrictions on financial and exchange transactions in combination with accepting stagnation has been shown to be a model that has “worked” from Cuba, to Iran, Venezuela and North Korea for very long periods of time, so there are no given deadlines for such regimes.

Regardless of short-term policy changes, Russia will remain an important economic player in Belarus for a long time unless something dramatic changes. If there is a transition of political power in Belarus, any new political leadership will have to make careful choices with regard to its relationship with Russia. Quickly cutting ties to its big eastern neighbor could turn out to be very costly for Belarus from an economic perspective given the structure of trade, subsidies, and investments between the two countries.

If the EU (or the West more generally) wants to provide Belarus with a realistic economic alternative to Russia in the short run, it will need to provide substantial funding and strongly support a wide-ranging economic reform program that will need to address transition issues that most of its neighbors did many years ago. This will involve not only selling state assets to foreign investors but also changing the economic system from the ground up, including institutions and management practices. Another important part of the needed change is modern Western education. The importance of higher education institutions (HEI) to generate growth in Belarus is stressed by Marozau (2019), who discusses the role of HEIs in improving productivity and how the universities in Belarus fail to stimulate innovation and entrepreneurship.

The support package may not be cheap for the EU financially but helping the people in Belarus to finally make the transition to a modern, democratic market economy on the doorstep of the EU would certainly be worth it. The question is if the EU will manage to unite around such a policy in a time of COVID-19 lockdowns and economic hardship within its current boundaries. Patience may be required among those that fight for their freedom and a new economic model in Belarus.

Disclaimer: Opinions expressed in policy briefs, working papers and other publications are those of the authors; they do not necessarily reflect those of the FREE Network, SITE and its research institutes.

Note: This policy brief has been re-uploaded. It was originally published 19 October, 2020.

Torbjörn Becker in Dagens Industri: “Neither Russia nor the West has anything to gain from an enlarged conflict in Ukraine”

Russia’s macroeconomy — a closer look at growth, investment, and uncertainty