Carrots, sticks, sermons, and nudges during the pandemic

There are many ways to change public behaviour, but not all are equally popular.

In this article, Gustav Almqvist and Patric Andersson discuss policy implications of nudging during COVID-19. Conducting a survey with 596 individuals in Sweden, the authors show that individuals are fine with nudges but that they prefer traditional methods of governmental interventions such as economic incentives (carrots), mandates (sticks) and information (sermons). A conclusion is therefore that policy makers should use nudging with caution when potentially better alternatives exist.

In recent years, much attention has been drawn to the idea that simple behavioral tools can influence human actions and choices. This idea, commonly referred to as nudging, rests on the assumption that individual actions and choices can be aligned with their own or the society’s best interest by using subtle measures. Nudging has thus become a buzzword and is considered by many policy-makers and decision-makers in business to be an effective method to influence and alter human behavior.

In this chapter, we discuss the use of nudging as well as the traditional tools of interventions by the government to exert influence over citizens. Our aim is to provide governments and political decision-makers with guidance on the public support for different types of interventions. Our discussion is based on a survey featuring a representative sample of 596 Swedish respondents. We will make the following argument:

Nudges are not necessarily more popular than the traditional ways in which to influence citizens. Nor is this the case during the COVID-19 pandemic. People may still prefer carrots (economic incentives), sticks (mandates), and sermons (information).

The devil is in the details

As highlighted by news media across the globe, The Swedish Model was an outlier in terms of the authorities’ response to the COVID-19 virus. While many European countries implemented strict social distancing measures and we saw several cities placed in lockdown, the Swedish strategy remained relatively liberal. Statements made by the Government and Anders Tegnell, state epidemiologist at the Public Health Agency, indicated a strategy similar to that first adopted by the U. K. While the specifics of the strategy may be somewhat hard to obtain, the strategy was scientifically informed. And nudging was integral to the government’s strategy.

A universal goal among governments fighting the pandemic was to flatten the curve of new infections so that their respective healthcare systems would not become overwhelmed. Initially, the governments in the UK and Sweden both selected interventions that they assumed would be more sustainable over time because citizens would not grow tired of them. Mitigating behavioral fatigue would ensure compliance.  The rationale may have sounded reasonable, but in an open letter to the U. K. Government on March 16, 2020, almost 700 behavioral scientists and experts pointed out the lack of evidence that behavioral fatigue even exists (UK Behavioral Scientists, 2020). This controversy relates to the large body of empirical research that casted doubts about vague concepts and buzzwords in behavioral research that mischaracterized people’s thinking (see Gigerenzer, 2015).

Herd immunity was another key concept during the initial phases of the crisis. David Halpern, a member of the Scientific Advisory Group for Emergencies (SAGE). He explained the reasoning behind relying herd immunity to the BBC on March 11, 2020.

There’s going to be a point, assuming the epidemic flows and grows, as we think it probably will do, where you’ll want to cocoon, you’ll want to protect those at-risk groups so that they basically don’t catch the disease and by the time they come out of their cocooning, herd immunity’s been achieved in the rest of the population.

In its simplest mathematical form, the proportion threshold for herd immunity is the inverse of the basic reproduction number (R0). If the average virus-carrier infected 2.5 others (that is, R0 = 2.5), as data indicated at the time, new infections would cease to grow once 60 % of the population had been infected. The high-risk groups could then safely be released from their cocoons, Halpern and others hoped. Unfortunately, when you allow for imperfect immunity and heterogeneous populations with non-random mixing, it makes things more complicated (Fine, Eames, & Heymann, 2011). It turned out herd immunity was not guaranteed to work as planned.

Herd immunity also had a negative feel to it. Say herd and one thinks of cattle. It sounded cynical, as if the governments wanted people to get infected. The U. S. President referred to “the herd” as a disastrous strategy, from which Sweden was suffering badly and it did not take long for the U. K. and Swedish governments to publically deny ever having relied on herd immunity.

Behavioral fatigue and herd immunity were general concepts that supposedly called for strategies that no one seemed to fully understand. When such strategies malfunction, it may hurt a government’s long-term trustworthiness. When commenting on the UK’s behavioral strategy, the law Professor Anne-Lise Sibony (forthcoming) concluded: “governments can misuse behavioural arguments and tarnish a reputation for sound evidence-based policy-making”.

A dummies guide to the methods for changing citizens’ behavior

For the past years, we have surveyed the public support for nudges and similar types of behavioral tools. Built on research in psychology and behavioral decision-making, nudges subtly influence the way choices are presented in order to influence people’s decisions in a predictable manner, while maintaining freedom of choice (e.g., Thaler & Sunstein, 2008). But nudges are not the only way in which to influence people. For governments, there are also information (sermons), economic incentives (carrots), and mandates (sticks). Neither of whose influence should be underestimated (Loewenstein & Chater, 2017).

Arguably, the simplest way to influence human behavior is to inform people about the positive and/or negative consequences of a certain action. For example, if one strives to have plastic bottles recycled in greater number, one could run public informational campaigns to create awareness of the benefits of recycling and the environmental damage caused if bottles were not to be recycled. Alternatively, one could use conventional economic incentives as means to alter human behavior. Economic incentives are manifested in terms of benefits, taxes, and subsidies. In our example of recycling plastic bottles, one could offer a certain amount of money for each plastic bottle that is returned. Another way to influence human behavior is to use mandates such as prohibitions and regulations. In our example of recycling, a government might simply ban plastic bottles altogether. In the following, we will refer to these three types of traditional interventions as sermons (information), carrots (economic incentives), and sticks (mandates); and compare them to nudges.

The Swedish public support for carrots, sticks, sermons, and nudges

In the midst of the COVID-19 outbreak, we conducted an online survey to empirically investigate the public support in Sweden for additional measures to prevent the virus from spreading and to mitigate its economic consequences. Specifically, the survey included seven sets of questions related to COVID-19 and was sent out, in collaboration with the marketing research company Norstat, to a representative sample of the Swedish population, ages 18-70 years. In all, 596 (286 females) respondents answered the survey between March 30th and April 6th 2020.

The first question was whether additional measures were needed against the spread of the virus, for the purposes of people’s health and the national economy. About 76% supported such measures, while about 13% were hesitant and 11% were negative towards additional measures. No substantial differences in responses were found with respect to demographic background variables like gender, age, education, income, and region of residence.

The respondents were asked to rate their opinion of five hypothetical governmental measures against COVID-19. 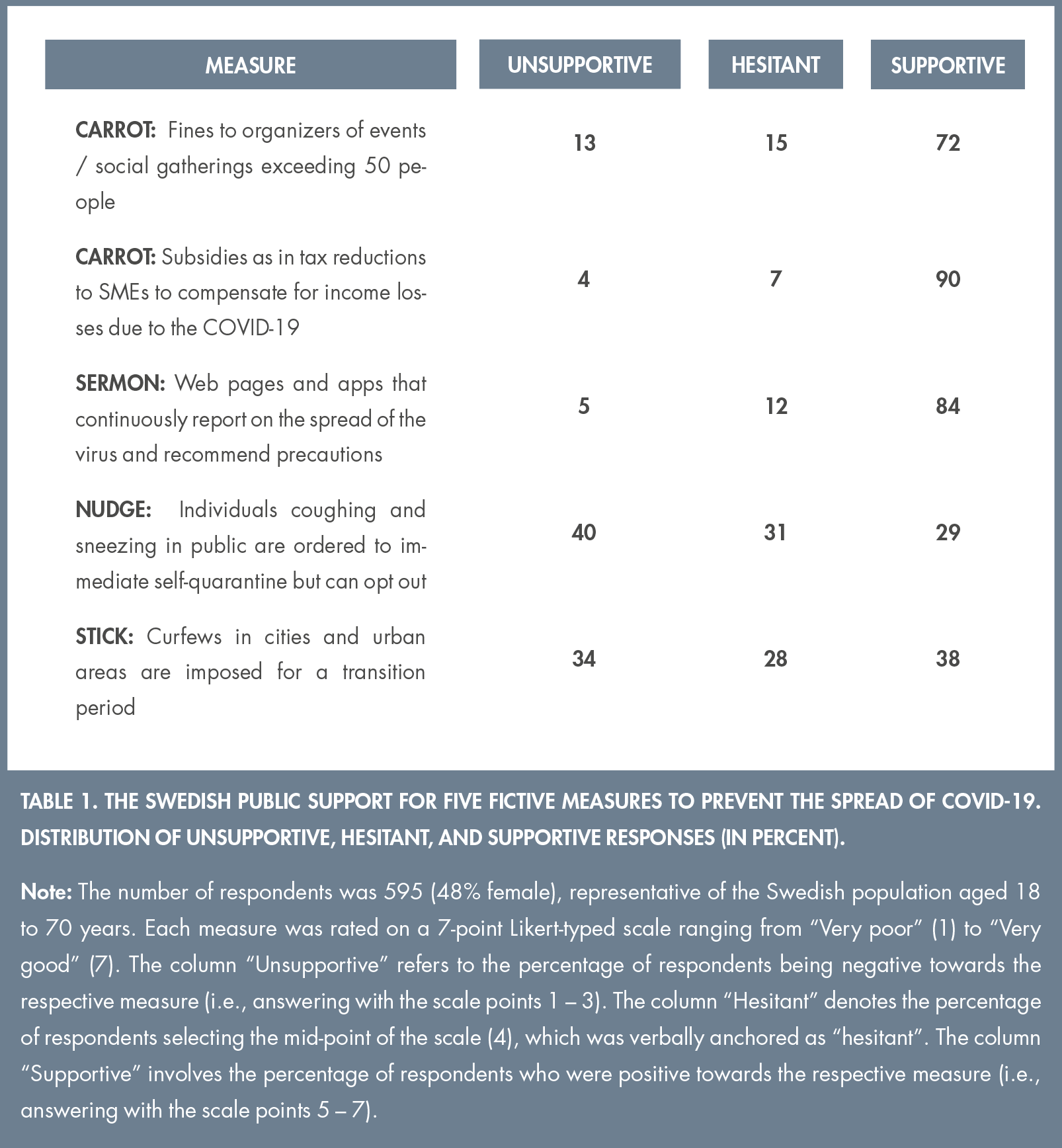 Table 1 shows how those five measures were perceived by the respondents. The most popular measures were the positive carrot and the sermon. About 90% and 84% were supportive to subsidize SMEs informing via webpages and apps. Limited support was obtained for the stick and the nudge. Temporary curfews had roughly equally as many proponents as opponents. The nudge was the least preferred measure, with about 29% positive and 40% negative.

We also investigated whether the answers differed across demographics. The only statistically significant difference was that female respondents tended be more supportive towards the five measures, especially the subsidies to SMEs and information via webpages and apps. Some interesting but statistically non-significant tendencies were also found. Respondents from the county of Stockholm were somewhat less supportive (and more unsupportive) towards curfews, while most respondents from the less populated region of North Middle Sweden supported such measures.

In conclusion, our results from the survey echo what we have found in our previous empirical investigations. People are typically fine with nudges, but they often tend to prefer traditional methods of governmental interventions. Accordingly, governments need to consider how the popularity of behavioral tools like nudging compares to the methods already at their disposal. They are advised to nudge with caution.

U.K. Behavioral Scientists. (2020). Open letter to the UK Government regarding COVID-19. [Blog post]. Retrieved on May 10 2020 from https://sites.google.com/view/covidopenletter/home