The southern Urals as a touchstone for Soviet wartime performance

Policy brief: As time passes and archives open, ever more topics in Russian military-economic history can be studied with primary sources. One such theme is the colossal evacuation of industrial enterprises and equipment from July 1941 onwards. Thousands of railway cars and lorries carried equipment, raw materials, as well as personnel from Ukraine, the Baltics, and western regions of the Russian Federation to the Urals and beyond.

A recent documentary collection Put’ k Pobede (The Road to Victory) opens new areas for research on the southern Urals. These regional sources illustrate and add details to documents from the federal archives on the history of the Soviet military-industrial complex. Successful evacuation of industrial capacity eastwards was a decisive factor for the Soviet endurance and finally its victory in 1945. However, many empirical questions remain to be answered and analytical calculations to be done, on how in fact the Soviet system managed simultaneously to successfully evacuate factories eastwards and thousands of troop transports westwards to the fronts.

The role of the new industrial centers in the Urals and Siberia for the Soviet defense potential has been recognized long ago (1). From the mid-1920s, Soviet military leaders included projections for full mobilization of industrial and human resources in contingency plans for the case of war. Evacuation projects outlined which important factories were to be re-located from close-to-border areas (within the range of enemy air bombings) to well-prepared interior locations (2). Industrial plans in the late 1930s put significant emphasis on the enhancing of defense-related production, as well as on modernization of the armed forces (3). 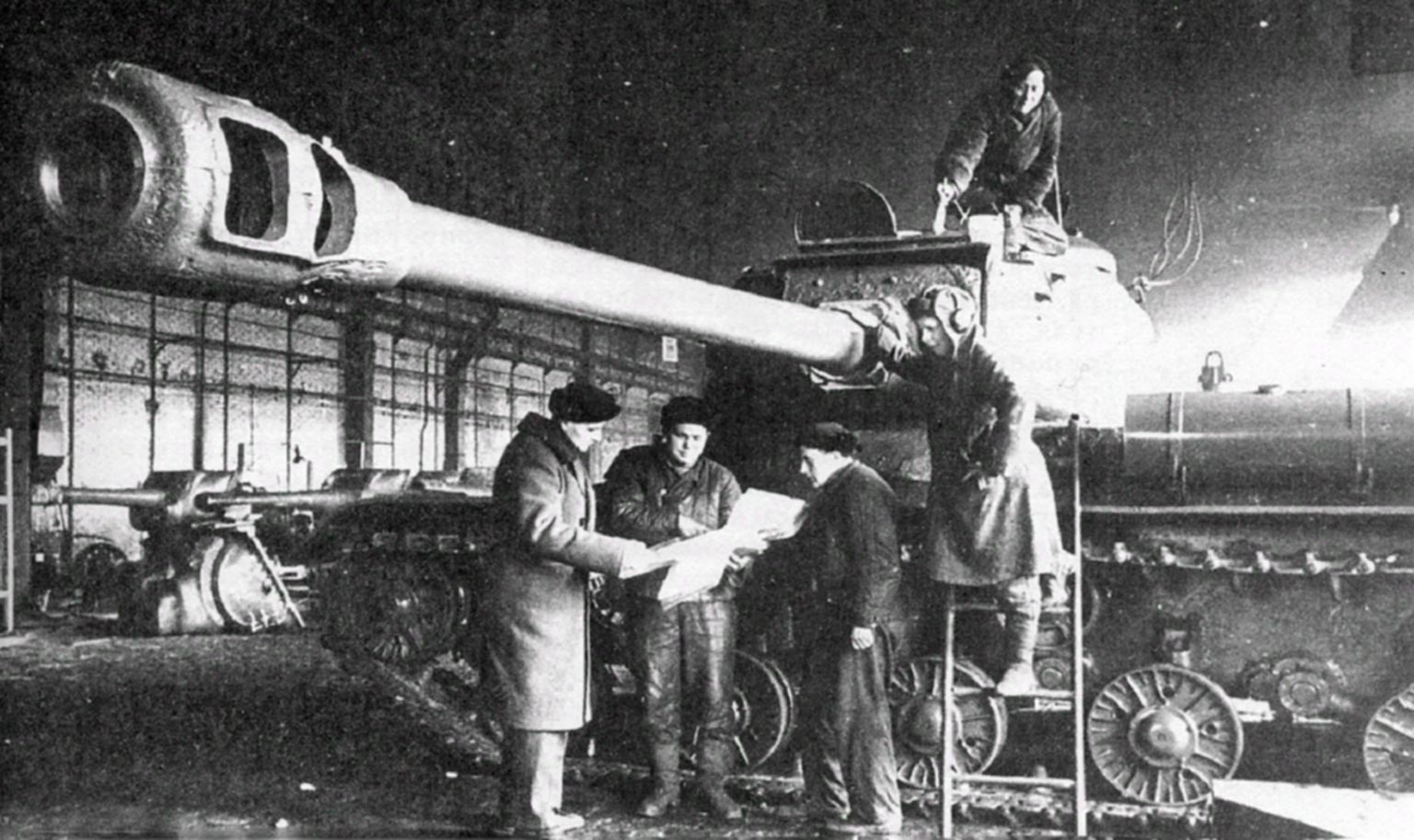 Photo 1: Checking the blueprints for IS heavy tank at the Kirov Tank Factory in Cheliabinsk.

In the early 2000s, a grand research project started on the history of the Russian and Soviet military-industrial complex by exploring the main federal archives (GARF, RGAE, RGVA, and others). The project has so far resulted in five volumes that cover the period from 1914 till 1942. The first volumes show the evolution of the Russian defense industries until the mid-1930s, with special emphasis on how military considerations influenced the five-year plans for 1928–32 and 1933–37. The fourth volume starts (p. 5–85) with a historical preface by Professor Andrei Sokolov (1941–2015), who was also the author of a most informative study of the military-industrial complex. It contains documents for the crucial period up to June 1941 (4). The fifth volume reproduces relevant documents from several archives concerning the first war-years 1941 and 1942. (5)

How did Soviet security concerns change in the first stage of World War Two? In August 1939, the Red Army won a momentous victory over the Japanese forces at Khalkhin-Gol in Mongolia. Japan thereafter gave up their invasion plans against the Soviet Far East, and shifted its aggression southwards to the Philippines and Indochina. Thus, the risk diminished considerably of the USSR facing a two-front war, with tough enemy coalitions in Europe as well as in the East. (6). This strategic significance of the Red Army’s victory was apparently missed in Berlin. In 1940, the German military leaders paid attention mostly to the poor performance of the Soviet army in the Winter War against Finland (7). Encouraged by an easy victory over France by June 1940, Hitler ordered Wehrmacht to plan for war against Russia.

When the Soviet leaders in 1939 concluded a non-aggression pact with Germany, they obviously calculated that France and Great Britain were to wage a long-drawn-out war against Germany for many years, yet with uncertainty as to who would be the winning one. The drastically changed outlook after the sudden defeat of France in 1940 challenged the Soviet leaders to speed up already expansive plans for military-industrial production.

The American engineer John Scott who had worked as a welder in Magnitogorsk in the 1930s, and thereafter as a correspondent in Moscow for a British newspaper, compiled a massive dossier for the Research and Analysis department of the American intelligence O.S.S. (Office of Strategic Studies). His 1943 exhaustive “Heavy industry in the Soviet Union east of the Volga; a report prepared for the Board of Economic Warfare” covered a unique amount of data on new industrial enterprises obtained from open sources. While stationed in Stockholm as O.S.S. agent later in World War II, under the cover of a Time-Life correspondent, John Scott lectured in many cities in Sweden over his best-selling book “Behind the Urals”, which in Swedish had the more pertinent subtitle “The secret of the endurance of the Russian defense” (8). Scott emphasized that Stalinist forced drive in the 1930s had created completely new industrial zones far beyond the borders, out of reach for even long-range German air raids. This had been a revelation for many Westerners. British and American military attachés in Moscow were profoundly mistaken in 1941 when they predicted a rapid German victory. As Hitler’s Operation Barbarossa came to a standstill in the winter of 1941-42, Western assessments of the real Soviet military-industrial capabilities had to be reconsidered (9).

Relocation of a Minor Industrial Nation – the 1941-42 Evacuations

A crucial factor – likewise often neglected in Western historiography – for the Soviet military-industrial endurance was the evacuation of industry. In an unprecedented way, another Soviet defense-industrial basis would rapidly emerge east of Volga, in the Urals and in Siberia.

A fundamental Russian 12-volume work on the Great Patriotic war describes main traits of the industrial evacuation (10). Already a few days after the German invasion, the situation on the fronts forced the Soviet leadership to consider completely unexpected scenarios. It was soon obvious that the German invasion could not be stopped, as the principal Red Army doctrine had expected, at the borders. All pre-war considerations of how to mobilize the Soviet military-industrial potential were up for revision. The unforeseen disasters on Soviet territory, not covered in pre-war plans for industrial mobilization, led to the formation of a council for evacuation of factories. Tens of thousands industrial workers and millions in the civilian population must be evacuated.

The massive evacuations of entire factories, or at least the most crucial equipment, started already in July 1941 from the Baltic republics, Ukraine, and Russia’s Western regions. The council on the evacuation sent directives concerning which factories to relocate eastwards and to which cities. 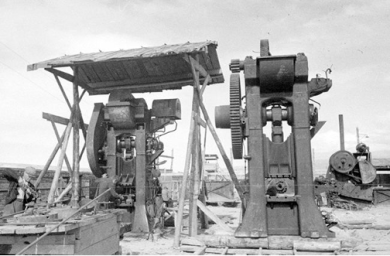 Photo 2: Evacuated equipment installed, under open skies, even before the factory walls were built!

Evacuation organs were responsible for rail, road, and river transports, as well as for the integration of evacuated resources to existing factories or to new building sites.

Facilities and stock that could not be evacuated were destroyed so as not to fall into the hands of the enemy (“scorched earth policy”). Most complicated from a logistic point of view was the evacuation of the industrial, transport, and energy production facilities. These had to be constantly re-adapted as the military situation changed with the German armies’ further advance towards Moscow, Leningrad, and in Ukraine in particular. Troop transports towards the fronts had priority; thus, evacuation trains sometimes had to wait on sidetracks for many days. 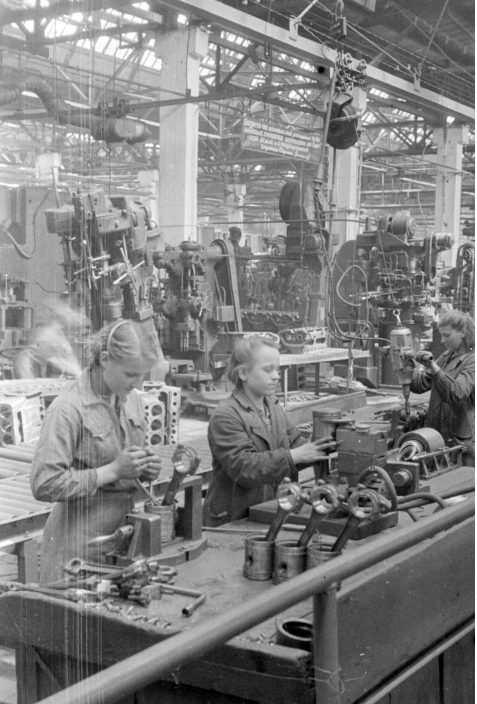 Photo 3: Assembly of engines at the Urals Automotive Factory (UAZ) in the Miass city.

Hundreds of thousands of civilians were evacuated from Ukraine, southern and western parts of the Russian Federation, and sent to Uzbekistan and other interior regions. Western literature has described few aspects of the evacuation, with emphasis on problems by influx of thousands of refugees, e.g. in the cities of Kirov (now Viatka) and Tashkent (11).

Mentioned should be the successful evacuation of the country’s cultural treasures. One telling example is how the staff of the Hermitage museum and hundreds of volunteers in Leningrad managed to pack down much of the museum’s exhibits. Over a million works of art were sent in special trains to Sverdlovsk (now Ekaterinburg), where they were safely stored until 1945. Remaining paintings and sculptures were stored in the underground of the Hermitage. When evacuation could not be accomplished, German occupation forces plundered art collections, and thousands of war trophies sent home by Nazi generals.

In regional studies more complex, detailed analyses of the evacuation, its successes and failures have been presented. A documentary collection Put’ k Pobede (The Road to Victory) from the Cheliabinsk State Archives (OGAChO), shows how formerly restricted topics can be studies as archive holdings are declassified. The Road to Victory contains over sixty photocopied documents. It gives short biographies of industrial managers and contains many pertinent photographs from enterprises. The interested reader of the photocopies will find a great amount of new information that calls for analysis (12). One of the primary findings in the archives is that the number of enterprises, whole or parts thereof, set up and restarted in Cheliabinsk and other cities in the southern Urals were 329 enterprises from 27 different ministries (commissariats). That is substantially larger a figure than the previously assumed number of enterprises. The leading historian on this topic, Marina Potiomkina, professor at the G.I. Nosov Magnitogorsk State Technical University, gives a thorough presentation of how evacuated enterprises in fact managed to integrate into the existing factories (13). The dimensions of this emergency relocation of entire industrial plants are enormous. Often German troops were approaching closely and the factories were under bombardment. One striking example is the report on evacuation from Zaporozhie to Magnitogorsk in 1941 as the front skirmishes already threatened several factories.

Historians like to unscramble interesting information from seemingly peripheral, marginal notes in such documents. There are lots of “food for thought” in the commentaries by the wartime managers. The reader furthermore gets a clear perspective on the massive change of the urban landscape in the region. The new administrative structure is reflected in biographies of leading managers and designers, in detailed information on every known evacuation site, as well as in the characterization of affiliate people’s commissariats (ministries) that were moved from Moscow to Cheliabinsk. Important wartime reports with photos, diagrams, and drawings are reproduced in a rich illustrative section of this book. The documentary clarifies how the relocation of equipment from the Kirov Works in Leningrad to the Tractor Factory in Cheliabinsk laid the foundations for the consolidated tank industry in the Urals. Contemporary correspondence reflects both complaints and achievements, in particular under the most severe conditions in winter 1941–42. 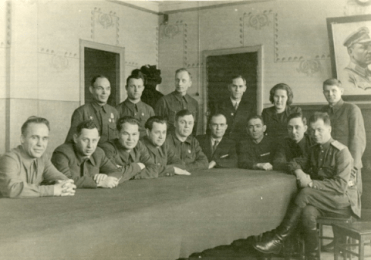 At the end of the war in 1945 many cadres, engineers, and workers could return to their home cities in western parts of Russia. The Cheliabinsk region had undergone dramatic changes. It was then a mix of the original factories, established in the 1930s or even earlier. To this was added trainloads of evacuated equipment from Leningrad, Kharkov, and other cities. New branches, in particular of defense-related industries thus formed the basis for the postwar planning. Any of the documents in Put’ k Pobede can serve as a starting point for discussions concerning the undoubtedly strong aspects of the Soviet command economy, on the one hand, and also on which reforms might have been called for even at that time period, on the other hand.

In conclusion and forward-looking, it should be mentioned that Professor Potiomkina has recently surveyed the entire historiography of Soviet wartime industrial evacuation. Her article includes not only her own and others’ works on the Urals, but also an impressive number of contributions from other regions. Her evaluation of the character of the evacuation calls for a stricter methodology, for a common conceptualization, and for a better grasp of the primary sources, in order to estimate the relative weight of planning versus improvisation, of success stories as compared to failures in the evacuation process. (14)

Note: With permission by Cheliabinsk Regional Archive (OGAChO), the author, SITE and FREE Network are allowed to upload and use the images in this policy brief.