Pollution and the COVID-19 pandemic: Air quality in Eastern Europe

Policy brief: The COVID-19 pandemic has drawn attention to a pre-existing threat to global health: the quality of air in cities around the world. Prolonged exposure to air pollution has been found to increase the mortality rate of COVID-19. This is a particular concern for much of Eastern Europe, where emissions regularly exceed safe levels.

This policy brief analyses recent data on air quality in the region and the factors that explain a persistent East-West divide in pollution in Europe. It concludes by evaluating to what extent lockdowns in 2020 provided a temporary respite from pollution in the region.

"What are the main sources of air pollution in Eastern European cities and can they be addressed by policymakers?"

The WHO estimates that air pollution causes seven million premature deaths every year (WHO 2018). COVID-19 has further amplified these health risks, as air pollution can increase both the chance of catching respiratory diseases and their severity. At the same time, the pandemic has resulted in lockdowns and a general slowdown in economic activity which are widely perceived as having led to a temporary improvement in air quality.

Most measures of air quality in Europe show a stark East-West divide. Map 1 plots the share of days in 2019 where air pollution, as measured by PM 2.5 (fine particulate matter), exceeded levels classified as unhealthy for the general population. On average, cities to the east of the former Iron Curtain experienced over 100 such days, compared to an average of 20 days in Western Europe. These averages mask significant variation within both regions; Tallinn was among the best performing cities while Naples was among the worst. 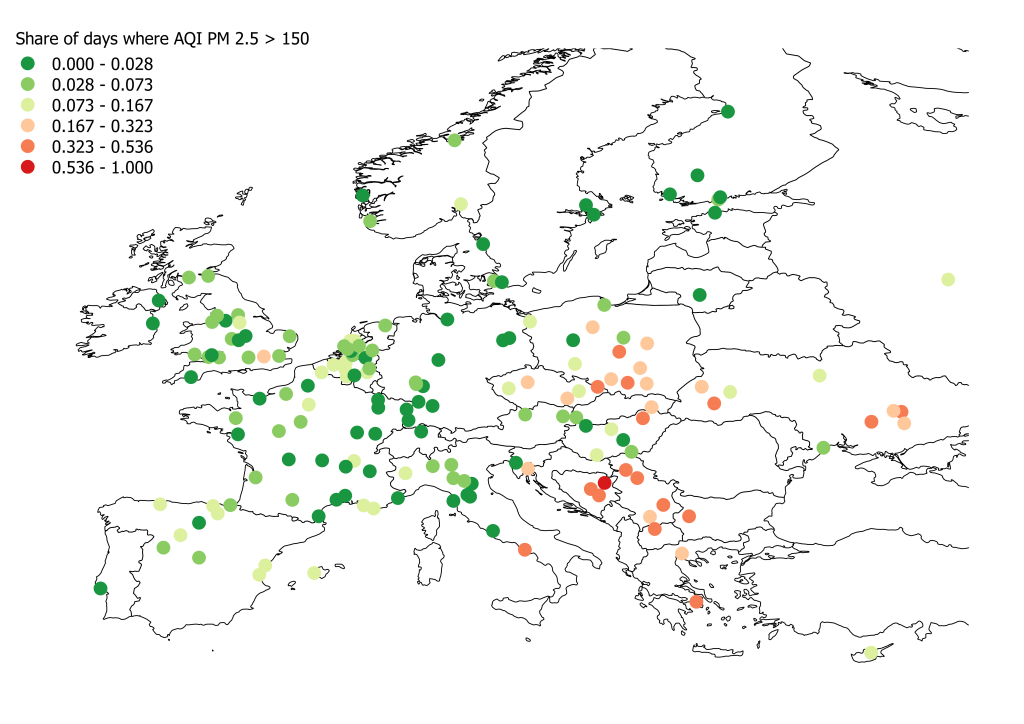 Source: Author’s calculations based on data from the World Air Quality Index COVID-19 dataset. Above the threshold AQI of 150, PM 2.5 levels are classified as unhealthy to the general population by the US EPA.

The gap in air quality between Eastern and Western Europe has been linked to differences in health outcomes for decades. Shortly after the fall of the Soviet Union, Bobak and Feachem (1995) found that air pollution accounted for a significant share of the Czech Republic and Poland’s mortality gap with respect to Western Europe. The European Environment Agency’s 2020 report provides estimates for ‘years of life lost’ attributable to different pollutants. Figure 1, which plots these estimates for PM 2.5, highlights the fact that Eastern European countries, in particular those in the Balkans, continue to experience significantly higher mortality related to pollution, as compared to their Western European counterparts. 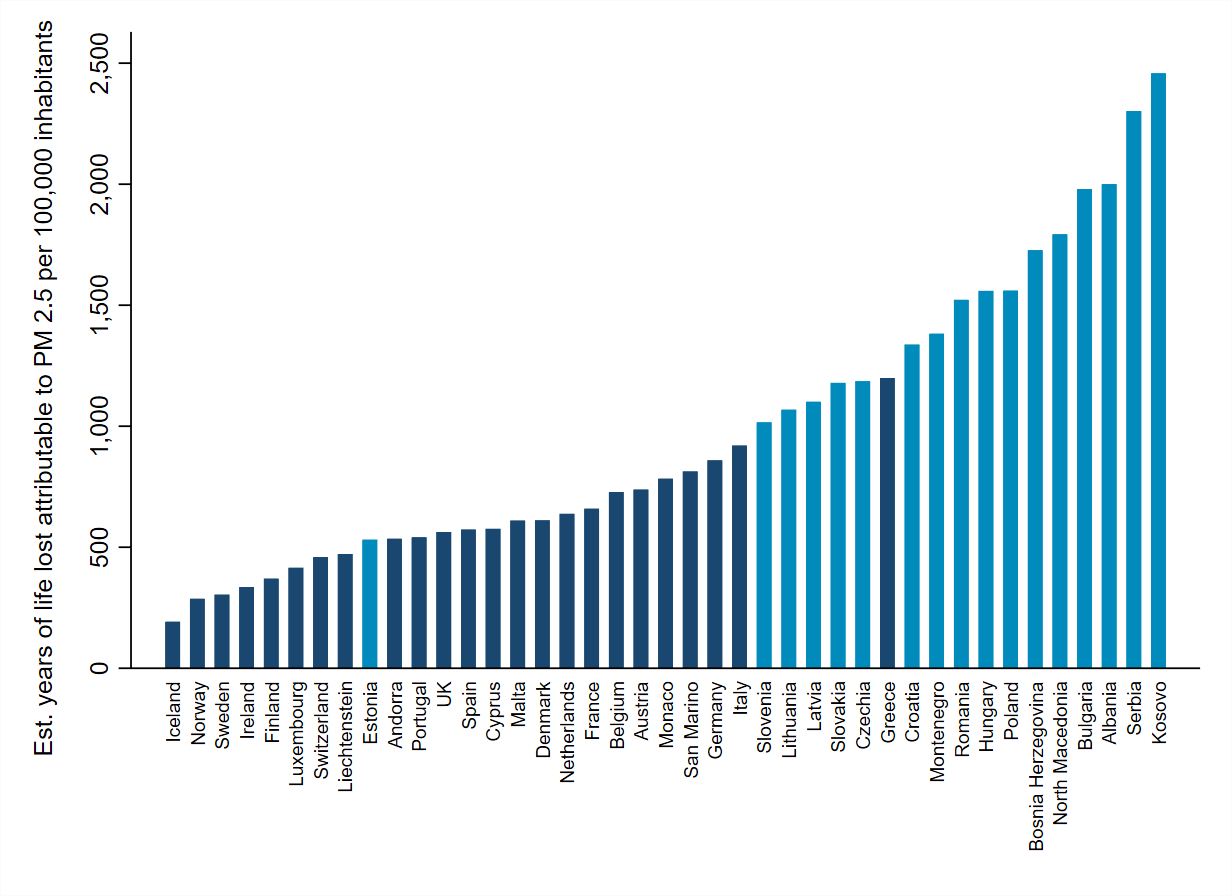 A number of factors contribute to the pattern of pollution shown on Map 1, not all of which are under policymakers’ direct control. For example, two of the cities on the map with the unhealthiest air – Sarajevo and Skopje – are surrounded by mountains that prevent emissions from dissipating.

In addition to immutable geographic factors, policies elsewhere may also be contributing to pollution in the region. Stricter regulations in Western Europe can have adverse effects if they result in polluting industries migrating eastwards. Bagayev and Lochard (2017) show that as EU countries adopt new air pollution regulations, the share of their imports from Eastern Europe and Central Asia in pollution-intensive sectors increases. Stricter rules can also result in outdated technology being exported to other countries. A Transport & Environment report found that over 30,000 high-emission diesel cars were exported from Western Europe to Bulgaria in 2017 and argued that such flows will continue as Western European cities impose Low Emission Zones and diesel bans (Transport & Environment 2018).

Power generation, and in particular coal power, is likely to be the single most important determinant of the gap in air quality between Eastern and Western European cities. Coal power accounts for over 60% of electricity production in Poland, Serbia, Bosnia Herzegovina, and North Macedonia, and remains an important energy source in the majority of Eastern European countries (BP 2020). Many of the coal power plants in the region have been operating for decades and are not equipped with modern desulphurisation technology that would help to reduce their emissions. A report by the Health and Environment Alliance found that 16 coal power plants in the Western Balkans collectively produce more emissions than the 250 power plants in the European Union, while only being able to generate 6% of the power (Matkovic Puljic et al. 2019).

Countries in the region are taking steps to reduce their dependence on coal power. In September 2020, the Polish government struck an agreement with labour unions that would see coal phased out by 2049. Coal accounts for 75% of Poland’s current electricity and Map 1 shows that air in the Upper Silesian Coal Basin, in the south of the country, is particularly polluted. Despite such commitments, Western European countries have in recent years been faster at transitioning away from coal. If this trend continues, the gap in air quality may even increase in the short run.

Last spring, a number of headlines from around the world featured the phrase “A breath of fresh air” (e.g. Reuters, The Economic Times, EUIdeas). These articles described measurable improvements in air quality in cities with government-mandated lockdowns. Recent academic publications have confirmed these reports in a variety of settings including the US (Berman and Ebisu 2020), China (Chen et al. 2020), and Korea (Ju et al. 2020).

While Eastern Europe was less affected by the initial wave of COVID-19 than Western Europe, most countries imposed lockdowns and social distancing measures that can be expected to have affected air quality. Figure 2 uses daily data from the World Air Quality Index for 221 European cities to compare average air pollution in 2020 to 2019. Overall, these plots suggest that air quality did improve in Eastern European cities relative to the previous year. However, not all types of pollutants declined and the declines are slightly smaller on average than in Western European cities. Panels A, B, and C plot air quality indices for fine particulate matter (PM 2.5), nitrogen dioxide (NO2), and sulfur dioxide (SO2) respectively. Dots below the line represent cities where the average air quality index was lower (indicating less pollution) in 2020 than in 2019. The declines are largest for NO2 – a gas that is formed when fuel is burned. The reduction in traffic and transportation in all European cities is likely to have contributed to this drop. By contrast, there were no statistically significant declines in SO2. This may be due to the fact that power generation, which is the source of most SO2 emissions, was less affected by lockdowns than transportation. 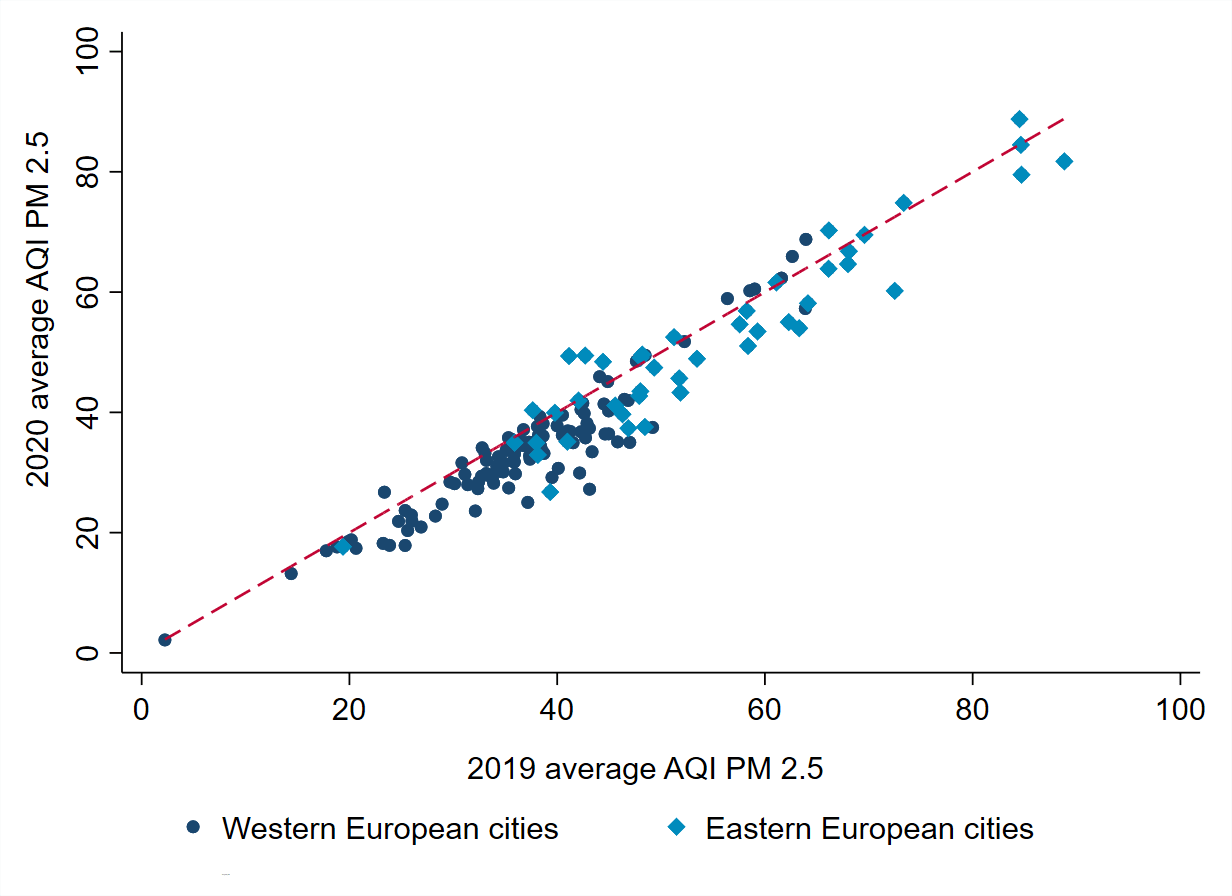 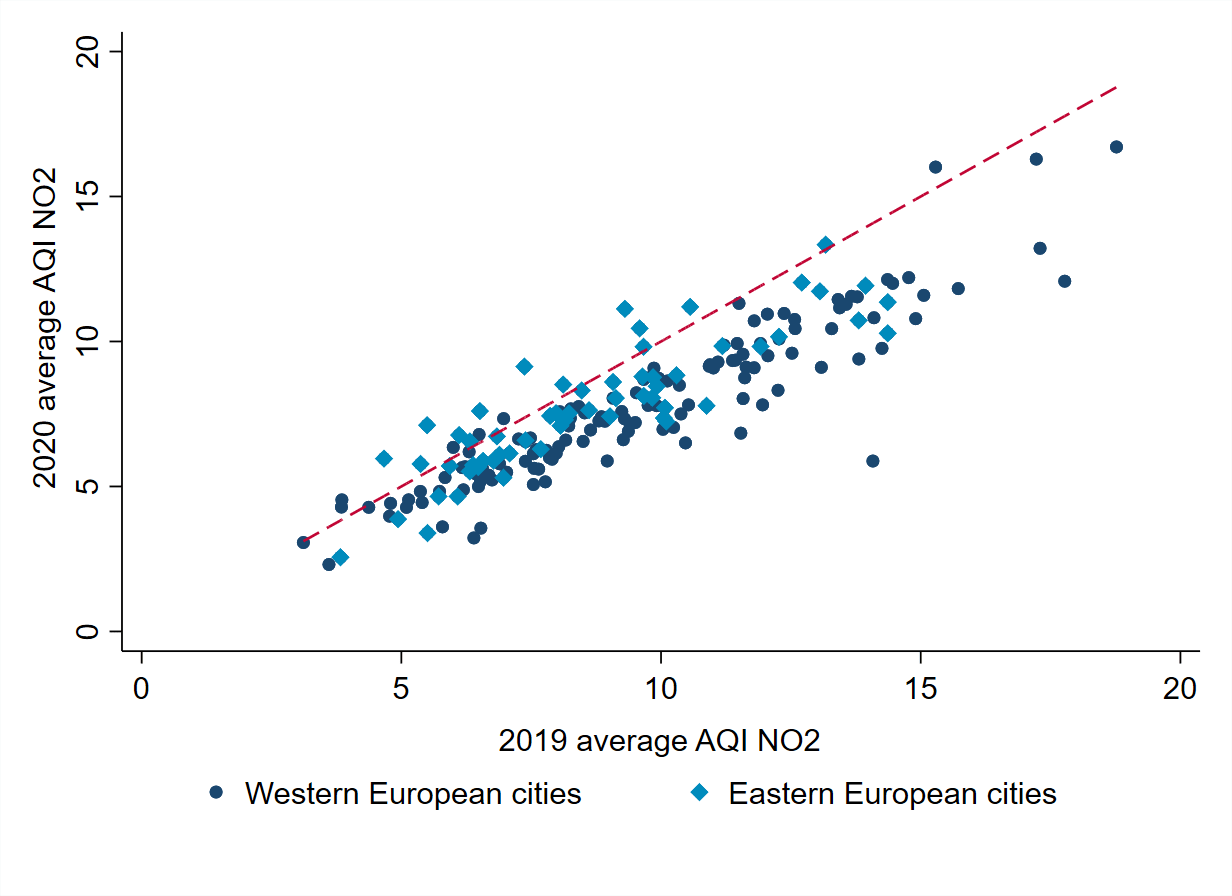 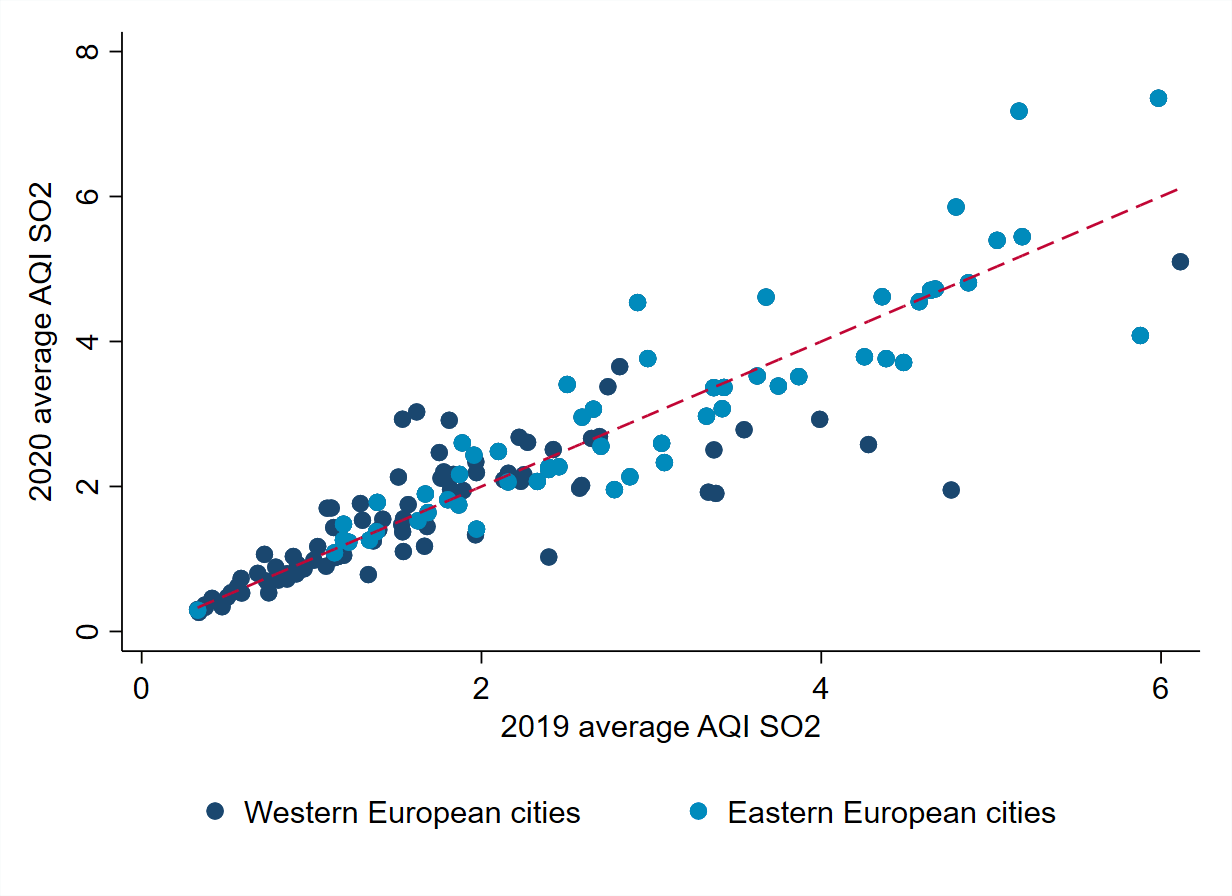 Source: Author’s calculations based on the World Air Quality Index COVID-19 dataset. Each marker represents a city. Markers below the 45-degree line represent cities where emissions for the respective category of pollutant were lower in 2020 than in 2019. For reasons of presentation, outliers were excluded from panels B and C.

The variation in COVID-19 prevalence over the course of 2020 is visible when tracking pollution over time. Figure 3 shows that average daily NO2 emissions in Western European cities dropped most from March to June of 2020, during the first wave of the pandemic. NO2 levels were comparable to the previous year in July and August when case numbers fell and restrictions were lifted. In the last months of the year, as the second wave hit, NO2 emissions once more dropped below the previous year’s average. This pattern is similar for Eastern European cities but the decline in NO2 in the first half of the year is less pronounced. 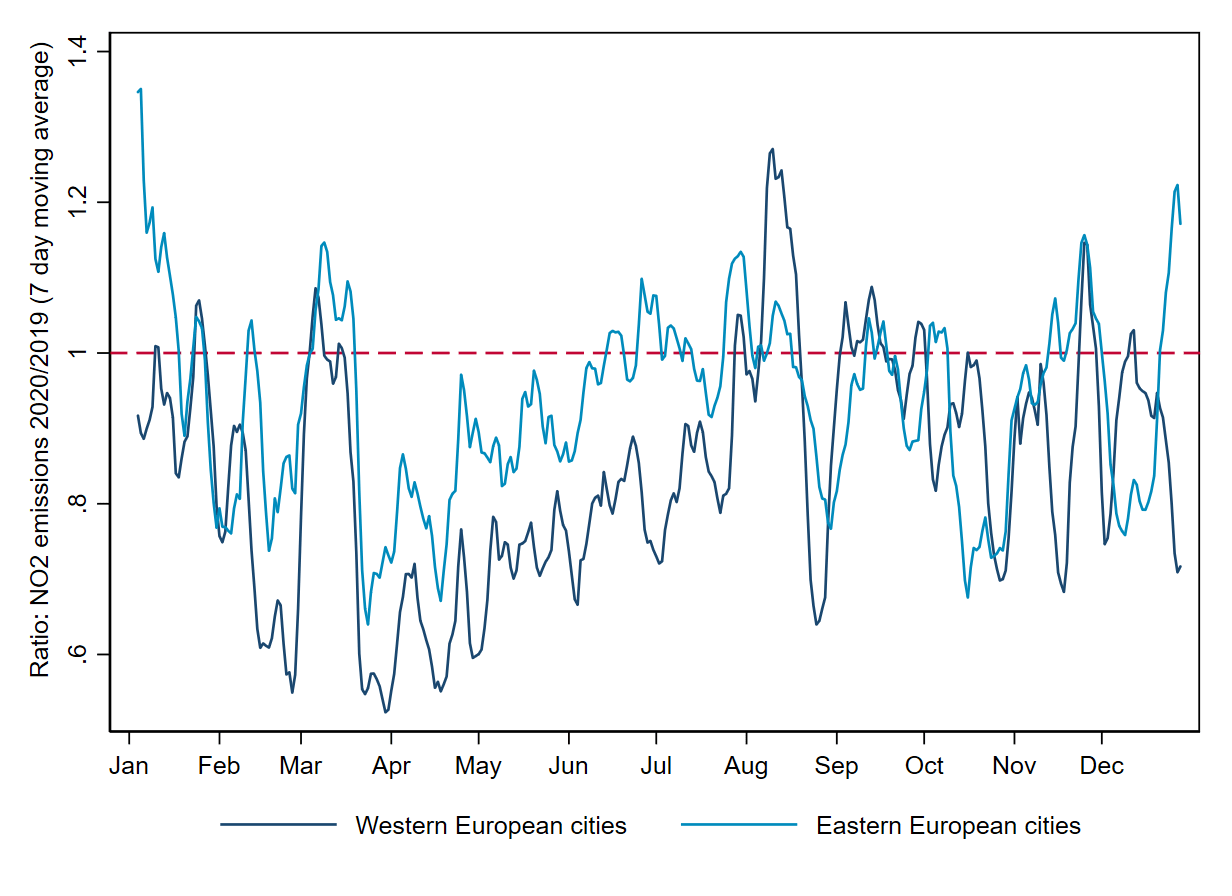 Source: Author’s calculations based on the World Air Quality Index COVID-19 dataset. Lines show the seven day moving average of the ratio between average NO2 emissions in 2020 and 2019.

The COVID-19 epidemic has highlighted the health costs of air pollution. The preliminary evidence suggests that long-term exposure to pollution increased COVID-19 mortality rates (Cole et al. 2020, Wu et al. 2020). This is a particular concern for countries across Eastern Europe which – at the time of writing – are still grappling with the second wave of the pandemic in Europe. Many people in this region have been exposed to polluted air for decades.

The pandemic has also demonstrated that air quality can improve relatively quickly when human behaviour changes. The data described in this brief suggest that Eastern Europe was no exception in this regard, although the declines were confined to some categories of pollutants. Achieving a more general, and sustained improvement in air quality will require a shift from coal power towards cleaner forms of energy.

Stimulus packages aimed at a post-pandemic economic recovery can provide an opportunity for policy to reorient the economy and accelerate such a shift. The consultancy Vivid Economics, which rated G20 member countries’ proposed stimulus packages in terms of their environmental impact, found that the ‘greenest’ stimulus proposals are those of the European Commission, France, UK, and Germany. Russia is one of the worst performers on this index (Vivid Economics 2020). Whether governments in Eastern Europe are able to take advantage of this opportunity will depend on their respective fiscal space and whether they make improving air quality a priority.

Disclaimer: Opinions expressed in policy briefs and other publications are those of the authors; they do not necessarily reflect those of SITE, the FREE Network, SITE and its research institutes.

What does the gas crisis reveal about European energy security?

The energy and climate crisis facing Europe: How to strike the right balance