Policy brief: Why is the IMF sending $1bn to Belarus as the country is falling deeper into repression and authoritarianism? The answer might not be what you expect.

The short answer is that Belarus, together with 189 other countries, is a member of the IMF and the institution has decided to make a $650bn allocation of SDRs to its members in proportion to their quotas in the IMF. Belarus has a quota of 0.14 and will thus receive an injection of around $1bn to its reserves. In other words, this is not a decision to support the Belarus government as such but a general decision by the IMF members to support a global recovery after the Covid-19 pandemic. That said, it still means that the leaders of Belarus are given an asset worth $1bn that can be used without conditions, but the underlying reason to support the recovery in low- and middle-income countries still makes this palatable.

On August 2, 2021, the board of the IMF approved the largest-ever SDR allocation to its 190 member countries. Belarus is one of the members that, by this decision, will get a boost of reserve assets of almost $1 billion. This has raised the question in some circles of “why is the IMF giving money to Belarus”. This brief provides a short background on IMF SDR allocations; how this may be used by the autocratic regime of Belarus; and why the general SDR allocation still makes sense.

For most people, an IMF “SDR allocation” is just another mysterious acronym that means very little. Therefore, a short introduction to the concept is warranted. SDR is short for Special Drawing Rights and is the IMF’s own reserve asset and unit of account, with a value that was first linked to gold but is now based on a basket of other currencies (IMF 2021). More specifically, the value of the SDR is based on a basket that consists of the U.S. dollar, euro, yen, pound sterling, and Chinese renminbi (since 2016). Table 1 shows the amounts of each currency and the value of the SDR based on exchange rates for August 26, 2021. In short, on that date, 1 SDR was worth approximately 1.42 U.S. dollars. Since the cross-exchange rates in the basket vary over time, so does the value of the SDR (see Figure 1). 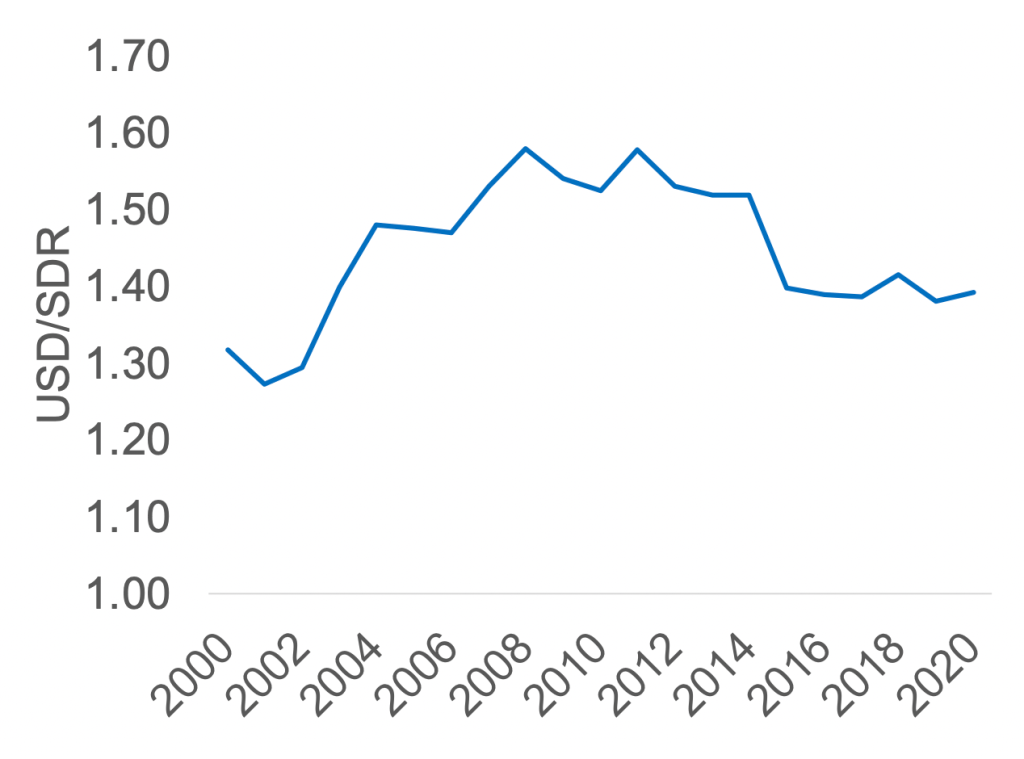 The next issue is how SDRs are allocated among the IMF members. This is determined by the IMF’s Articles of Agreement and is done to provide reserve assets to its member countries. A new SDR allocation requires an 85 percent majority in the board to pass, and SDRs are then allocated to members based on their quotas. IMF quotas, in turn, are basically the stake the different member countries have in the Fund and are roughly based on the size of the economy of the country relative to other members.  Since several countries joined the IMF after the general SDR allocations in 1981, a special allocation was done in 2009 to allow new member countries to join the SDR Department on more equal terms. There was also a large general allocation in 2009 during the global financial crisis and in 2021 in response to the COVID-19 pandemic (Figure 2). The latter one is by far the largest and given the exchange rate in Table 1, the SDR456.5 billion is equivalent to around $650 billion. 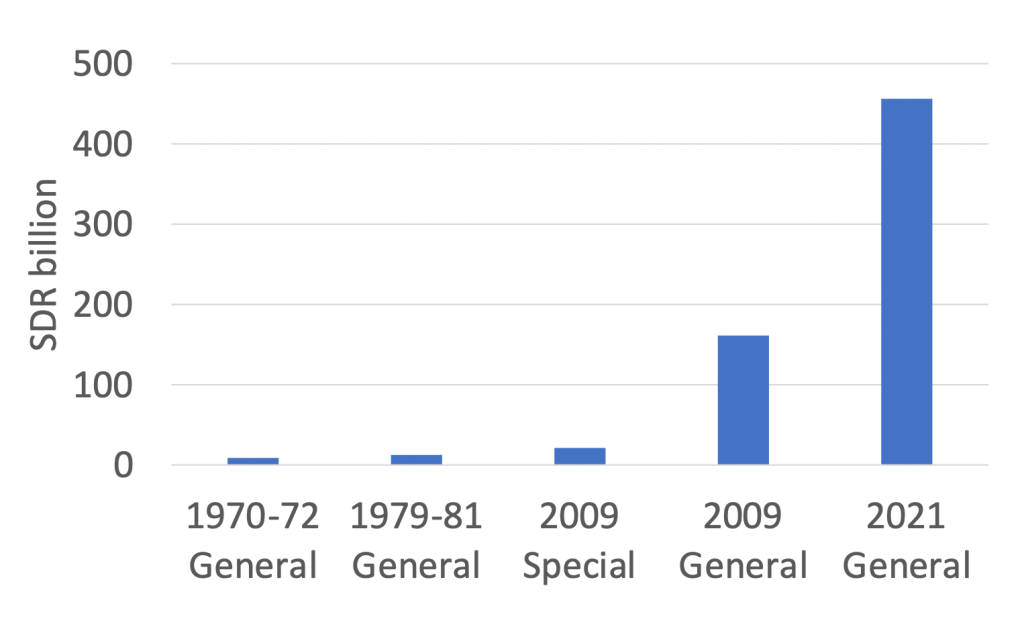 The final issue to address in this section is why the SDR allocations matter at all. The answer is that SDRs can be exchanged for other currencies that, in turn, can be used to buy goods and services in international markets, including vaccines, other medical equipment, services, or food. When countries use the SDRs in this way, there is a cost in terms of the interest rate countries pay on SDRs. However, this interest rate is very low compared to other types of borrowing, so it is a cheap way of getting more foreign currency to spend (see Figure 3). In other words, for countries lacking access to foreign exchange at reasonable costs, the SDR allocation is a very welcome addition to their spending power. 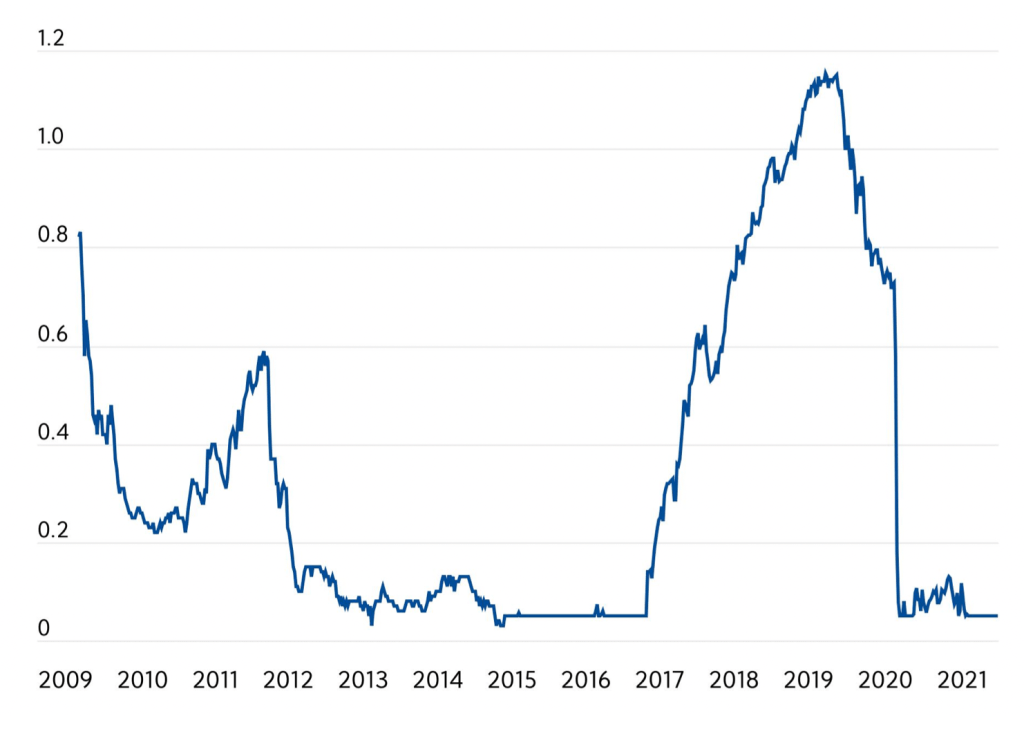 Belarus and the IMF

Belarus became a member of the IMF in July 1992, shortly after the dissolution of the Soviet Union. Its quota in the IMF is SDR 681.5 million (or a share of 0.14 percent of total).

Despite the need for reforms and external funding, Belarus could not reach an agreement with the IMF on continued funding and instead repaid the loans to the Fund between 2012 and 2015. At the heart of this was the fact that for a country to get financial support in a regular Fund program, conditions will apply and will not always be stated explicitly, including on how to deal with human rights issues that are outside the Fund’s mandate. Therefore, the previous money from the Fund to Belarus was fundamentally different from the general SDR allocation described here, which is money without strings attached.

As the Covid-19 pandemic hit economies across the globe, Belarus approached the Fund in March 2020 to seek financial assistance. According to various reports, Belarus could not reach an agreement with the IMF due to conditions on how the pandemic was to be handled (IMF, 2020).

The new SDR allocation is however NOT subject to any conditionality but distributed to IMF members in proportion to their quotas. For Belarus, this means a new SDR allocation of 0.14 percent of the total SDR 456.5 billion, equivalent to around $900 million. As explained above, the SDR allocation can be exchanged for dollars, euros, or other currencies that can then be used to buy whatever the regime in Belarus likes. It could be vaccines, food, and medical equipment, but it could also be guns, ammunition, or tear gas to the security forces. In other words, this is money that can be spent in any way the government decides and the only price for this is a very small interest charge (see Figure 3) that comes with not keeping the SDRs as a reserve asset.

The IMF is a member institution with 190 countries that is governed by its Articles of Agreement. This dictates that a new general SDR allocation should be distributed to its members according to their quotas. New SDR allocations are rare but have been used before to handle global economic crises. The current SDR allocation is designed to help low- and middle-income countries to deal with the economic side of the Covid-19 by making more foreign exchange available at a low cost. Helping countries with limited reserves to deal with the crisis and ensure that they can secure imports of vital goods and services makes perfect sense. The fact that this general support in certain instances will go to regimes like the one in Belarus that we currently think do not warrant the support of the global community is unfortunate. In a perfect world, the IMF would be able to impose conditions on human rights and democracy for any type of financial support, but this is not the world we live in. Therefore, the conclusion is not to stop helping a global recovery but to do more to support the alternatives to autocratic regimes across the world with other instruments.

What has happened to the Russian economy since 2000?