Policy brief: A common presumption in economics is that a carbon tax is regressive – that the tax disproportionately burdens low-income households. However, this presumption originates from early research on carbon taxes that used US data, and little is known about the factors that determine the level of regressivity of carbon taxation across countries.

Climate change is one of the main challenges facing us today. To reduce emissions of greenhouse gases, and thereby mitigate climate change, economists recommend the use of a carbon tax. The environmental and economic efficiency of carbon taxation is often highlighted, but the equity story is also of importance: who bears the burden of the tax?

How the burden from a carbon tax is shared across households is important since it affects the political acceptability of the tax. For instance, the “Yellow Vests” protests against the French carbon tax started due to concerns that the tax burden is disproportionately large on middle- and working-class households. Research in economics also shows that people prefer a progressive carbon tax (Brännlund and Persson, 2012).

In this brief, I explore what we know about the distributional effects of carbon taxes and analyze the link between carbon tax regressivity and levels of income inequality in theory and in application to Sweden as well as other European countries.

It is a common finding in the economics literature that carbon taxes are, or would be, regressive (Hassett et al., 2008; Grainger and Kolstad, 2010). However, most of the earlier literature is based on US data, and the US is unrepresentative of an average high-income country in terms of variables that are arguably important for carbon tax incidence. Compared to most countries in Europe, income in the US is high but unequally distributed, carbon dioxide emissions per capita are high, the gasoline tax rate is low, and the access to public transport is poor. If we want to understand the likely distributional effects of carbon taxes across Europe, we thus need to look beyond the US studies.

A recent study by Feindt et al. (2020) examines the consumer tax burden from a hypothetical EU-wide carbon tax. They find that the distributional effect at the EU-level is regressive, driven by the high carbon intensity of energy consumption in relatively low-income countries in Eastern Europe. At the national level, however, carbon taxation in Eastern European countries is slightly progressive due to car ownership and transport fuel being luxuries. Conversely, in high-income countries – where transport fuel is a necessity – carbon taxation is slightly regressive.

The Role of Income Inequality

In a recent paper, I, together with Giles Atkinson at the London School of Economics, present a simple model where the variation in the carbon tax burden across countries and time can be determined by two parameters: the level of income inequality and the income elasticity of demand for the taxed goods (Andersson and Atkinson, 2020). The income elasticity specifies how the demand for a good, such as gasoline, responds to a change in income. If the budget share decreases as income increase, we refer to gasoline as a necessity. If the budget share increases with income, we refer to gasoline as a luxury good. Our model predicts that rising inequality increases the regressivity of a carbon tax on necessities. Similarly, we will see a more progressive incidence if inequality increases and the taxed good is a luxury.

The income elasticities of demand, however, only provide half of the picture. To understand the degree of regressivity from carbon taxation, we also need to take into account the level of income inequality in a country. Our model predicts that a carbon tax on necessities will be more regressive in countries with relatively high levels of inequality. And increases in inequality over time may turn a proportional tax incidence into a regressive one.

To test our model’s prediction, we analyze the distributional effects of the Swedish carbon tax on transport fuel and examine previous studies of gasoline tax incidence across high-income countries.

The Swedish carbon tax was implemented in 1991 at $30 per ton of carbon dioxide and the rate was subsequently increased rather rapidly between 2000-2004. Today, in 2021, the rate is above $130 per ton; the world’s highest carbon tax rate imposed on households. The full tax rate is mainly applied to transport fuel, with around 90 percent of the revenue today coming from gasoline and diesel consumption. 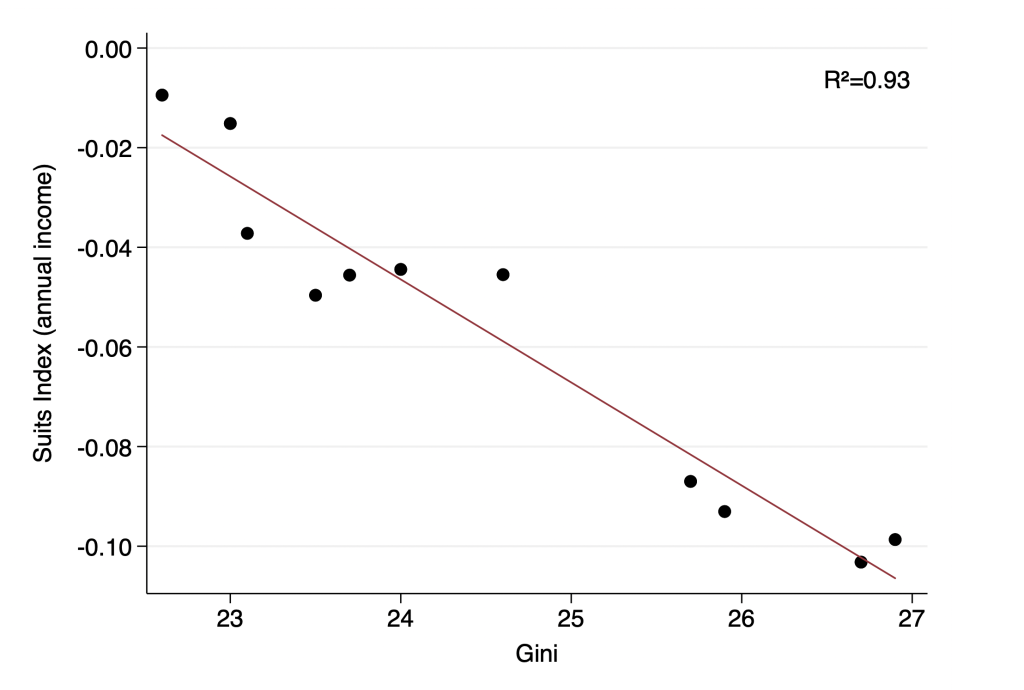 Using household-level data on transport fuel expenditures and annual income between 1999-2012, we find that the Swedish carbon tax is increasingly regressive over time, which is highly correlated with an increase in income inequality. Figure 1 shows the strong linear correlation between the incidence of the tax and the level of inequality across our sample period. The progressivity of the tax is measured using the Suits index (Suits, 1977), a summary measure of tax incidence that spans from +1 to -1. Positive (negative) numbers indicate that the tax is overall progressive (regressive) and a proportional tax is given an index of zero. The level of income inequality, in turn, is summarized by the Gini coefficient (0-100), with higher numbers indicating higher levels of inequality.

In 1991, when the Swedish carbon tax was implemented, income inequality was relatively low, with a Gini of 20.8. If we extrapolate, the results presented in Figure 1 indicate that the tax incidence in 1991 was proportional to slightly progressive. Since the early 1990s, however, Sweden has experienced a rise in inequality. Today, the Gini is around 28 and the carbon tax incidence is rather regressive. This can be a potential concern if people start to perceive the distribution of the tax burden as unfair and call for reductions in the tax rate.

Figure 2 presents the results of our analysis of previous studies of gasoline tax incidence across high-income countries. Again, we find a strong correlation with inequality; the higher the level of inequality, the more regressive are gasoline taxes.  In the bottom-right corner, we locate the results from studies on gasoline tax incidence that have used US data. The level of inequality in the US has been persistently high, and the widespread assumption that gasoline and carbon taxation is regressive is thus based to a large part on studies of one highly unequal country. Looking across Europe we find that the tax incidence is more varied, with close to a proportional outcome in the (relatively equal) Nordic countries of Denmark and Sweden. 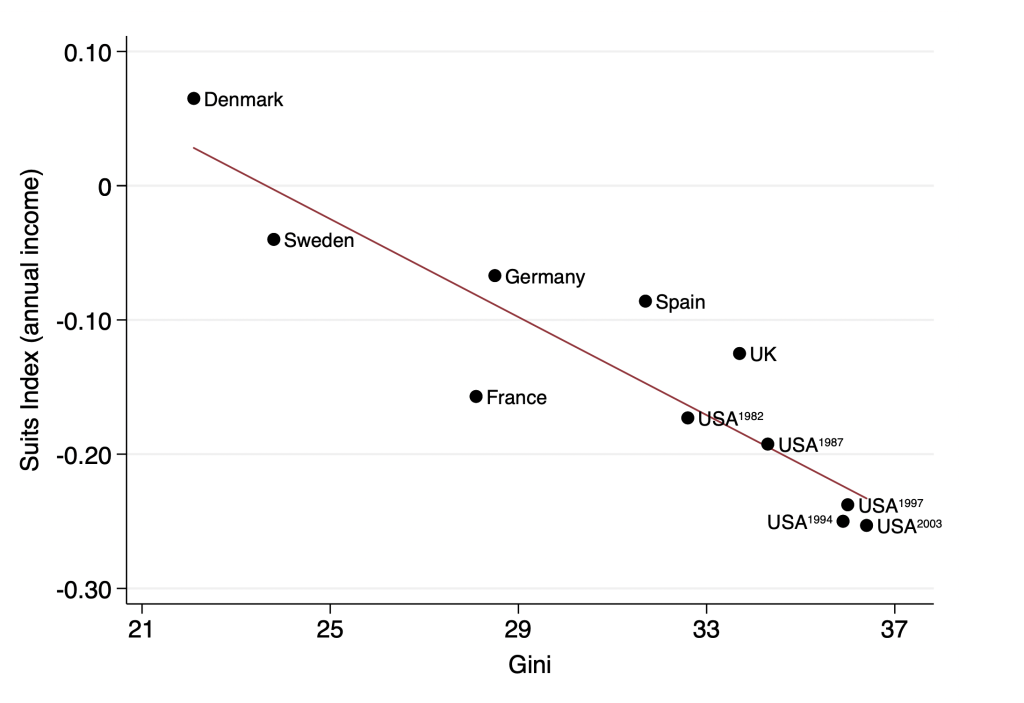 A carbon tax is economists’ preferred instrument to tackle climate change, but its distributional effect may undermine the political acceptability of the tax. This brief shows that to understand the likely distributional effects of carbon taxation we need to take into account the type of goods that are taxed – necessities or luxuries – and the level and direction of income inequality. Carbon taxation will be closer to proportional in European countries with low levels of inequality, whereas in countries with relatively high levels of inequality the carbon tax incidence will be regressive on necessities and progressive for luxury goods.

This insight may explain why we first saw the introduction of carbon taxes in the Nordic countries. Finland, Sweden, Denmark, and Norway all implemented carbon taxes between 1990-1992, and income inequality was relatively, and historically, low in this region at the time. Policymakers in the Nordic countries thus didn’t need to worry about possibly regressive effects. Looking across Europe today, many of the countries that have relatively low levels of inequality have either already implemented carbon taxes or, due to the size of their economies, have a low share of global emissions. In countries that are responsible for a larger share of global emissions – such as, the UK, Germany, and France – inequality is relatively high, and they may find it to be politically more difficult to implement carbon pricing as the equity argument becomes more salient and provides opportunities for opponents to attack the tax.

To increase the political acceptability and perceived fairness of carbon pricing, policymakers in Europe should consider a policy design that offsets regressive effects by returning the revenue back to households, either by lump-sum transfers or by reducing tax rates on labor income.

How can higher energy prices for oil and gas affect green transition?