After having been relatively mildly affected in the first wave, Eastern Europe is currently in the midst of the second wave of the COVID-19 pandemic with much higher levels of infected and dead compared to the spring. This health crisis not only has economic consequences, but also has contributed to political instability in parts of the region. Learn more on the presentations and discussions held at the SITE Development Day conference 2020!

The conference started with the Swedish Minister of International Development Cooperation, Peter Eriksson, discussing the current situation in Eastern Europe with a particular focus on the partnership with Sweden. According to Minister Eriksson, Swedish foreign policy in general, and foreign aid policy in particular, has historically paid too little attention to Eastern Europe. He has therefore emphasized that Swedish aid should be used to promote democracy and human rights in the region. As the pandemic has exacerbated global anti-democratic trends and intensified existing inequalities, international support and cooperation have become more essential than ever. Minister Eriksson mentioned several priority areas of Swedish aid policy in the region, such as the fight against corruption, economic reforms for poverty alleviation, gender equality, and media freedom. Emphasizing the importance of the latter, Minister Eriksson mentioned education for journalists and financial support for small independent media as important Swedish efforts in the region. 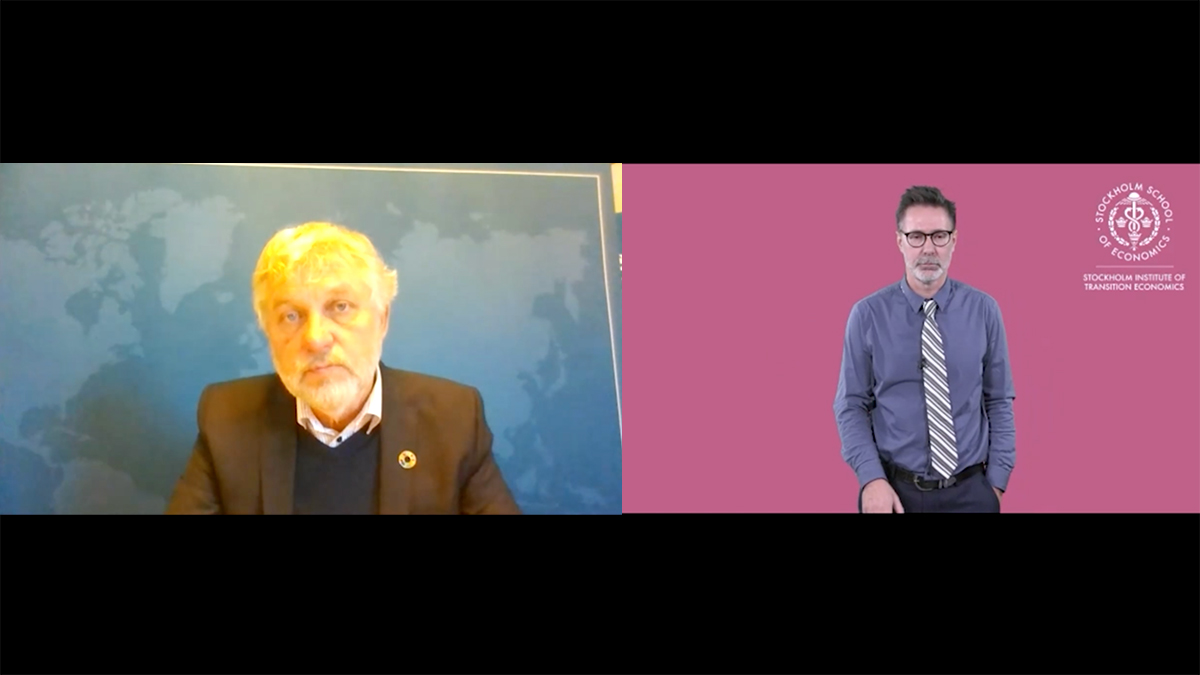 He stressed that the protection of pluralistic media is also a military security matter, as countries like Georgia and Ukraine have been targets of foreign disinformation campaigns. The importance to support democracy and civil society was also illustrated by the case of Belarus, where all ongoing projects in partnership with the state or state-affiliated organizations have been suspended. The Swedish government has successfully implemented regional projects in energy efficiency and water purification, although Minister Eriksson underlined that the need for measures to slow down climate change is intensifying. The important role of European Union membership was also mentioned. Minister Eriksson argued that the incentives created by potential EU membership have been the main drivers of democratization, modernization, and poverty reduction as well as progress towards greener economies in the region. In response to the pandemic, Sweden, as well as the European Union, have increased aid transfers to Eastern Europe. Minister Eriksson underlined, though, the need to not only support immediately affected sectors and outcomes, as the pandemic has many serious spillover effects in other areas already in need of help prior to the crisis.

The economic outlook for the region

The second section of the conference provided a current account of the economic situation in the region by two speakers from different sectors. Alexander Plekhanov, director for Transition Impact and Global Economics at the European Bank for Reconstruction and Development (EBRD), shared results from an EBRD survey on the impact of the pandemic. The survey was conducted in August and covered 8 emerging economies in Eastern Europe and 6 more advanced countries for comparison. Analysis of the survey responses shows that the impact of the crisis is very broad. The share of respondents that had lost their job was 15% in emerging economies, and almost twice as high in advanced economies. Many factors contributed to this gap. One affected area was tourism, with international tourism being particularly important in many emerging economies, and hard to replace with increased domestic tourism. The outbound relative to inbound tourism for countries like Sweden and the UK equals a factor of 3 and 2 respectively, while the corresponding in emerging economies is often below 1.

This is part of the key points and presentations that were discussed in the webinar. Read the continuation of the brief here.

Or click on this link to watch the full video from the webinar!

Economic and social context of domestic violence: Research shared at the 2022 FROGEE conference

Domestic violence – the case of Sweden during the pandemic