This year's edition of the annual Development Day conference were centred around the current political and business climate in the Eastern European region, throwing light on new developments in the past few years, strides towards and away from democracy, and the challenges as well as possible policy solutions emanating from those.

Highlights from the annual SITE conference

On November 12th, SITE with support from the Ministry for Foreign Affairs organized the annual Development Day conference. Which brought together distinguished academics, experts, development economists, and guests interested in the State of Democracy in Eastern Europe.

The conference began with Per Olsson Fridh, State Sectretary to the Ministry for International Cooperation, explaining their work in the region and the importance of progress and democracy for the future generations. The main focus of this section was the Swedish government’s new inspiring foreign policy initiative, “Drive for Democracy”. The “Drive for Democracy” specifically identifies Eastern Europe as one of the main frontiers between democracy and autocracy, and the Swedish government promotes human rights and stability through various bilateral programmes through the Swedish International Development Cooperation Agency, Sida, and multilateral initiatives within the EU, such as the Eastern Partnership. 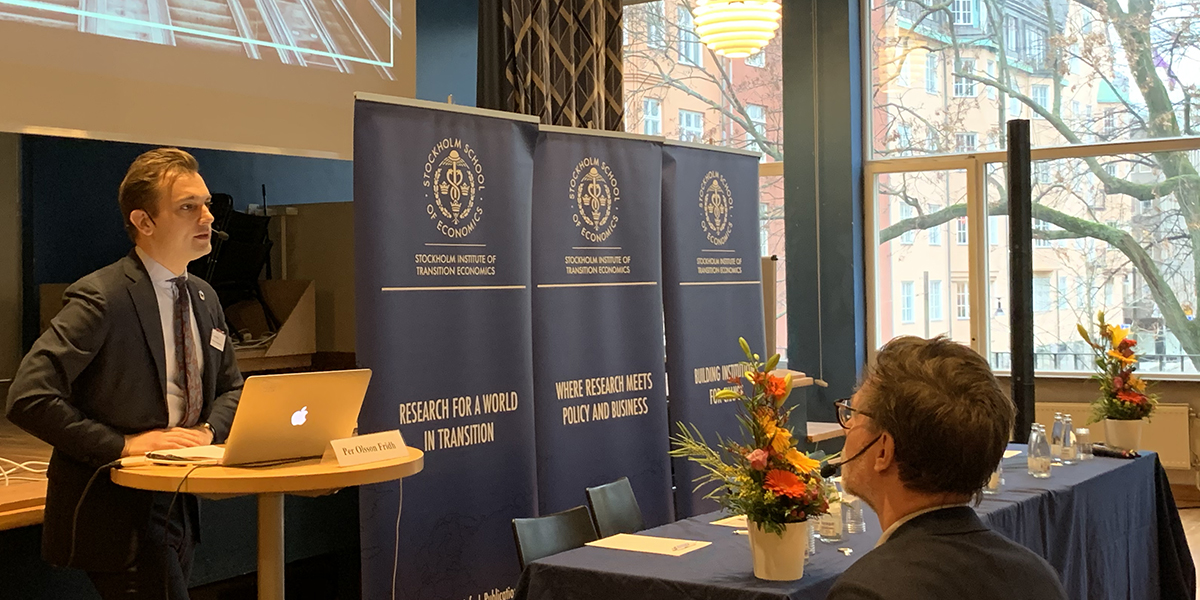 Per Olsson Fridh, "The most important thing is not for yourself but for the future generation", explaining the importance of democracy for fututre generation.

Shortly after Per Olsson Fridh's insightful presenation the first panel of speakers presented each of their research perspektive on The States of Transition in the Region, in terms of Economic Development and Governance, Political Development and Energy Security. 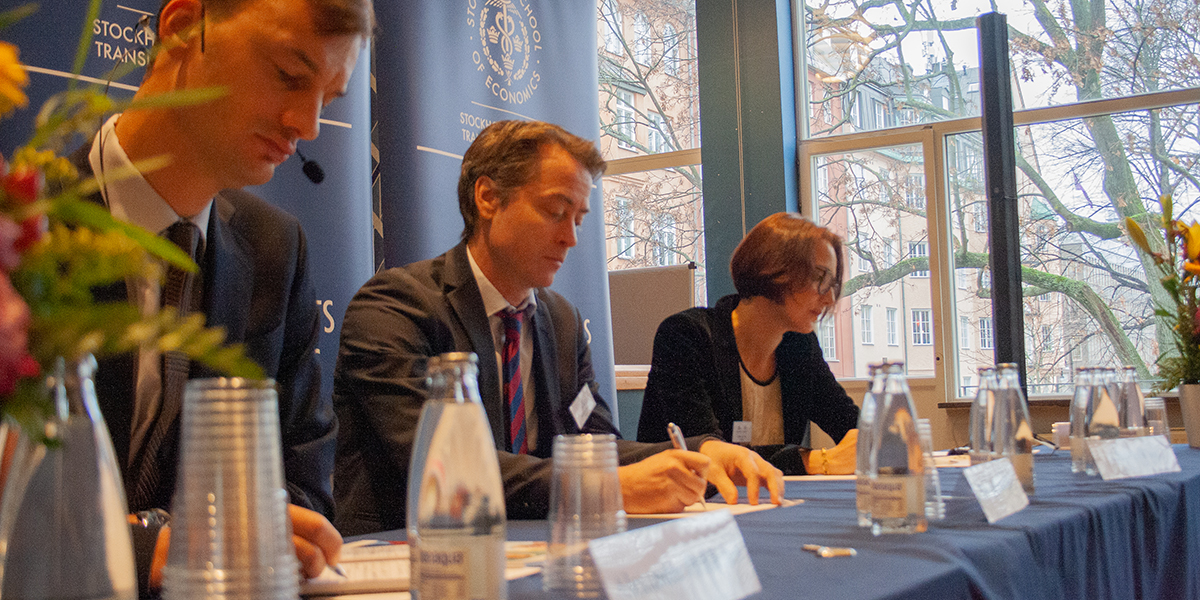 From left to right: Alexander Plekhanov, Torbjörn Becker and Chloé Le Coq during the Q & A session.

In the next part of the conference, Thomas de Waal, Senior Fellow at Carnegie Endowment for International, explained the challenges of transition and development in South Causcaus region: Armenia, Georgia and Azerbaijan. The political situation there has been characterized as a “government by day, government by night” dichotomy, implying that the real political power largely lies outside the official political institutions, according to Thomas de Waal. 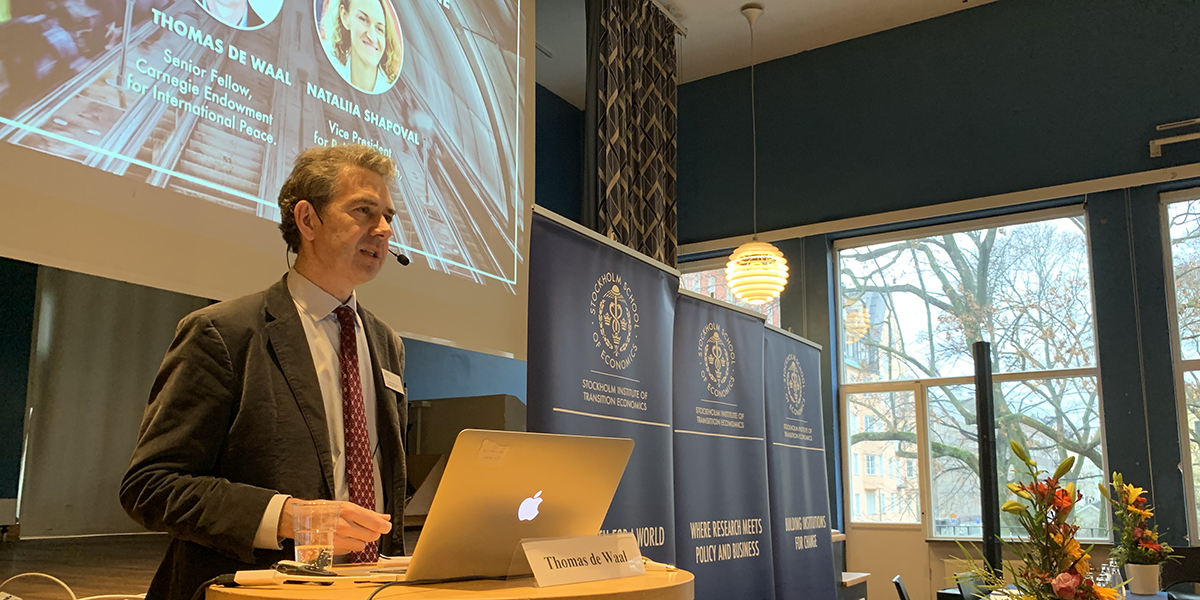 Thomas de Waal during his presentation.

In the next part of the conference session, Nataliia Shapoval, Vice President at Kyiv School of Economics, continued to elaborate on the topic of Political and Economic Developments in Ukraine. Nataliia explained how the public opinion's trust with the current government is much higher than with previous government. Natliia also illustrated the role of media, both traditional and social, for policy-making. In some countries of the region, traditional media is strictly state-controlled with obvious concerns for democracy. This is less the case in Ukraine, where also social media plays an important role in forming political opinions. The concern is that, as elsewhere, opinions that gain traction on social media may not be impartial or well informed, affecting public perception about policy-making, according to Nataliia. 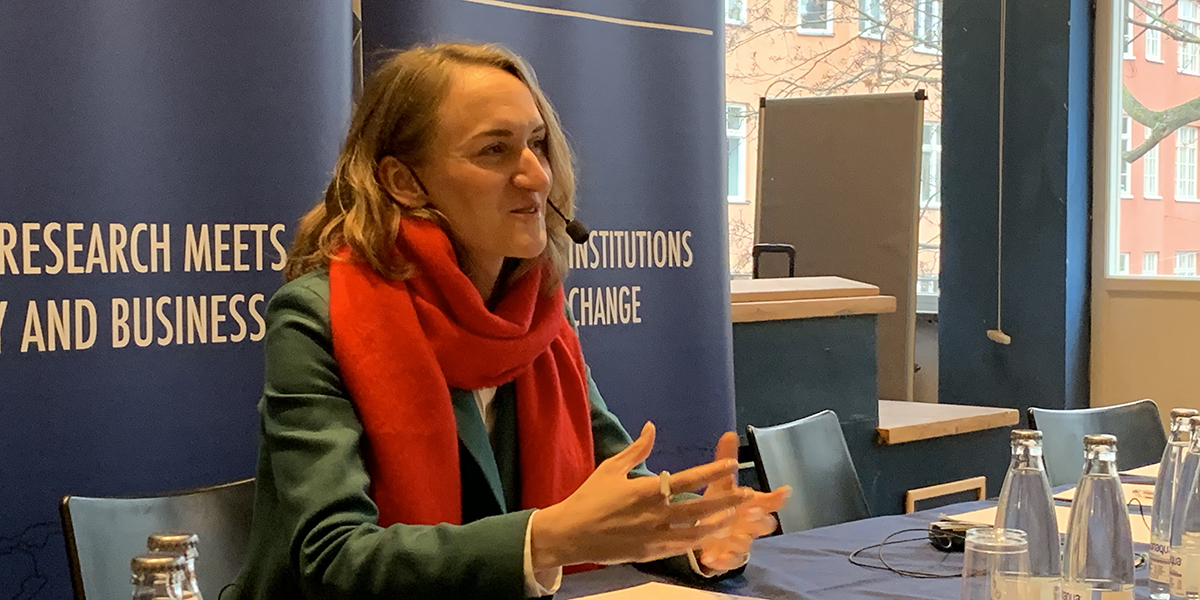 Nataliia Shapoval during the Q & A session.

In the next part of the conference session, the next panel disscussed how the democracy promotion works in practice.

Ilona Sologoub, Editor at VoxUkraine, explained the progress and main mission of VoxUkraine; "Higher standards of living via better economic decisions supported by higher quality of economic discussion in Ukraine." While, Ketevan Vashakidze, President of Europe Foundation in Georgia, explained the research statistc of the increasing level of trust towards institutions in Georgia. Furthermore, Maria Bister, Senior Policy Specialist at Sida, explained one of Sida's main stratagies for the Eastern Partnership 2020. At the end of the session, Henrik Norberg, Deputy Director at Ministry for Foreign Affairs, continued to emphasized that "democracy is a continuous process that can always be improved, as indeed experienced by Sweden". 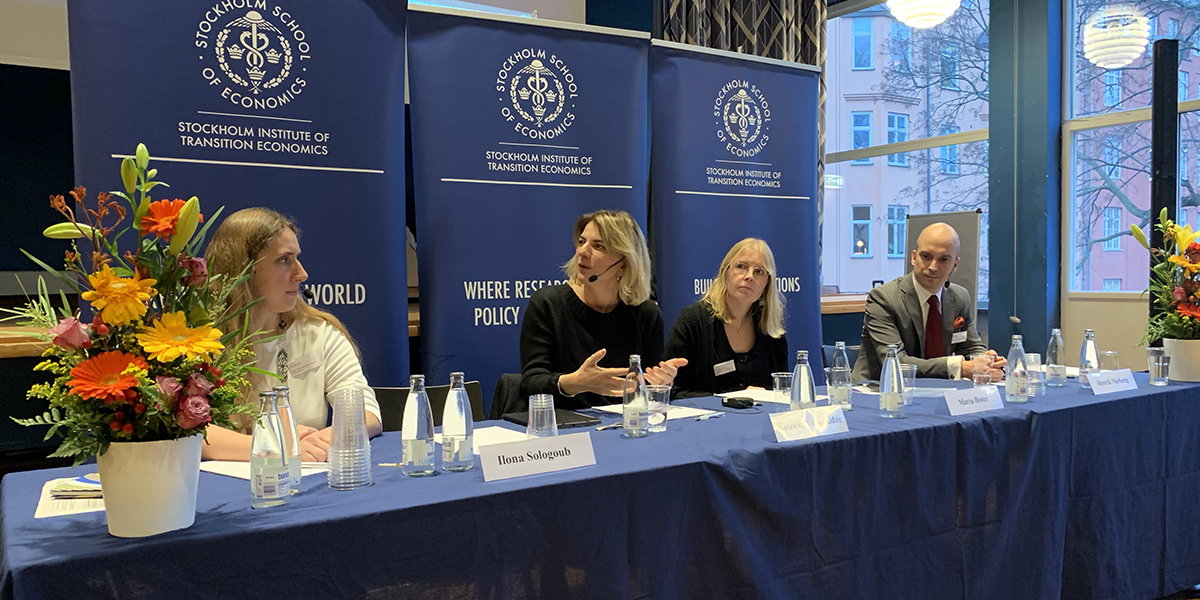 In the next part of the conference, the next panel dived right into the Business Environment in the region. 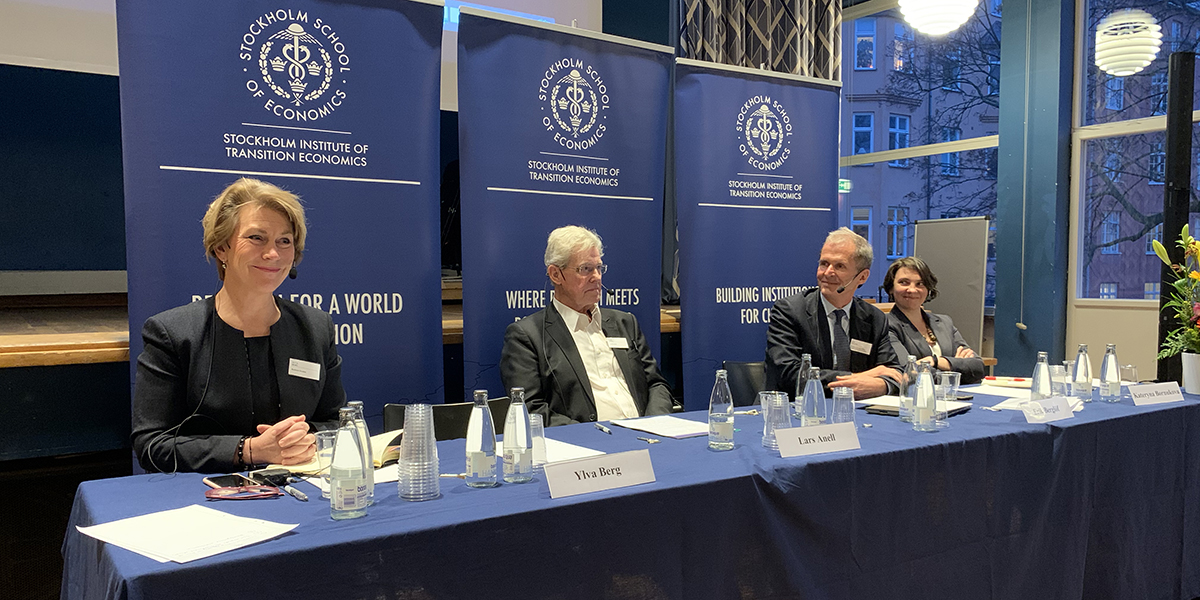 From left to right: Ylva Berg, Lars Anell, Erik Berglöf and Katryna Bornukova during the Q & A session.

Last but not least - Andrei Kolesnikov, Senior Fellow and Chair of the Russian Domestic Politics and Political Institutions Program at Carnegie Moscow Center. During the last conference session about "Who will rule Russia after 2024?", Andrei shared the likely outcome of Russia after 2024. Andrei explained that the social framework in Russia appears constellated by fears – a fear of a world war, of regime tightening and mass repressions, and of lawlessness – all of them on the rise. According to Andrei, survey data shows that trust in Putin is still over 60%, and that most people would vote for him again. However, survey data also points out that the most likely determinant of this trust is the lack of another reference figure, and that citizens are not averse to the idea of political change in itself. Lastly, Putin will most likely retain some political power after 2024, transiting “from father to grandfather of the nation”, according to Andrei. 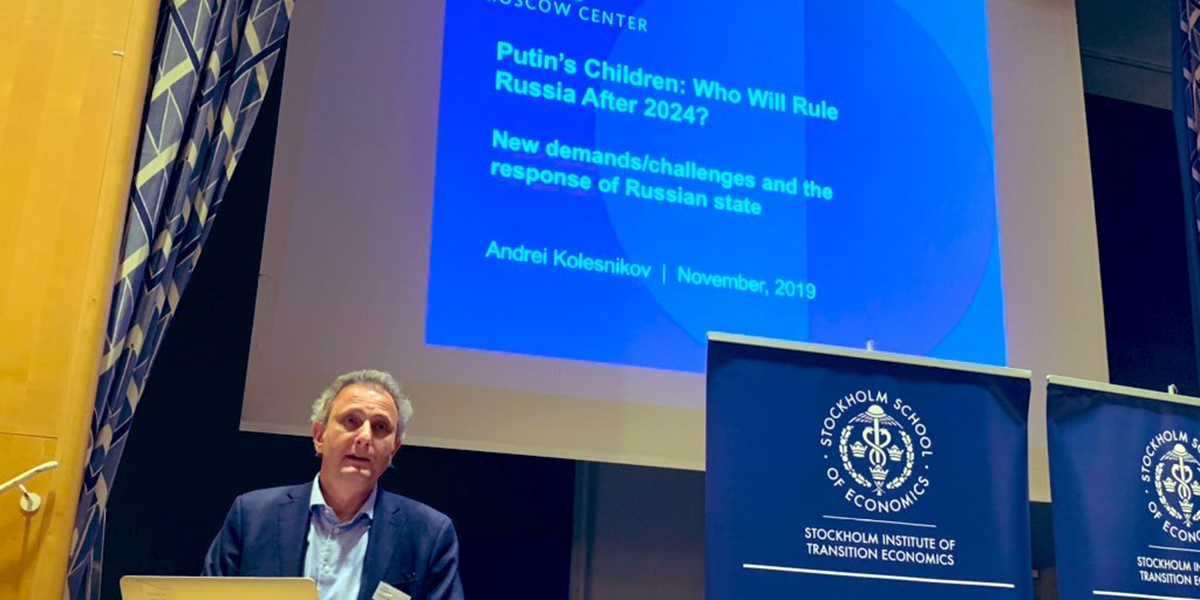 Andrei Kolesnikov during his presentation.

Main ideas and conclusions discussed during the conference are reported in the FREE Policy Brief written by Anders Olofsgård (Deputy Director at the SITE), Valentina Farinelli and Sailee Sakhardande (both Master's students at SSE).

The Costs of Political Influence: Firm-Level Evidence from Developing Countries

On the Role of Capital Gains in Top Incomes