Sweden and Norway have the highest representation of women on Executive Committees globally according to the Oliver Wyman report Women in Financial Services 2016. However, global data shows that women face a mid-career conflict and are 20 to 30 percent more likely to leave their employer than their peers in other industries. 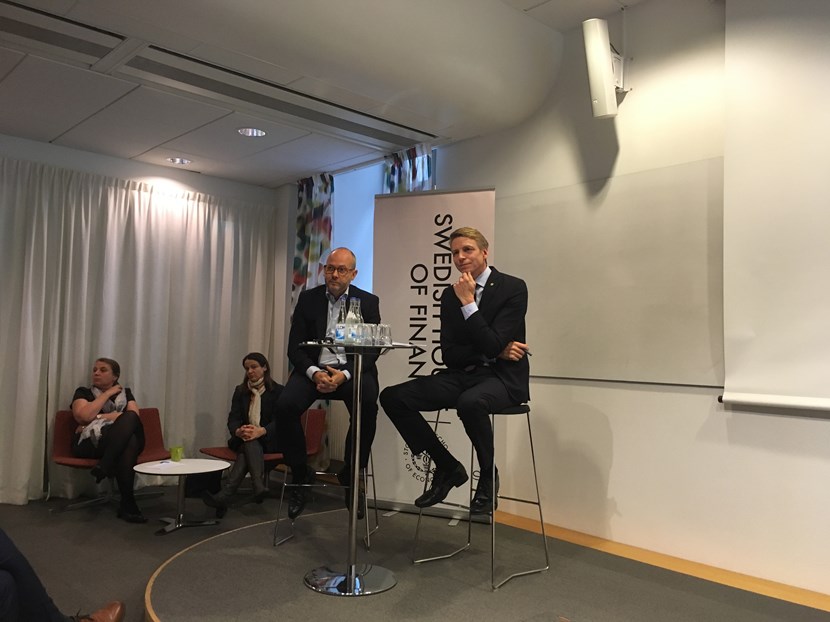 The report showed that women are just as ambitious as men when they enter the financial services industry. 58 percent of women and 59 percent of men state a desire to reach a senior position in their organization. For some reason along the way, women’s ambitions are lowered and between the ages of 30 and 50 the work-life balance seems to be particularly difficult for women who end up voting with their feet.

The state of women in financial services was discussed during the Women in Finance Day at Swedish House of Finance on 18 October. Astrid Jäkel, lead author of the report presented conclusions, research on the area from the Swedish House of Finance and Stockholm School of Economics was discussed and a panel discussion with Martin Andersson and Per Bolund amongst others concluded the day.

Also presenting during the day was Kajsa Asplund and Pernilla Bolander, both PhD-students at the Stockholm School of Economics who are just now initiating a study of how HR-functions creates opportunities or work against women’s advancement within the financial industry. The study will be performed during the next two years and include case studies from Swedish companies in the financial industry,

Start at the bottom

The both researchers have also recently concluded a study of how the Stockholm School of Economics and Swedish House of Finance can contribute to stimulate more women to choose Finance at the Master-level in their education.

A number of actions were identified as possibly contributing to getting more women to choose finance and many of the ideas have already been implemented. Having more female students choosing finance should after a while lead to a broader pipeline of candidates in the finance sector. Ultimately this could contribute to changes in workplace practices and societal norms about women working in finance.

Has Sweden hit a ceiling?

Sweden is classified in the “hitting a ceiling-category” in the Oliver Wyman-report meaning that the level of female members on Executive Committees is high but that the growth rate is slow. The reason for this is hard to know but the authors of the report suggest that it could have something to do with a decreased sense of urgency as companies have reached a target of 30 percent. There could also be an insufficient number of women in the pipeline for Executive Committees. Whatever the reason, the forthcoming study by Kajsa Asplund and Pernilla Bolander will contribute with one important piece of the puzzle.