Policy brief: There are great expectations that vaccinations will enable a return to normality from COVID-19. However, there is massive variation in vaccination efforts, vaccine access, and attitudes to vaccination in the population across countries. This policy brief compares the situation in a number of countries in Eastern Europe, the Baltics, the Caucasus region, and Sweden. The brief is based on the insights shared at a recent webinar “Addressing the COVID-19 pandemic: Vaccination efforts in FREE Network countries” organized by the Stockholm Institute of Transition Economics.

"Eastern Europe is no exception"

As of February 16, 2021, the total number of confirmed COVID-19 deaths across the globe has reached 2.45 million according to Our World in Data (2021).  Rapid implementation of vaccination programs that extend to major parts of the population is of paramount importance, not only from a global health perspective, but also in terms of economic, political, and social implications.

Eastern Europe is no exception. Although many countries in the region had a relatively low level of infections during the first wave of the COVID-19 pandemic in the spring of 2020, all have by now been severely affected. Vaccination plays a key role for these economies to bounce back, especially as many of them depend on tourism, trade, and other sectors that have been particularly hurt by social distancing restrictions. 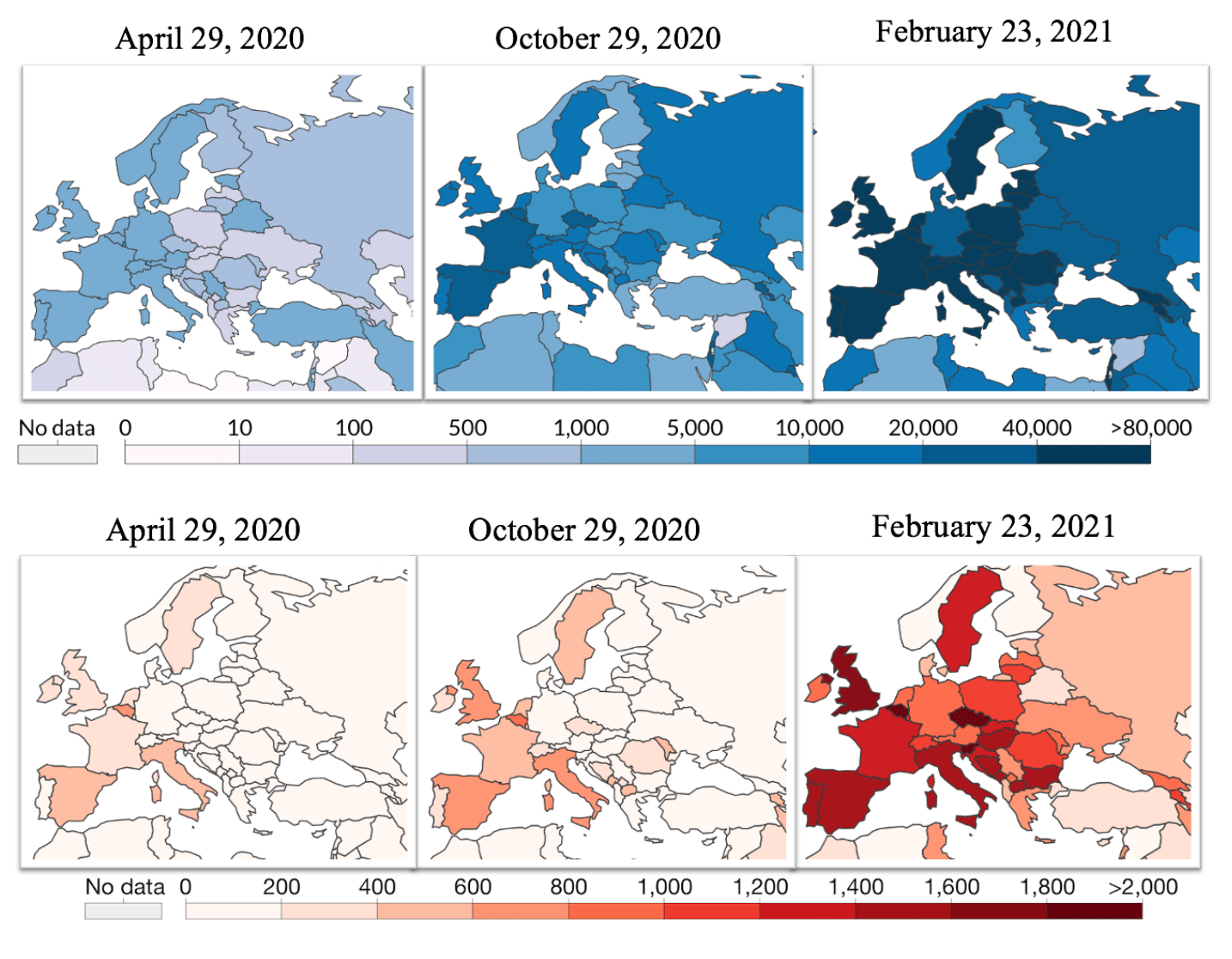 Against this background, the Stockholm Institute of Transition Economics invited representatives of the FREE Network countries to discuss the current vaccination efforts happening in Eastern Europe, the Baltics, and the Caucasus (the represented countries were Belarus, Georgia, Latvia, Poland, Russia, Sweden, and Ukraine). This brief summarizes the main points raised in this event.

In Latvia, Poland, and Sweden, the second wave of infections started to pick up in November 2020 and peaked according to most COVID-19 impact measures in early 2021. As all three countries are members of the EU and take part in its coordinated efforts, they have all received vaccines from the same suppliers (i.e. Astra/Zeneca, Moderna, and Pfizer/BioNTech).

Latvia had problems early on with getting the vaccination process off the ground. The health minister was blamed for the slow start since he declined orders from Pfizer/BioNTech in the early stages, and was forced to resign. As of February 16, two doses per 100 people have been distributed primarily to medical staff, social care workers, and key-state officials. 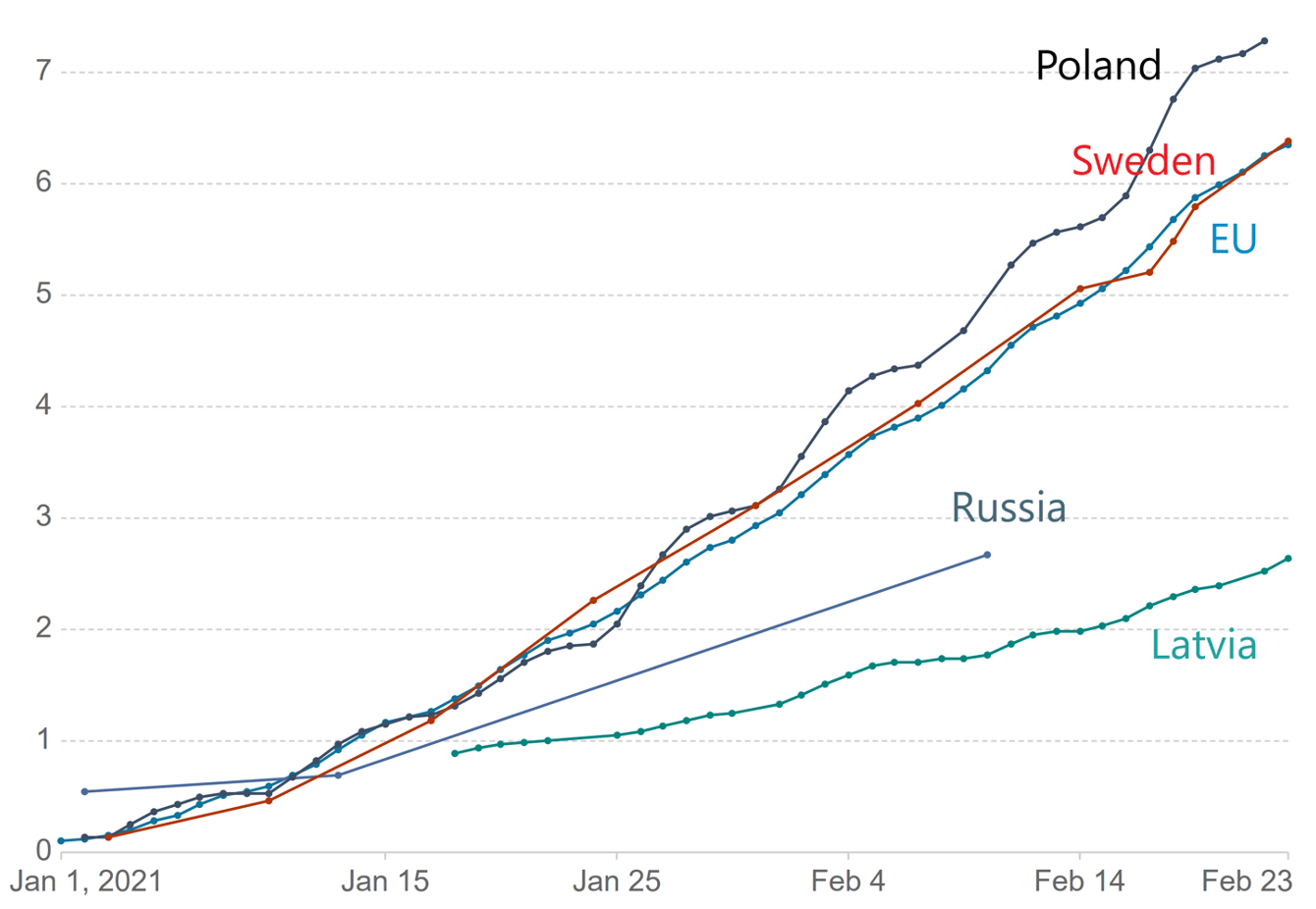 Source: Our world in data, last updated February 24th, 2021. This is counted as a single dose, and may not equal the total number of people vaccinated. Visualizations: Ourworldindata.org/coronavirus

With the first phase starting in late December, Sweden has by February 16th, 2021, fully vaccinated 1,05% of the population while experiencing serious problems with delivery and implementation. As planning and delivery of vaccines are centralized while the implementation is decided regionally, there have been some unclarities regarding who stands accountable for issues that emerge. Guidelines, issued by the Public Health Agency of Sweden, for how to prioritize different groups have been changed a couple of times. Currently, the (non-binding) recommendation is to prioritize vaccinating people living in elderly care homes, as well as personnel working with this group, followed by those above 65 years of age, health care workers, and other risk groups.

Looking at regional statistics there are significant differences in vaccinating people across regions with an average of 70% usage rate of delivered vaccines, and with lows at 40-60%, see figure 3. Reasons for this remain unclear. 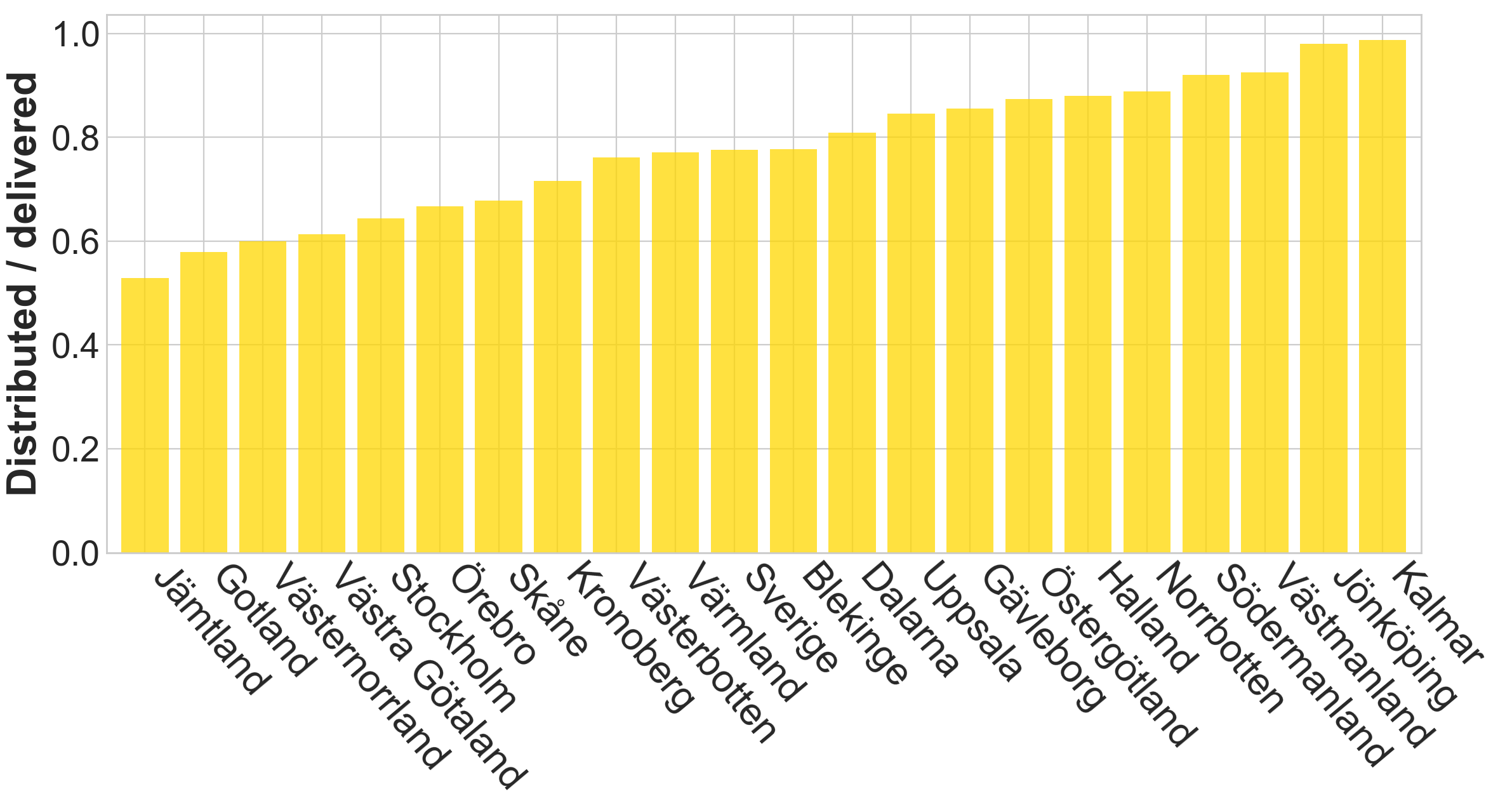 Poland has so far been somewhat more efficient than Sweden in its vaccination efforts. Despite turbulent political events over the last couple of months, it has managed to distribute 5.7 doses per 100 people. The country has just finished the first phase of the national vaccination plan, which focused on vaccinating healthcare personnel, and has now entered the second phase with a shifted focus towards elderly care homes, people above 60 years of age, military, and teachers.

Among the countries that are not members of the EU, and thus, not taking part in its coordinated vaccination efforts, the vaccination statuses are more diverse.

Russia was fast in developing and approving the Sputnik V vaccine. The country started vaccinating in early December, although only people in the age of 18-60 in prioritized occupations such as health care workers, people living and working in nursing homes, teachers, and military. At the start of 2021, the program extended to people above 60 and, on January 16, all adults were given the possibility to register themselves and get vaccinated within one week. There are no precise data at the moment, but the fraction of the population vaccinated is likely to be higher than 1%.

Others in the region have faced greater challenges in signing contracts with vaccine suppliers. Georgia and Ukraine are still waiting to secure deliveries and have not yet started to vaccinate. Being outside the EU agreements and with public and political mistrust towards Sputnik V and Russia alternatives are being explored. Georgia has ordered vaccines through the COVAX platform (co-led by Gavi, the Coalition for Epidemic Preparedness Innovations (CEPI) and WHO) but there are concerns about potential delays in deliveries. In terms of prioritizing groups once vaccinations can start, both Ukraine and Georgia have set similar priorities as other countries, with extra focus on health-care and essential workers, age-related risk groups, and people with chronic illnesses.

While Belarus’ official figures on the death toll have been widely perceived as unrealistic from the beginning, the most accurate and recent data shows an excess deaths rate of about 20% in July. The country has no precise data on vaccinations, but some reports have emerged based on interviews with government officials in the Belarusian media. These suggest that around 20,000 imported doses of Sputnik V have been distributed mainly to medical professionals and an additional 120,000-140,000 doses have been promised by Russia.

The discussion during the Q&A session at the webinar concerned the economic and political implications of vaccinations in the region.

Pavlo Kovtoniuk, the Head of Health Economics Center at KSE in Ukraine, stressed the importance of a coordinated vaccination effort in Europe with regards to geopolitics. There is a clear EU vs Non-EU divide in the vaccination status across European countries. The limited vaccine availability in Non-EU countries such as Ukraine, Georgia, and Belarus offers opportunities for more influential nations like Russia and China to pressure and affect domestic policy in these countries.

Also highlighting the fact that no one is safe until everybody is safe, Lev Lvovskiy, Senior Research Fellow at BEROC in Minsk, noted that vaccination efforts in Europe are important for recovery in small open economies like Belarus as many of its trade partners currently have imposed temporary import restrictions.

Similar to the political crisis happening alongside the pandemic in Belarus, the challenges we see in Poland – protests against the recent developments regarding abortion rights and attempts by the government to limit free media – have deflated the urgency to vaccinate in terms of its future economic and political implications, according to Michal Myck, director of CenEA in Szczecin.

Looking forward, another major challenge for the region is vaccine skepticism. Not only do many countries have to build proper infrastructure that can administer vaccines at the required scale and pace, but also make sure that people actually show up. In Latvia, Poland, Georgia, Russia, and Ukraine, polls show that less than 50% of the population are ready to vaccinate. Sergejs Gubin, Research Fellow at BICEPS in Riga, highlighted that there can be systematic variation in the willingness to vaccinate within countries as e.g. Russian-speaking natives in Latvia have been found to be less prone to vaccinate on average. Also, most of the skepticism in Georgia has been more directed towards the Chinese and Russian vaccine than towards those approved by the EU, according to Yaroslava Babych who is lead economist at ISET in Tbilisi.

Even though vaccine skepticism is an issue in Russia too, Natalya Volchkova, Director of CEFIR at New Economic School in Moscow, pointed to the positive impact of “bandwagon effects” in vaccination efforts. When one person gets vaccinated, that person can spread more accurate information about the vaccine to their social circle, resulting in fewer and fewer people being skeptical as the share of vaccinated grows. In such a scenario vaccine skepticism can fade away over time, even if initial estimates suggest it is high in the population.

Almost exactly a year has passed since Covid-19 was declared a pandemic. The economic and social consequences have been enormous. Now vaccines – developed faster than expected – promise a way out of the crisis. But major challenges, of different types and magnitudes across the globe, still remain. As the seminar highlighted, there are important differences across transition countries. Some countries (such as Russia) have secured vaccines by developing them, but still face challenges in producing and distributing vaccines. Others have secured deliveries through the joint effort by the EU, but this has also had its costs in terms of a somewhat slower process (compared to some of the countries acting on their own) and sharing within the EU. For some other countries, like Belarus, Ukraine, and Georgia, the vaccination is yet to be started. All in all, the choice and availability of vaccines across the region illustrates how economic and geopolitical questions remain important. Finally, for many of the region countries vaccine skepticism and information as well as disinformation are important determinants in distributing vaccines. Summing up, the combination of these factors once again reminds us that how to best get back from the pandemic is truly a multidisciplinary question.

Disclaimer: Opinions expressed in policy briefs and other publications are those of the authors; they do not necessarily reflect those of the FREE Network and its research institutes.