Inequality in the pandemic: Evidence from Sweden

Policy brief: Most reports on the labor-market effects of the first wave of COVID-19 have pointed to women, low-skilled workers and other vulnerable groups being more affected. Research on the topic shows a more mixed picture. Researchers from the Stockholm Institute of Transition Economics (SITE); Pamela Campa, Jesper Roine and Svante Strömberg explores the Swedish labor market during COVID-19 crisis.

To contribute into this discussion, we are using monthly official unemployment data in Sweden we find that across wage levels, occupations with lower salaries display higher increases in unemployment, and low-wage occupations are also more difficult to do from home. The job loss probability is also higher in sectors with a higher concentration of workers born outside of the EU and those aged below 30. But we find no evidence of a gender unequal impact in Sweden. Overall, our results point to higher effects for low-wage groups but small gender differences overall.

The ongoing Covid-19 pandemic has affected the health of millions of people worldwide. But it has also had an enormous impact on economic and living conditions through government policies aimed at containing the spread of the infection. While, at the onset of the pandemic, government officials, mainstream media, and even celebrities labeled COVID-19 “the great equalizer” (Mein, 2020), the reality has proven quite different, with the most vulnerable groups of the population appearing to be the most harmed by both the health and the economic crises (see, for instance, The World Economic Forum, Joseph Stiglitz in this IMF article, and The World Bank). In this brief, we focus on one specific economic impact of the pandemic, namely its effect on unemployment status, and we study the extent to which this impact has been unequal across different groups of the Swedish society. Our analysis uses administrative data and segments the population by wage, gender, age, and foreign-born status.

Covid-19 and Inequality in the Labor Market

An extensive review of the emerging literature on the effect of the pandemic on different kinds of inequality is beyond the scope of this brief. However, a number of studies are especially relevant to put our analysis in context, as they are focused on the unequal labor market impacts of the crisis and study real-time data. Based on these studies, a number of patterns emerge. First, the effect of the pandemic on the increased probability of job loss appears stronger for low-skilled workers, as proxied by education level (see e.g., Adam-Prassl et al., 2020, Gaudecker et al.  2020, Casarico and Lattanzio 2020). Gaudecker et al. (2020) also observe that in the Netherlands the negative education gradient has been mitigated by the government identifying some sectors of the economy as essential since some of these sectors are characterized by a high concentration of low-educated workers. Second, the evidence of unequal gender impacts on the probability of job loss is mixed. While survey information from the UK and the US reveals that labor market outcomes for women have more severely deteriorated during the crisis (Adams-Prassl et al., 2020), there is no evidence of unequal impacts by gender in Germany (Adams-Pras et al., 2020) and Italy (Casarico and Lattanzio, 2020). Other papers confirm that the effect on labor-market outcomes by gender varies across contexts (see, e.g.,  Hupkau and Petrongolo, 2020).

Our analysis of the Swedish labor market provides a valuable contribution to the existing findings for a number of reasons. First, despite rising inequality over the past decades, Sweden is characterized by relatively low income inequality (e.g. OECD, 2019), high participation of women in the labor market, and high level of society inclusiveness (e.g. Gottfries, 2019, OECD 2016) among OECD countries. Second, unlike the majority of countries worldwide, throughout the pandemic, Sweden has not adopted stay-at-home orders that would have separated sectors of the economy between “essential” and “non-essential”. As a result, sectors that were typically shut down in other countries, for instance, the hospitality industry, were not ordered to close during the first wave of the pandemic and have then only faced partial limitations during the second wave. Importantly, schools below the secondary level were never closed. Third, as we will describe in more detail below, the availability of administrative information on unemployment claims on a monthly basis allows studying the “real-time” development of unemployment throughout the pandemic for the universe of employees in the Swedish labor market.

We use data from the registry of unemployed individuals kept by the Swedish Public Employment Service (Arbetsförmedlingen), the government agency responsible for the functioning of the Swedish labor market. The incentives for laid-off individuals to register with the Employment Service are high since the registration is directly connected to the right to claim various (relatively generous) unemployment benefits. As such, the data arguably includes a large share of employees who lost their job over the period studied. Based on the high incentives to register as unemployed, we also assume that the probability to register does not differ the segments of the population that we consider. The data does not include some self-employed who for various reasons choose not to register, but this group is not believed to be significant. Also, furloughed workers do not count as unemployed. This group was significant, especially in the very early stages of the pandemic, but still small relative to all unemployed. As of July 2020, they represented 13% of the total pool of unemployed individuals in Sweden (Swedish Agency for Economic and Regional Growth, 2021).

The population-wide coverage is the main advantage of our data vis-à-vis the survey information used in many recent studies of the labor market throughout the pandemic (other studies using administrative data are Casarico and Lattanzi, 2020, studying the Italian labor market, and Forsythe et al., 2020, who analyze the US case).

We consider everyone registered as unemployed/seeking employment each month from January 2019 to July 2020. The data is grouped by 4-digit occupational classification (there are about 440 occupations at this level) and each occupational group is further broken down by sex, age, and foreign-born status (specifically, Sweden born, foreign EU born, and foreign non-EU born.) We then merge this data with information on the average wage by occupational group and gender in 2019, as reported by Medlingsinstitutet and publicly available at Statistics Sweden. This measure, although not being at the individual level, allows us to develop a relatively precise proxy of wages by occupation that we use to rank unemployment by wage deciles.

With the data described above, we build the following measure of the change in job-loss probability (JLP) between February and July 2020, adjusted for seasonality:

where u is the number of workers in 4-digit occupational sector who registered as unemployed in a month over the average number of employed in the same sector in 2017 and 2018 (data available at Statistics Sweden). Put it simply, ΔJLP is a sector-level indicator of the change in job loss probability due to the pandemic; it measures the change in chances of job loss between February and July 2020, i.e. between five months after the start of the pandemic and the month before its onset, as compared to the equivalent change the year before. We thus account for seasonal factors by differencing out the job loss probability during the same months of 2019, when the pandemic was neither occurring nor anticipated. Below we use ΔJLP to show differences in the impact of the pandemic on the chances of job loss for different groups of the Swedish society.

Job loss probability by wage deciles. We leverage information on sector-level average wages and the number of employees to partition occupational sectors into (approximate) wage deciles. The purpose of such a partition is to rank sectors as being typically “low-” or “high-” wage within the Swedish context. As we document in Figure 1, the pandemic has increased the probability of job loss across all sectors of the economy; however, this increase in percentage points is higher the lower is the average sector wage, with the category of least-paid workers being the most likely to lose their job. This category includes occupations such as home-based personal care and related workers, cleaners and helpers in offices, hotels and other establishments, or restaurant and kitchen helpers. Considering that the pre-pandemic probability of becoming unemployed was already largest for this group (19.7% compared to the average 6% in 2019), the existing inequality in the labor market has been exacerbated by the Covid-19 crisis. In our regression analysis that is available by request, we also find that accounting for an index of the share of tasks that can be performed from home, defined at 2-digit occupational level, does not explain away the negative and significant relationship between wages and job loss probability. Although, we confirm previous evidence that the probability of losing jobs is lower among occupations that can be performed from home. The substantial contraction in economic activity in some sectors of the economy seems to be the driver of the unequal distribution of job losses.

Figure 1. Change in job loss probability by wage decile between February and July 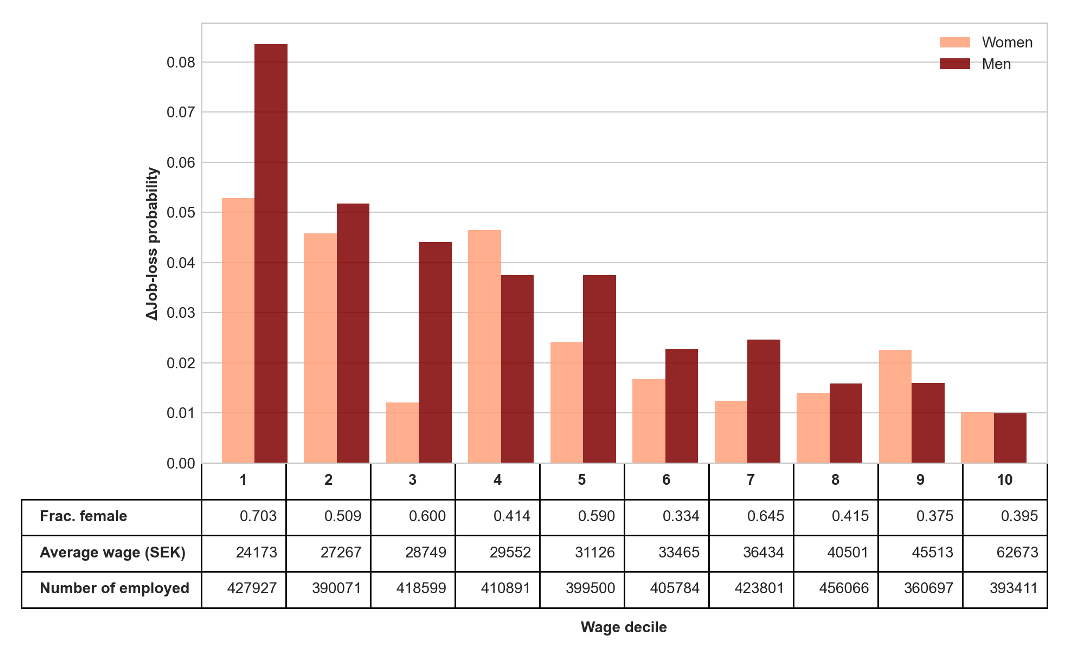 Job loss probability by foreign status and age. We find that workers who are born outside of EU countries are significantly more likely to transition into unemployment during the pandemic (see Figure 2). The difference is striking. Based on our indicator, considering male workers the pandemic has raised the probability of job loss by roughly 7 p.p. more for non-EU citizens as compared to non-Swedish EU citizens, and by 9 p.p. more compared to Swedish citizens. These differences are only slightly smaller for women. Another group particularly affected is that of workers in the age group below 30 (result available upon request). Such patterns are due to foreign-born and younger workers being more concentrated in those low-wage sectors that also appear, based on our analysis, to be more impacted by the pandemic in terms of job loss probability

Figure 2. Change in job loss probability by foreign status between February and July 2020 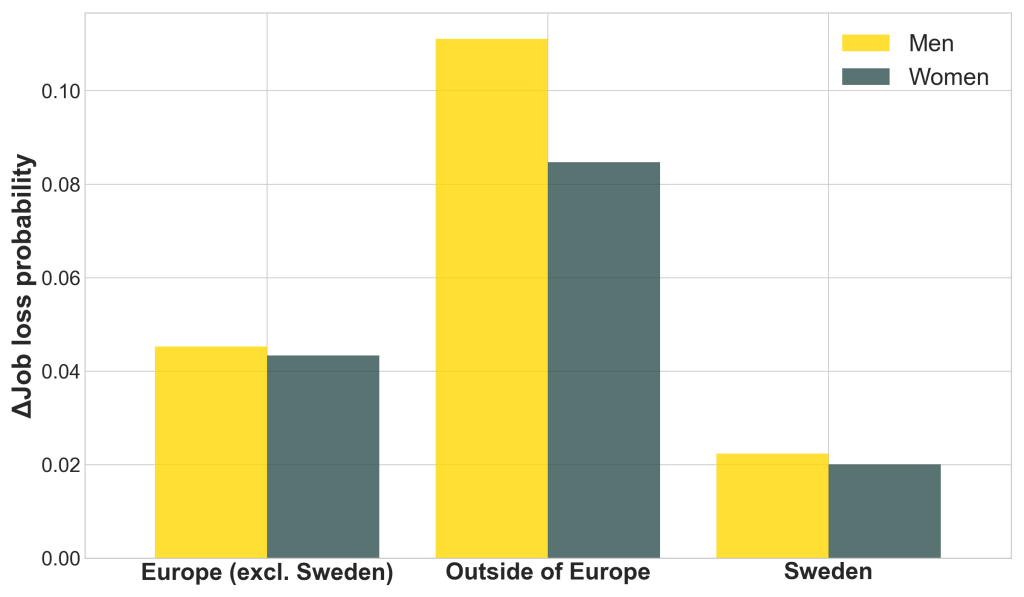 Our analysis of administrative monthly data on the number of workers who register as unemployed in Sweden confirms previous evidence that the Covid-19 crisis has not been “the great equalizer”. While the pandemic has increased the probability of losing jobs across all sectors, the most affected in Sweden are those workers in occupations where the lowest wages were paid before the pandemic. Considering other demographic characteristics, vulnerable groups that were most impacted by the crisis are workers born outside of the EU and workers aged below 30. However, we do not find evidence of a gender-unequal impact of the pandemic in terms of the probability of job loss. There may of course be many other aspects to the issue along gender lines. For example, on one hand, there might be gender-unequal effects that we cannot observe in our data, for instance in the number of hours worked, temporary unemployment, and level of stress due to increased childcare responsibility. On the other hand, since schools in Sweden stayed open throughout the pandemic, the concerns related to increased childcare responsibility, which have led to identifying mothers as most vulnerable in other countries, do not necessarily apply to the Swedish context.

Sweden has adopted a number of measures to shield workers from the worst effects of the pandemic. As the country plans the recovery, special attention should be devoted to the opportunities for re-employment for the most vulnerable groups. Absent such focus, the economy emerging from the crisis might be less inclusive and equal than it has been before the pandemic, with important consequences for many societal outcomes that are generally linked to labor market inclusiveness.

Disclaimer: Opinions expressed in policy briefs and other publications are those of the authors; they do not necessarily reflect those of SITE, the FREE Network and its research institutes.

Call for papers on dimensions of well-being

In what way did the pandemic affect our wellbeing?

The COVID-19 pandemic effects on our well-being