Åsa Carlsson was selected Female Economist of the Year 2004. On June 18, 2004, 175 guests gathered at the Confidencen Theatre at Ulriksdal for the FEOY 2004 Awards Ceremony.

Many distinguished members of both the Swedish and American business and cultural communities were present. This included the newly appointed U.S. Ambassador Bivins with wife, Robert af Jochnick, Agneta Dreber, Erik Belfrage and Stefan Grundin, to mention only a few.

Following the champagne reception in the garden, the awards ceremony commenced with a concert of traditional and modern music in Sweden's very first theatre, the "Confidencen". The setting was fitting as the theatre was originally the creation of a strong and determined woman, Queen Lovisa Ulrika, and has lately been restored and is managed by another, Kerstin Dellert. In this historical setting, Barbro Ehnbom, founder of the award, Lars Bergman, Dean of the Stockholm School of Economics, and Viveca Åhberg, top executive at Pfizer, congratulated winner Åsa Carlsson and expressed their hopes of bringing forward strong women through the scholarship. Åsa Carlsson and Sven-Olof Johansson, recipient of the Best Male Support prize, received the Orrefors Female Economist of the Year Statuettes, designed by renowned Erika Lagerbielke.

The celebratory atmosphere continued through dinner and drinks and the sounds of talk and laughter were heard well into the night. 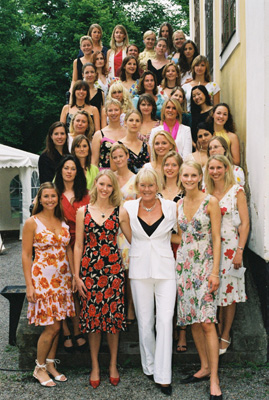