How companies can discover new business opportunities after the crises.

The business landscape post-COVID-19 may be very different from the one before the crisis. Mattias Axelsson notes that looking for new ways of operating both within and outside the company, can reveal possibilities for established firms – if they dare to act.

Preparing for a Post-Corona World

A butterfly's wing stroke in Shanghai can create a hurricane in New York, according to chaos theory. There is a widespread realization that unlikely events with significant impact can actually occur. Yet we are surprised when that happens. Whether a pandemic like COVID-19 really is an unlikely event can of course be debated. However, it is clear that most people nonetheless are surprised by its consequences, not least regarding how it has caused the world economy to come to a dramatic halt.

The consequences are felt both by societies as a whole, and companies in a wide range of industries. And even if the supply chains start back up again, there is a concern that demand will not return quickly. In a larger perspective, we may just be at the beginning of a dramatic change. What new reality awaits post-Corona?

No one can, of course, claim to know the definitive answer. But we can expect changes that will be pervasive in several areas, and thereby increase the demand of innovation. Some examples of critical questions, where the answer likely will impact strategic choices, are the following:

If we add to these developments the potential structural changes in industries that follow the financial consequences of the crisis, it becomes clear that the landscape for individual companies will not be the same after COVID-19. Not preparing for a new reality with many unknown phenomena and situations may prove more costly than the lack of preparation for the immediate (but passing) pandemic crisis.

There are many reasons to ask what corporate executives should do today in order to prepare for the unknown reality following the crisis. For some, it has to do with survival; for others, it has to do with gaining new advantages. One answer is to look inside the company to uncover the hidden innovation potential, and to learn from those who found it before the crisis.

Amazon Web Services and C3 Technologies are two examples illustrating the hidden potential for new business, in the form a business unit and an exit. Amazon Web Services is part of Amazon and is the result of an insight that excess server capacity could be offered to other companies. Now it is the world’s largest cloud operation. Saab had developed an algorithm to generate 3D maps for military use. In 2006, an engineer raised the possibility that the algorithm could have civilian applications. That was the starting point of a journey leading to the spin-off company C3 Technologies, which was sold for $240 million to Apple.

The examples illustrate two important and interrelated aspects: the hidden innovation potential residing in existing resources, and the capability to actually act in order to create something new.

Once we have realized that the COVID-19 crisis may drastically transform the business landscape, we must subsequently realize that tomorrow's business does not necessarily have to have today's as its starting point. Conventional wisdom holds that dramatic changes like these are exploited by entrepreneurs while incumbents stand passive and helpless (e.g. Christensen, 1997).

It does not have to be that way. Because, even though it is far from easy, many established firms are probably in a good position to be agile in the context of the current crisis and come out as profitable contributors to society post-Corona for several reasons. New businesses originating in established companies, which are organized as business units or independent companies, are statistically more likely to survive and become successful than other types of new businesses (Parhankangas and Arenuis, 2003).

A prominent positive, and a crucial difference between new business initiatives which have their roots in established companies, is that the ideas are from the outset derived from knowledge that is grounded in commercial requirements. In addition, the established company can offer a superior resource base, in the form of, for example, administration, experts and equipment, which means that the need for own investments is reduced.

New businesses based in established companies have another tough-to-beat advantage – they have both the competence and structure to “scale” the new business quickly, which is something that is perhaps the most difficult for a new company to succeed in. This is at the heart of innovation, combining resources in new ways that are valuable to customers.

Thus, though the Corona crisis is daunting and puts immediate financial pressure on many firms, established businesses have a good chance of capturing their creativity and coming up with new concepts. By using its hidden potential, the corporate establishment can both create profit and contribute to navigating the challenging waters of the post-pandemic world.

The hidden potential for a new business can exist in different places. The framework below illustrates this. 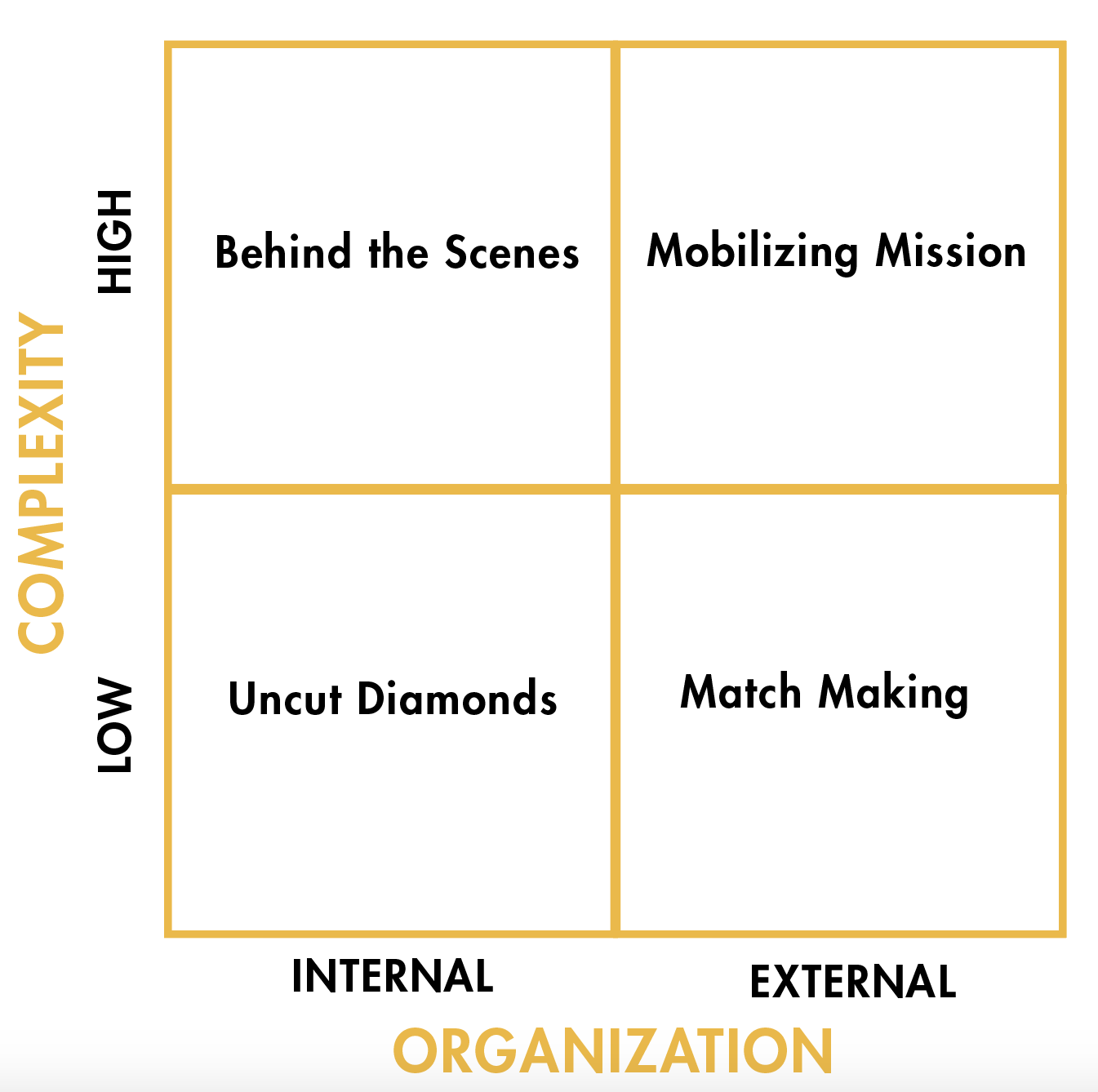 Uncut diamonds are the resources that exist in an organization and that are relatively easy to grasp and delimit. These are, for example, individual patents that have multiple uses or are dormant. It can also include specific competencies or other resources that may have alternative uses.

Match making is the potential that can be found in partnerships with other organizations. It lies in the combination of resources from different organizations, which individually need not be very unique, but which can lead to a sharp offer in the market.

Behind the scenes, many opportunities are hidden in slightly larger organizations. This may, for example, regard combinations of the company's internal competencies and production capabilities that can be used for new brand-new applications.

Mobilizing missions can emerge at the interface between a challenge that customers have (but do not necessarily realize) and the capacity that exists in the combination of different actors' resources. The potential for a mobilizing mission exists in many contexts, but imagination is required to see it.

It is clear that this crisis is a time for innovation, but how far from today's core business companies should aim depends on a number of factors. The creation of new business starts with the decision to invest in ideas that may grow into their own business models outside the existing core. It may be unnecessarily limiting to exclude radical innovations from the outset. However, limited resources, time and money, and risk aversion can naturally be limiting, especially in times of world crises.

It is therefore no wonder that it is a common tendency to want to focus on nearby businesses – business models that can clearly benefit from the core business. This is often wise, as it can be a relatively quick path to new revenue. You can get leverage with, for example, existing production and distribution systems. In the immediate phases of the COVID-19 crisis, this means turning vodka into hand sanitizer and auto parts into ventilators. These examples illustrate that you do not have to look far to find hidden potential, and that it can be realized fast.

For those with a long term perspective and feeling ambitious, there are opportunities to go further from the core. Along these lines, it is not hard to imagine that many companies, in the wake of COVID-19, will steer their business offerings in a radically greener direction, for example. A decision to search for the hidden potential represents a first step in reorienting the company from today's known territories to the unknown.

Going from words to action

The COVID-19 crisis has shocked the global economy. Trends of change that we have seen coming for a long time are now accelerating. The combination of financial pressure in the short term and subsequent changes in competitiveness, along with the power of the underlying trends in the long term, provides the basis for rapidly changing conditions for today's companies. Those who still want to be in the game after the crisis need to start reorienting.

The hidden potential is a source of reorientation. It is found in today's organizations and in external relations. During the crisis, we have already seen companies that have both realized and utilized their hidden potential. It is important to have real will, for the journey ahead may not be easy and short.

The COVID-19 pandemic has thus far caused a level of chaos few anticipated, especially with regard to the economy. In the short term, there is an urgent need to deal with the acute effects of the crisis. In the long term, the pandemic may shift the paradigms of business with current business models becoming obsolete. Though many firms now face severe threats, this crisis can help organizations to step out of their comfort zone and harness their hidden potential. The COVID-19 cloud too has a silver lining.

Mattias Axelson is an affiliated researcher at House of Innovation at Stockholm School of Economics.