Stockholm currently has some of the most successful high-tech startup companies in the world. New findings from a research team at the Stockholm School of Economics suggest that infrastructure, networks, business climate and supportive policies are key factors that explain Sweden’s success. The research report is part of the Innovative Internet project, funded by the Internet Foundation in Sweden, IIS.

When evaluating the number of “unicorns”, i.e., high-tech startup companies valued at 1 billion USD within 10 years of founding, Stockholm stands out as the city with the most unicorns per capita in the world.

In the report called “Chasing the Tale of the Unicorn – A study of Sweden’s misty meadows“, the research team, led by Professor Robin Teigland, outlines Sweden’s IT and Internet development from 1980 to today, focusing particularly on the late 1990’s IT boom and bust, and the influence on present conditions.

- One finding is that the experiences and money gained by entrepreneurs and others during the 1990's IT boom and bust have been fed back into Stockholm’s entrepreneurial ecosystem, enabling today’s entrepreneurs to successfully overcome the many challenges to success, says Robin Teigland, Professor at the Stockholm School of Economics and leader of the research team.

The report also shows that successful startups in fast-paced environments are those that are able to leverage their formal and informal networks to gain access to necessary resources. The researchers investigated business networks of 15 Swedish startups, where four have unicorn status and 11 are considered to be within unicorn reach. These 15 startups exhibit an increasing diversity both in terms of age and international composition of their boards and top management positions over time.

This report presents the preliminary results of The Innovative Internet project, a three-year project funded by the Internet Foundation in Sweden, IIS. The project’s primary objective is to examine how the internet and digitalization have influenced entrepreneurship and innovation in Sweden. 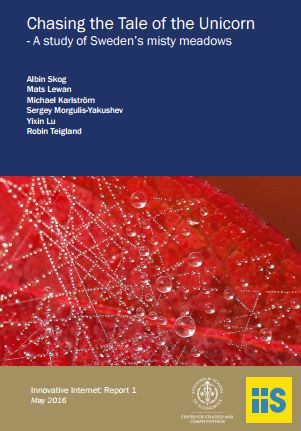 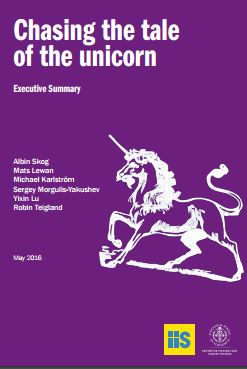