We are proud to announce the winner of FEOY 2009 - Carolina Lindholm. Carolina Lindholm holds a Master’s degree in Economics from the Stockholm School of Economics, where she has majored in health economics and international trade.

She has also studied philosophy at Stockholm University and is currently enrolled in an exclusive one-year program in political writing and opinion formation with the most well-renowned think tank in Sweden. Carolina has further successfully participated in the prestigious leadership program Global Village for Future Leaders of Business and Industry in the United States and has been instrumental in establishing the Model United Nations concept in Sweden. This past fall, Carolina interned with the Swedish Ministry for Foreign Affairs’ representation to the WTO in Geneva. She has also worked with prominent health economists at the world’s leading health economics consulting firm i3 Innovus and this summer, she returns to Geneva for an internship with the WHO’s department of Trade, Foreign Policy and Global Health Diplomacy, before starting her program with Pfizer in October 2009.

Carolina is born and raised in central Stockholm. Her mother, Margareta Lindholm Larsson, is a school principal and her father, Torbjörn Larsson, is an engineer. She has a twin sister, Lovisa Lindholm, who is a law student at Lund University. In her free time, Carolina enjoys socializing, traveling, electronic music, modern art, British comedy and scuba diving.

The Female Economist of the Year Award Ceremony 2009

The Female Economist of the Year 2009 award ceremony took place on June 1st in the beautiful historic settings of the Confidence theatre just outside of Stockholm. The 150 plus guests, stemming from top levels of business, government and academia, were greeted by members of the Barbro’s Best and Brightest (BBB) network, and enjoyed a champagne mingle before filling the seats of the theatre hall. The Master of Ceremonies for the evening was none other than Alexandra Charles, who guided the audience through an impressive array of performances and speeches. This year’s theme for the evening’s entertainment was the 100 year celebrations of the Stockholm School of Economics, and the performers chosen are all affiliated with the school in some way – many being current or former students. The talent of the SSE demonstrated that it goes well beyond business administration and economics, as the audience was treated to memorable musical and dance performances, including much appreciated performances by the clarinet player Markus Forss and the SALT women’s choir.

Then Barbro Ehnbom – initiator and founder of the FEOY scholarship and the BBB network – took to the stage. In her speech, Ms Ehnbom addressed the past year’s very disappointing performance in terms of the number of women on Swedish company boards. Ms Ehnbom was followed by Professor Lars Bergman, principal of the SSE, who took the opportunity to present Ms Ehnbom with the SSE award for her important services and contributions to the school and to Swedish business. Nikolaj Sörensen, CEO of Pfizer Sweden, was the evening’s final speaker from the FEOY selection committee. Mr Sörensen spoke of how this year’s winner – Carolina Lindholm – had stood out from her competitors in the application and interview process.

Inspirational speaker of 2009 was Agneta Nilsson, founder of the SWEA network. Ms Nilsson spoke of the Swedish female as a very important export and congratulated Ms Ehnbom on her initiative Best Male Support – indicating the importance of involving men in the promotion of women leaders. Ms Nilsson further presented Carolina Lindholm with a membership in SWEA. Then, it was time for the FEOY 2009 Carolina Lindholm to take the stage to receive the FEOY glass sculpture and give an applauded speech on the value of courage (see below). Finally, the award for Best Male Support was presented to Anna and Erik Belfrage. This marked the end of the award ceremony and guests finished the evening enjoying dinner, wine and each other’s company in the beautiful surroundings before heading off to Grand Hotel for the traditional night-cap.

Thank you. Excellencies, Ladies and Gentlemen, to my family and friends:

I am very happy to be standing here, as the recipient of this prestigious award and for being granted such a wonderful opportunity with Pfizer. Winning Female Economist of the Year has been my goal for several years and I have worked towards it – so this feels like a true victory!

I wish to use my three minutes with you to say something on one of my favourite themes – courage. Because even applying to win FEOY, I would say, is an act of courage – we have all seen the opportunity and, more importantly, taken action towards it.

To dare to dream big, to have faith and confidence in one’s abilities – whatever they may be – , and, perhaps to not be too afraid to look a fool, I believe, are necessary conditions for true success. And more so than talent or formal education – although

that of course helps. The philosopher Bertrand Russell and the country music star Dolly Parton probably never met, but will do so here tonight. He said: "To conquer fear is the beginning of wisdom.". She said: “You'll never do a whole lot unless you're brave enough to try.”.

I agree with both of them. Being fearless is my greatest aspiration. Whether that will take me to the top or not – time will tell.

Speaking on reaching the top, we mustn’t forget the reason why we are all here. That is, we feel that things aren’t quite right at the executive level of Swedish industry. In the past year, only one more woman (net) has been elected onto the boards of Sweden’s 250 publically listed companies; leaving the total share of women at less than 20%. The reasons for this poor performance I honestly don’t know. Barbro Ehnbom, and other experienced women and men in this audience will probably have better answers. But the ambition to change – to do better – is the foundation for the Female Economist Scholarship and the BBB and friends networks. I will do my very best to realize this ambition. And I hope that you will to.

I would like to thank, first and foremost, Barbro Ehnbom – without whom none of us would be here this evening. I would further like thank Nikolaj Sörensen and Ellinor Skogsfors at Pfizer, Lars Bergman of the Stockholm School of Economics and the whole of the selection committee for your faith in me. I will do my best to honour your expectations. And I would like to thank my family for your unyielding support. Especially my mother for being a great role model. Happy mother’s day and thank you all. 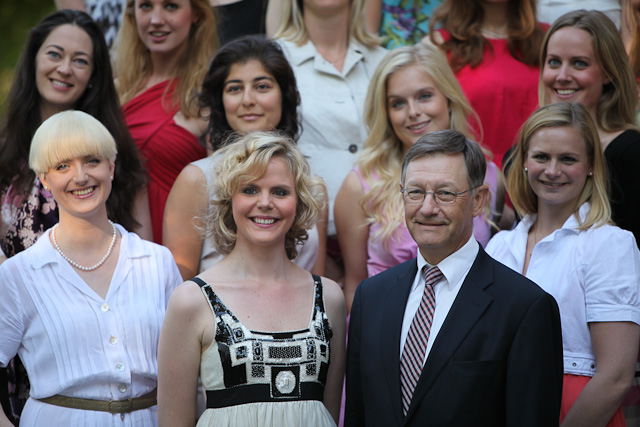