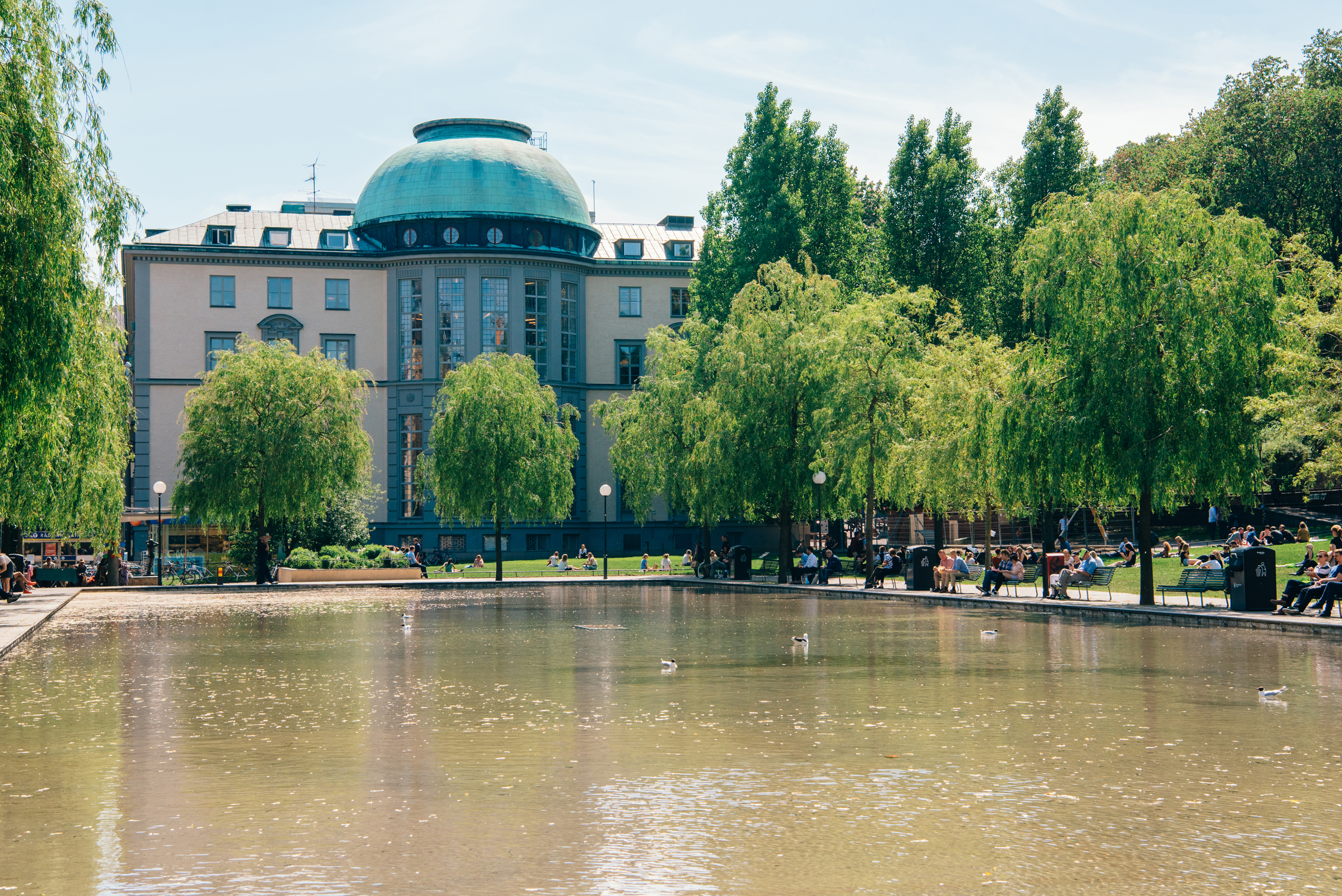 During its infancy in the early 1900s, the Stockholm School of Economics was merely a bourgeoning idea in the minds of a few prominent Swedish businessmen, who were interested in educating future leaders in the first wave of globalisation. They needed to secure the skillsets that the international emerging markets demanded. The SSE Association was found-ed and the key figures Joseph Nachmanson, Olof A. Söderberg and K.A. Wallenberg had shortly thereafter secured enough funding for the school to be realised with Carl Hallendorff (1869-1929) as its first president.

SSE admitted its first students on October 1 in 1909 and out of a total of 110 students, there was not a single woman. Something that mirrored the inequality in the workforce in general. During the early twentieth century women in Sweden were not allowed to work evenings and nights, they were not permitted to work underground and were explicitly forbidden to work side by side with men in certain professions. These were just a few of the restrictions on women's rights that the suffragettes and other progressive movements were starting to oppose, but these structures ran deep into the fabric of society.

Today 40% of students at the undergraduate level at SSE are women (2010) and this is just one of many developments of the school since its inauguration.

During the first 17 years, 1909-1926, SSE rented two floors of a residential building at Brunkebergs torg, called Brunkeberg's Hotel. Other residents of the building included Albert Bonnier, founder of the publishing house Albert Bonniers Förlag, Lars Johan Hierta, founder of Sweden's second largest newspaper Aftonbladet and artist Edward Bergh. In an inter-disciplinary fashion, art and culture has always been associated with the school and its various departments.

The initial curriculum covered five core subjects: economics, commerce (later becoming business administration), economic geography, language and a combination of political
science and law. It was developed as a synthesis of the needs of society as well as being modelled on British and German educational systems. Almost 90 years later a similar demand for educated business leaders and economists was growing in eastern Europe, in the wake of the collapse of the Soviet Union. Initiated by SSE president Staffan Burenstam Linder, in response to this new demand, a new branch of SSE was founded in Riga, Latvia in 1994 and
one in St. Petersburg, Russia in 1996.

The growth of SSE prompted several of its founders as well as other benefactors to donate funds for a new building, among them Knut and Alice Wallenberg Foundation, C.F. Liljevalch and Axel Johnson. The city of Stockholm was instrumental in the formation of the school since it owned significant areas of land in the inner city which were later offered to the SSE Association. But it was not until 1926 that the students and teachers could move to its current
facilities at Observatorielunden, in a building designed by Ivar Tengbom, Swedish architect and professor at the Royal University College for Fine Arts. As an architect, he was at
the time "in between" the aesthetic styles of Nordic classicism and Swedish functionalism, or "international style" as it was known abroad.

In preparation for the SSE commission, Tengbom joined forces with president Carl Hallen-dorff and travelled to Holland and Britain to study the design of educational buildings during 1919. Three years later Tengbom presented his sketches to the board of directors and the faculty committee, who authorized the project and started the construction process in 1924.

Tengbom worked in a style highly influenced by cultural critic John Ruskin who sought to form a symbiotic relationship between architecture and nature and so not to be in opposition to each other. During his early years as an architect he was also influenced by Finnish art theorist Yrjö Hirn, who in 1900 gained prominence by publishing his dissertation The Origins of Art, which promoted the idea of studying art from a social and psychological perspec-tive. But in his later professional work he turned to the Le Corbusier-inspired style of Swedish functionalism, by developing the fin-de-siècle Art Nouveau, into a very unique Swedish form, today known as "Swedish Grace".

Swedish Grace was a counter reaction to the Art Nouveau and Jugend styles favouring of organic, floating elements in both art and architecture. Most notable proponents of this
were Antonio Gaudi, Viktor Horta and Gustave Klimt. Swedish Grace is in contrast characterized by its streamlined classicism, simplified forms, refined delicate surfaces
and materials.

Tengbom envisioned an L-shaped building with a grandiose entrance with two Doric columns framing the entryway with the possibility of later additions, as the school grew. The "academic core" in Tengbom's vision was the library and consequently has a prominent
position in his initial vision. Together with the aula (auditorium), it forms the rotunda that functions as the physical and spiritual backbone of the school building.

The board room was initially planned as the last room at the end of façade seen from Svea-vägen. It would host the Board of Directors and feature an 8-metre-long wooden table and chairs in neo-classical style, with a slant toward the functionalist aesthetic that would dominate that next few decades in Swedish architecture. Tengbom designed the chairs and the table himself and the furniture was then manufactured in the workshops of Nordiska Kompaniet in Nyköping.

Although the building gained much appraisal in the first decades, it would not take long before SSE needed additional facilities due to expanding demands, and in 1975 and
1976 two extensions were made to the building by architect Åke Ahlström (1918-2001), to house offices for the administration and researchers. By 2008 it became clear that the
school needed additional teaching facilities as well. Through a donation by the Knut and Alice Wallenberg Foundation the entire courtyard was covered by a glass rooftop and several new lecture halls and seminar rooms were built.

Although business, economics and finance has always been at the core of the school's curricula, interdisciplinary knowledge was also always part of it. Social and behavioural science, art, law, psychology, sports, language and many other subjects have shaped the
school and its history as we see it today.

In one of the most widely read books on economics, Robert Heilbroner's The Worldly Philosophers: The Lives, Times and Ideas of the Great Economic Thinkers, (1953) the final paragraph offers an epistemological lesson for future economists, today perhaps more important than ever. Heilbroner argues that our future depends on advancing the holistic,
and one can also argue aesthetic understanding of the world: "Economics alone cannot guide a country that has no vital leadership, but leadership will lack for clear directions without the inspiration of an enlightened as well as an enlarged self-definition of economics. Assuredly such a new economics will incorporate knowledge from the domains of other branches of social inquiry...".