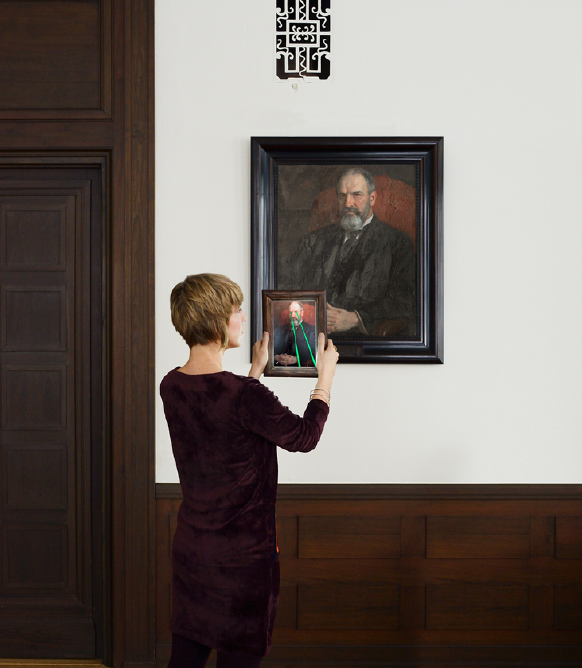 On the wall of the board room they hang in a row: strict, well-dressed older men. They look dignified, which is of course how people about to be immortalized wish to appear — those who know their image will gaze down on coming generations, long after they themselves are gone. Later that awareness presumably generated a solemn feeling when the gentlemen on the wall, each on his appointed day long ago, went to sit before an artist to have his portrait painted.

Their setting adds yet another layer of gravity to them: a secluded room, tall, straight-backed chairs around a large table where people with power hold important meetings. The motley Sveavägen feels far off — almost as if it belonged to a different world.

I asked if that was certain. It would otherwise have seemed almost a little too good to be true. Were it logical, the man reading the news should have been able to see us looking at him, because we could see him. I imagined how his eyes wandered over thousands of faces, saw into their lives and living rooms, saw me in the brown corduroy couch.
Dad said that it was certain. They couldn't see me.

To test if it was really true I stuck out my tongue at the man in the news. I remember my entire body bubbling with delight over being able to do it—not because I wanted to offend him in some way, but because it was such an overwhelming experience of testing a limit, of taking a small, innocent liberty against a serious man in a suit. —The first impulse of fiction is the thought that reality could have been otherwise. That what has come to form existence could have played out differently because it could always have taken hundreds, perhaps thousands, alternative routes depending on coincidences that occur every day, all the time. A bus that we miss or catch, a cold that affects us or not, a glance that we return and keep or let pass and move on, an invitation that we respond yes or no to, if we look before crossing the street, if we pick up on an unknown number. If you have begun thinking like this it is hard to stop. Everything could always have been different.

The art of Bella Rune reminds us that parallel stories transpire constantly. She lets us take part in a few of these through our smartphones and tablets: alternative versions of reality, small gaps in everyday life, departures from the habitual. Perhaps one thinks that one knows how the world works, perhaps especially one believes so in a room like this, where there almost seems to be a script for what's going to happen, a script written by the room itself. And then Bella Rune suddenly opens a window onto Sveavägen, and lets us be seen in turn by a man in an austere suit. Perhaps we might even poke a little fun at him.

Suddenly the script ceases to apply.

Today, a man's portrait from the late 19th century appears as not only remote in time, but remote as art: perhaps more of a formality and documentation—almost as part of the interior— than a work of art in its own right. Bella Rune not only activates the men framed on the wall, but also enlivens the artworks themselves. Suddenly the depictions

become urgent, unpredictable, as if an acquaintance one thought one knew nearly everything about had suddenly revealed a secret, something one never had expected, which will forever mean that one sees that friend in a new light.

We are reminded of the randomness of everything, too. That what is caught in history books and in the portraits, is only a fragment of people's lives, perhaps far from what they would have chosen had they themselves been able to choose. The men presented in the portraits sat before the artist only a short while, during which time they were perhaps thinking about something utterly different: what they were going to have for dinner, what they were going to
do for the weekend, a book they had read, or someone they had recently met and who they might be falling in love with. Perhaps it was snowing outside. Perhaps they rose from the chair afterwards, stretched themselves a little, put on their coat, and went home to that part of life which consisted of other things than having your portrait painted.

To what felt more important but never went down in history.