On May 2nd, the Center for Sports and Business was invited to a partner event organized by Hammarby Football at Biblioteket Restaurang & Bar where Center Director Martin Carlsson-Wall held a lecture on the topic Life after COVID-19: How to become a winner? for Hammarby’s partners. The day was wrapped up by watching Hammarby’s home game against Malmö at Tele2 Arena.

The partner event at Biblioteket Restaurang & Bar was organized by Hammarby Football for their partners and included lectures given by Tommy Boustedt, Swedish hockey coach and sports administrator, as well as Martin Carlsson-Wall, Director for the Center for Sports and Business at the Stockholm School of Economics.

Tommy Boustedt on How to become successful? What defines a winner?

The event kicked off with a presentation given by Tommy Boustedt. Boustedt is a Swedish hockey coach and sports administrator with an impressive sports career. Currently, he works as a European pro scout for the Detroit Red Wings in the NHL (North America’s National Hockey League) and as an advisor for the Danish ice hockey team, and as a senior advisor for Hammarby Hockey. He is most known for his long coaching career where he has been the head coach for Hammarby IF, Djurgårdens IF, IK Vita Hästen, Linköpings HC, and Frölunda HC. He has also been an assistant coach for the Swedish national men’s ice hockey team. Boustedt also has a history at the Swedish Ice Hockey Association which he joined in 2001 as development chief, being promoted to Secretary General in 2014 and stepping down from this role in 2020.

In his presentation, on the topic of How to become successful? What defines a winner?, Boustedt combined lecturing on the history of Hammarby Hockey with describing ten elements that are more important than innate talent for success, be it in sports, working life, or somewhere else. The ten elements outlined by Boustedt included the following: 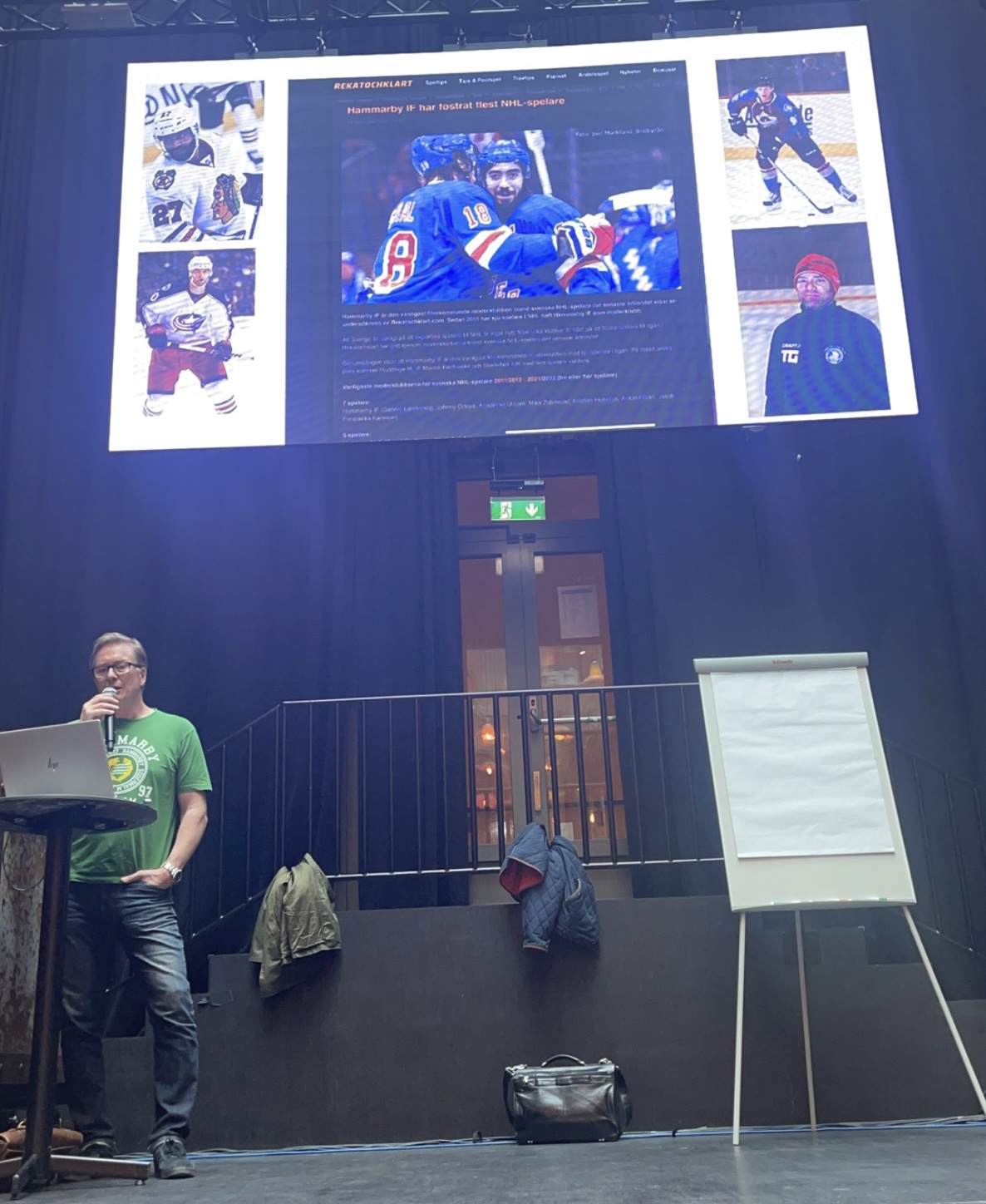 Martin Carlsson-Wall on Life After Covid-19: How to become a winner?

After Tommy Boustedt’s very interesting presentation, our Center Director, Martin Carlsson-Wall, held a lecture on the topic of Life After Covid-19: How to become a winner? where he, firstly, addressed two hypotheses, one concerning that differences between winners and losers will be larger after Covid-19, and the other about that hybrid organizations possess unique opportunities to become winners after the pandemic. Further, he also mentioned Hammarby Football’s development journey, the development of the global sports market, Nicolai Tangen, CEO of the Norwegian Oil Fund as well as the phenomena of padel and Topgolf. Lastly, Carlsson-Wall touched upon the issue of how Hammarby can organize itself so that it profits from the positive forces of passion. Here, he outlined three core issues: temporal balance act (history versus future), geographical balance act (the local versus the international) as well as an identical balance act (new perspectives versus the risk of mission drift). 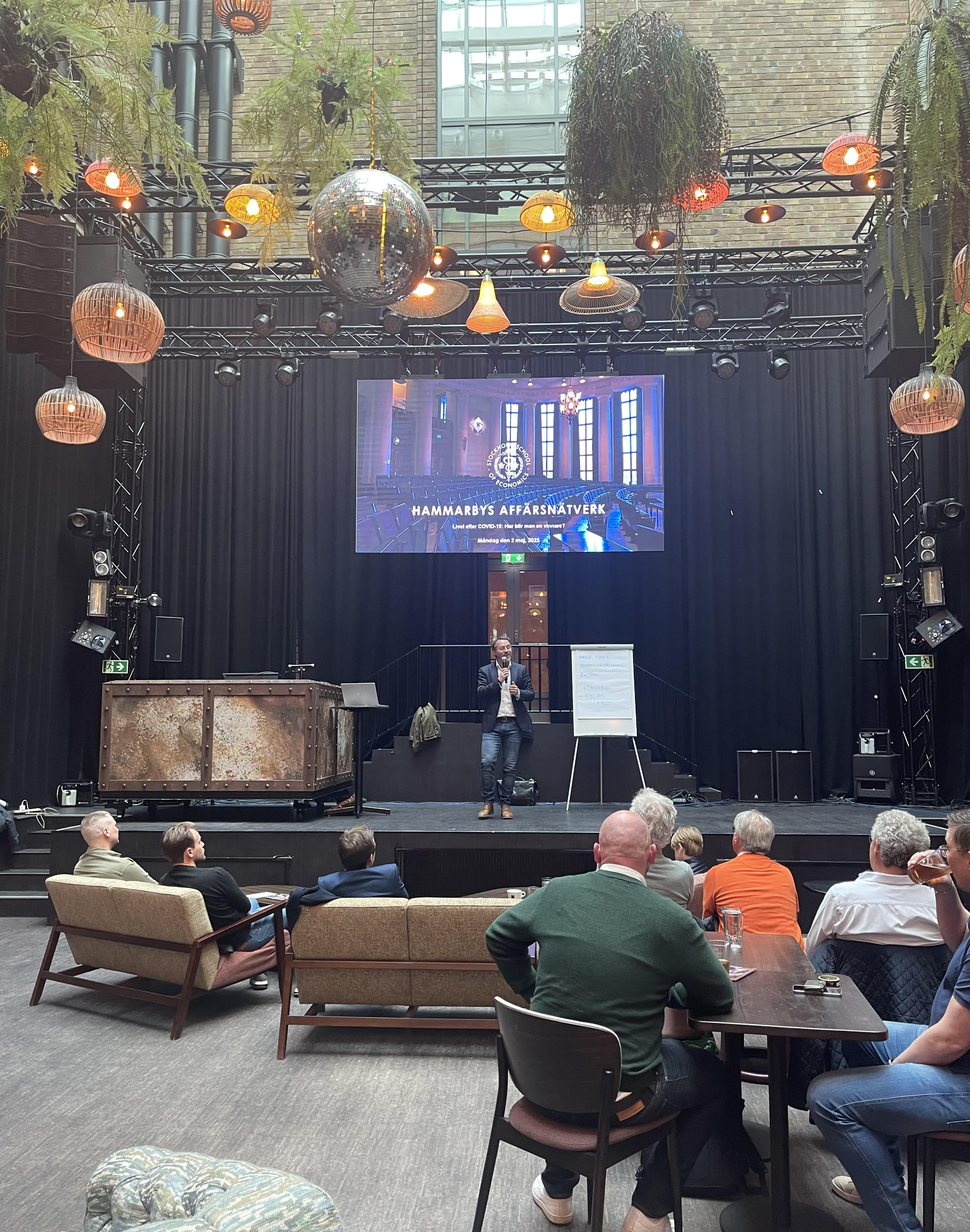 Martin Carlsson-Wall, Center Director, giving a presentation for Hammarby Football’s partners on the topic of Life After Covid-19: How to become a winner?

After the partner event was wrapped up at Medborgarplatsen, representatives from the Center for Sports and Business concluded the day by attending Hammarby Football’s home game against Malmö FF in a crowded Tele2 Arena. 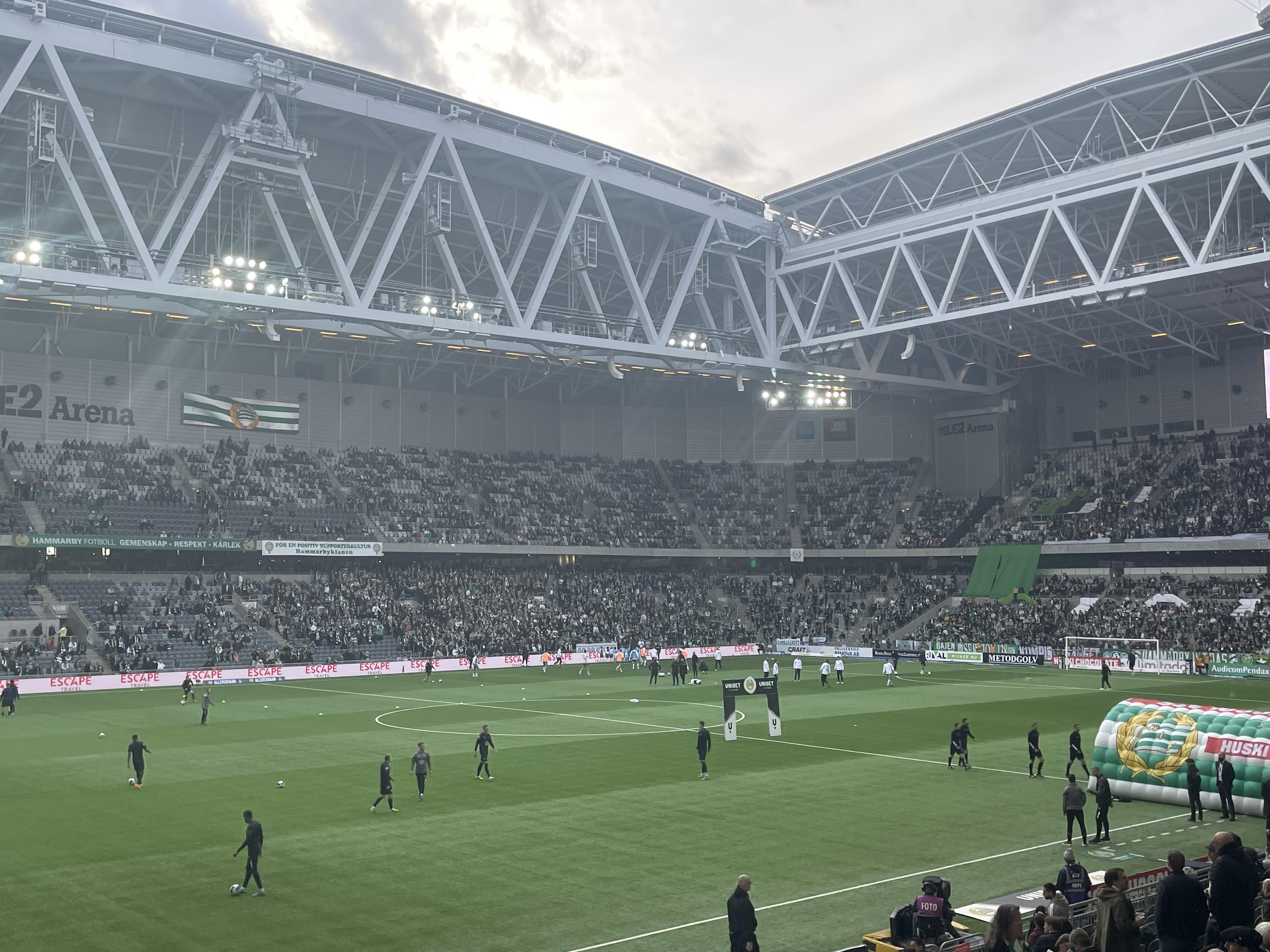 Players preparing minutes before the start of the match 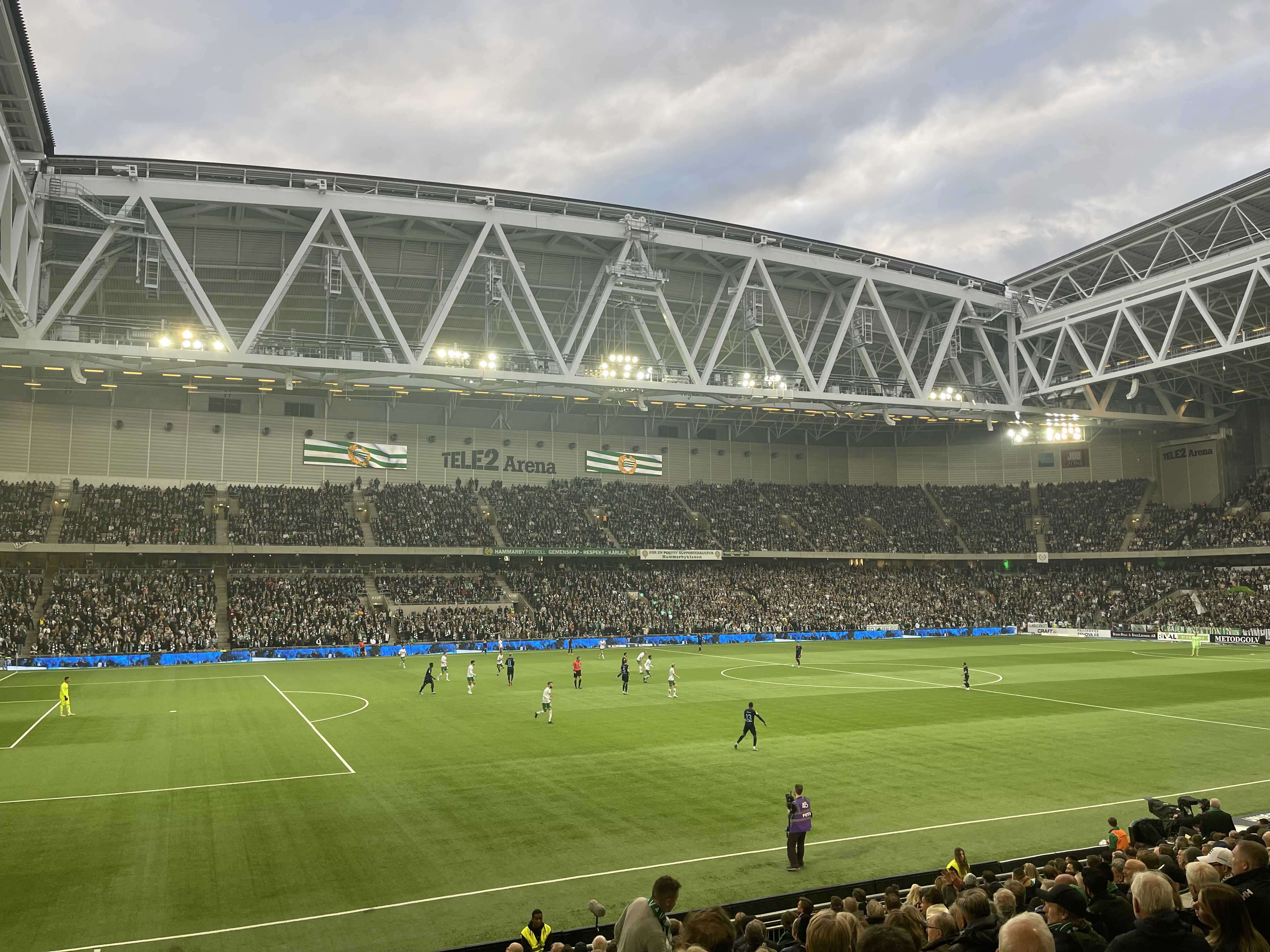 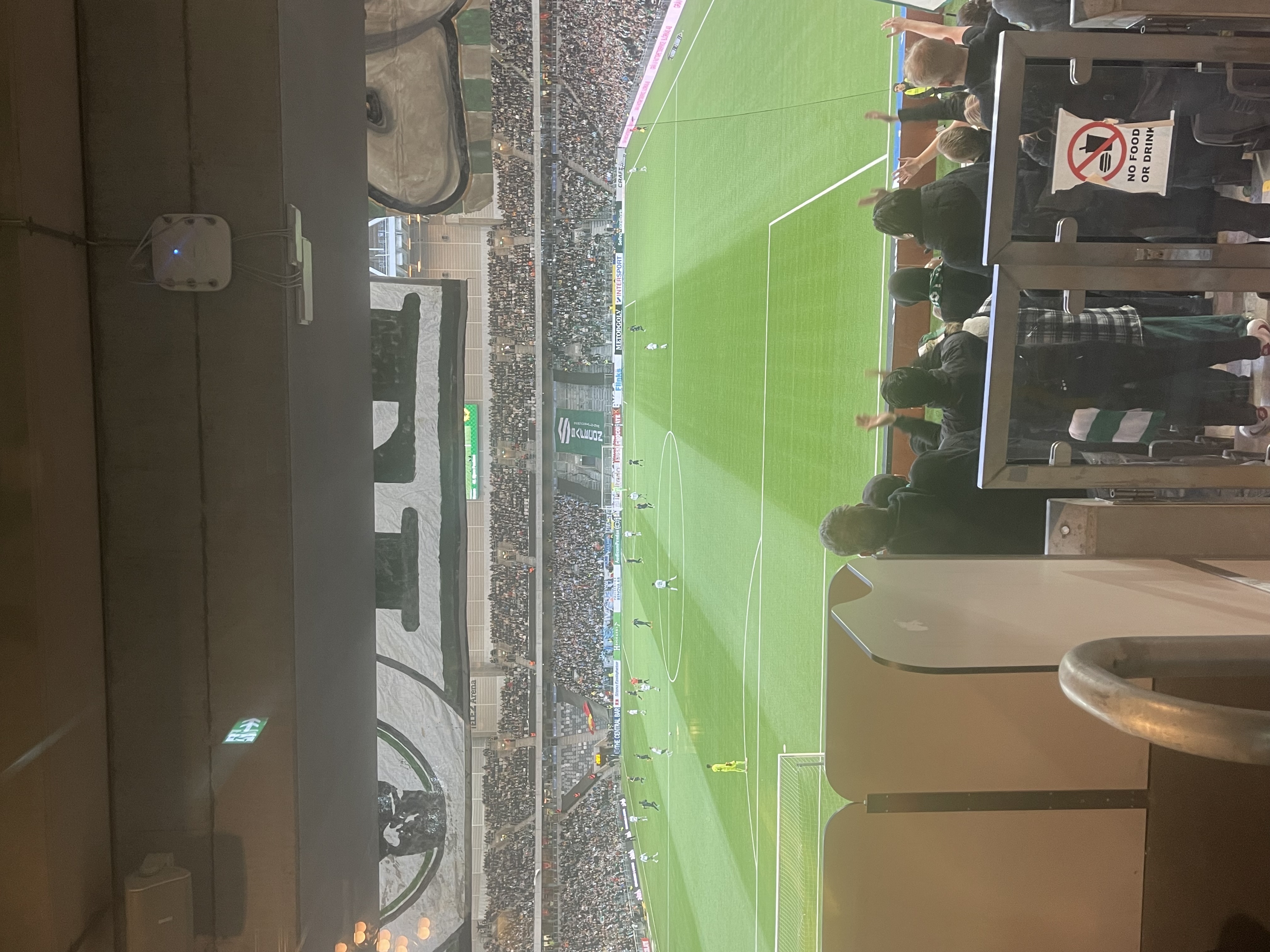 View from the VIP Lounge