Leadership in times of corona

Demand for leadership is always greatest during a crisis. But what characterizes strong leadership? Two leadership researchers from the Stockholm School of Economics take a look at why leadership in Sweden stands out from the rest of the world.

In times of crisis, we expect leaders to step forward and show us the way in a convincing manner. Expectations are often expressed through a desire for strong leadership. What is meant by strong leadership is rarely clear, but it often means leaders who take action, or charismatic people who can easily convey powerful and clear messages, explain Ingalill Holmberg and Pernilla Petrelius Karlberg, both researchers in the field of leadership. These leadership ideals are archetypes that we all recognize from media, film, literature and, to some extent, research.

When leadership goes against dominant beliefs, it is called into question. Leadership is then depicted as flawed and inadequate. The leadership exercised to combat the spread of the coronavirus infection in Sweden has been met by distrust and questioning – at least abroad.

“In international media, the Swedish management of contagion control is described as an exotic, experimental workshop and in the media reporting, individual leaders have repeatedly been subjected to harsh criticism. The lack of specific action is a recurring theme, as well as an inability to provide clear answers to difficult and complex questions”, says Ingalill Holmberg.

So, does that mean that Sweden has taken the wrong path? That the current line of action that the government is pursuing should be replaced by leadership with greater support and higher immediate acceptance internationally? Not necessarily, the researchers say. The most obvious reason is that the coronavirus follows a course of events that no one can really predict. Since the uncertainty is so great, it is inevitable that those who have significant influence over efforts and measures must try different ways and at the same time choose strategies that are perceived as legitimate in Swedish society.

The big difference between Sweden and many other countries is that the leadership that is exercised to deal with the spread of infection and the economic consequences in Sweden is based on a leadership practice that places great confidence in people's ability to take responsibility for themselves. And the strategy has been popular with many Swedes. Confidence in the government has grown since the outbreak, and the Public Health Authority's Anders Tegnell has gained near celebrity status.

“By constantly reminding us that we all have a responsibility, we become involved in decision-making and thus in the efficacy of the measures that are implemented. The ability and willingness to collaborate become absolutely crucial to whether the efforts work or simply collapse. It is basically a combination of self-leadership and a capacity to, together with others, contribute to both acute problem solving and the overall goals that are formulated by authorities and politicians”, says Pernilla Petrelius Karlberg.

Ingalill Holmberg and Pernilla Petrelius Karlberg believe that the chosen path is not only reasonable,  but perhaps even the best way to tackle the crisis in Sweden. The researchers point out that all change that does not happen through coercion is based on trust, and how trust is built is culturally conditioned. In a society that has high faith in meritocracy and knowledge, evidence-based facts and expertise gain a prominent position.

”It’s no coincidence that experts in different fields are given a great deal of airtime in the current debate and get the attention and respect from the Swedish public. In other countries and other cultures, the expectations of leadership may look completely different. The Danish government's decision to close the border to limit the spread of infection was not based on any scientific recommendation from the Danish health authorities. It was a political decision based on the politicians' assessment of the expectations of Danish society”, says Ingalill Holmberg.

The practice of authority and leadership made visible in the fight against COVID-19 reflects notions of how power and influence should be expressed in a democracy where teamwork, dialogue and knowledge are strong values, the researchers say.

“Leadership that does not capture the basic values of a society is doomed to fail”, says Pernilla Petrelius Karlberg.

The few leaders who appear in the media cannot oversee the resources needed to deal with all the problems that arise in society. There we see examples of leadership shouldered and shared by many, explains Ingalill Holmberg.

On a daily basis, we see examples of how companies, organizations and individual actors actively take responsibility and practice leadership in delivering innovative solutions to the problems that must be dealt with in the wake of the spread of the coronavirus. Suddenly, we see the birth of partnerships where people help each other out wherever possible. Truck manufacturers send their logistics experts to companies that produce medical equipment to manufacture respirators.

Within municipalities, staff is moved from cultural and leisure committees to assist in elderly care. Individual initiatives are helping to quickly train groups for completely new tasks, protective clothing is made in gym halls by people who coordinate new areas of expertise and neighbors work together to do grocery shopping for risk groups.

Whether the chosen strategies and approaches are enough to fight the COVID-19 infection remains to be seen. The single biggest challenge for the leaders who are now at the center of events is to build real-time trust under extreme pressure and extreme uncertainty when anyone with a smartphone and access to social media can enter the debate, question and deliver reviews on how the crisis is handled day by day. 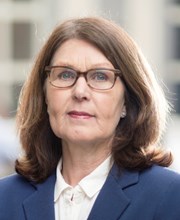